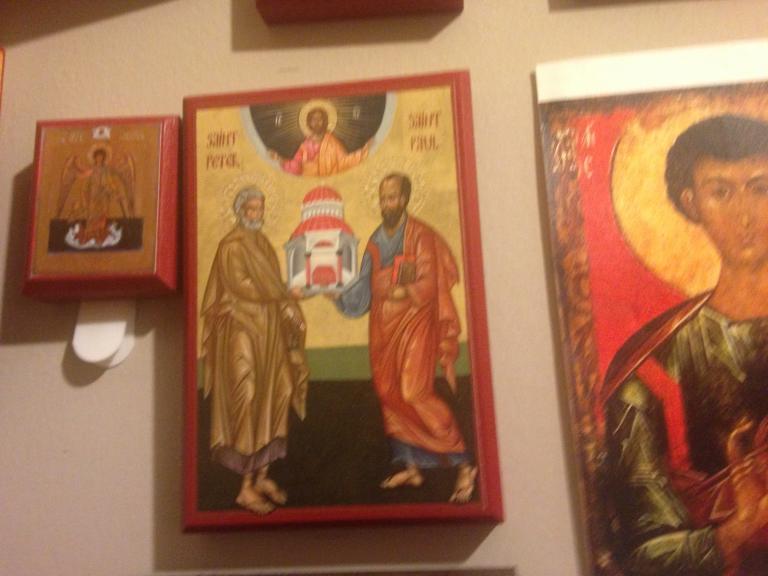 “You will pray even in Spanish and Chinese”: on the Holy Apostles Peter and Paul (Fast of Saint Philip # 7)

When I told my friends that I was going to be baptized in the Kiev church in the weeks leading up to this in June 2016, the formula I was using was that I was seek communion with the Bishop of Rome through the Church of Kiev. It wasn’t wrong because that’s exactly what happened, but as things go into mystagogy, I now find the wording a bit immature. Perhaps, I think, are the apostles on whose day I was christified, the Holy Apostles Peter and Paul, who have helped me to grow through my immaturity.

The Holy Apostles Peter and Paul have been in my beautiful corner almost from the start, and when I acquired their icon, I was very particular about which one I wanted. There are icons of the apostles kissing each other, icons of them standing aside, icons of them being on the hills of Rome, but the one I had to have was the one where they share the support of the church, with the Lord Jesus blessing them from heaven. This is the image I saw when I was received into the church on epitrakhil of my spiritual father. It was on the tetrapod before which I bowed and on which was placed the book of the Gospel on which my sins were forgiven. It was at their sight that I was Christed, sealed with the gift of the Holy Spirit by joining the Catholic Church.

I say my original formulation of seeking fellowship with Rome through Kiev was immature because that is only one aspect of what happened when I became a Catholic. It can be said that the understanding of Byzantine Christianity that we received from our mother Church, Constantinople, was one that was fully in communion with the Latin Church of Rome, and in seeking to restore sharing at the table, our participation in the Second Council. of Lyon and the Council of Florence-Ferrara finally led the Orthodox Metropolis of Kiev to sign the Union of Brest to guarantee the maintenance of our traditions while communing with our sister church in Rome. It is, as our Bishop Benedict of Chicago says, our own Tomos of autocephaly, a Tomos that allowed us to be truly Catholic in ourselves because it meant we didn’t have to be Catholic or Orthodox. but to grow organically with full awareness of what it means that all things are ours in Christ. Communion with Rome is a major implication of our catholicity in ourselves. How could we not be in fellowship with our sister church if we are truly Catholic?

But a year after my chrismation, the installation of Bishop Benedict by the Patriarch in the Eparchy of St. Nicholas in Chicago deepened my understanding of the church I had entered. Appealing to the Holy Apostles Peter and Paul for whose feast the service took place, Patriarch Sviatoslav instructed Bishop Benedict to reach out to everyone. He said:

But at the same time, at the same time, the apostle Paul was telling us that this eparchy has a specific characteristic because it unites people not only of Ukrainian origin or origin – this eparchy prays and celebrates the Divine Liturgy at the both in English and Ukrainian. , but a lot tomorrow following the spirit of St. Paul, you will pray even in Spanish and Chinese, because we are a Ukrainian church, but not a church for Ukrainians. We are a church of Christ, with the universal message of his gospel, which is open to all who want to receive eternal life through the ministry of the new bishop to proclaim the word of God, to sanctify the people of God with the sacraments, and to rule this church in the name of Christ.

What it means to be truly Catholic as the Church of Kiev, in other words, is that we are not the ethnic chaplaincy of the Latin Church. We are Catholics in ourselves, which means that we not only address Ukrainians, but “even pray in Spanish and Chinese” in addition to English and Ukrainian. My spiritual father and I, watching from Richmond, fell from our chairs. Our temple in Richmond prays in Chinese.

The apostolic impulse of this sense of catholicity are the saints on the day of which I was Christified, the Holy Apostles Peter and Paul. The meaning of their martyrdom in Rome goes beyond the place where they gave their lives. In their letters that form the scriptures that our church reads at the liturgy, they describe what makes a church Catholic. In itself, the local church is kept together in the common life of love. This unity is vast, and what it means to evangelize is not to join the empire, but to expand the circle of that love throughout the city in which we gather. The word to describe evangelism is not only evangelical; this is Catholicism because it is love that makes us Catholic it draws more people into fellowship in the Lord. This is the truest sense of the icon of them holding the church high: through them the church is made up of this love.

When I see them, the words of the song of the Latin Church ubi caritas come to mind. Not only have I entered into fellowship with Rome in the Church of Kiev, but more importantly I am reunited with the people of God in the local Church of Kiev which is not constituted by ethnicity, but by the love itself. Deepening my mystagogy in this church, the song evoked by the apostles-patriarchs is as follows:

These reflections on the icons in my beautiful corner make up the series I am writing for this year’s St. Philip’s fast in preparation for the feast of the Nativity, starting with the old calendar as I am in Chicago and moving on. returning to the new schedule when I return. in Richmond in mid-December. These are attempts to account for my conversion process in the Kiev Church without neglecting the Chinese Christianity of my Protestant past. This post is the seventh.

Previous articles focus on the Cross of San Damiano, the Trinity of Rublev, the relationship of the Black Madonna to the Kiev Oranta, the Pantocrator of Sinai in relation to the Dormition, the “angels and archangels”, and the prophet Jonah with Moses, Elijah, and John the Baptist.

The geopolitics of the New Independent Church of Ukraine