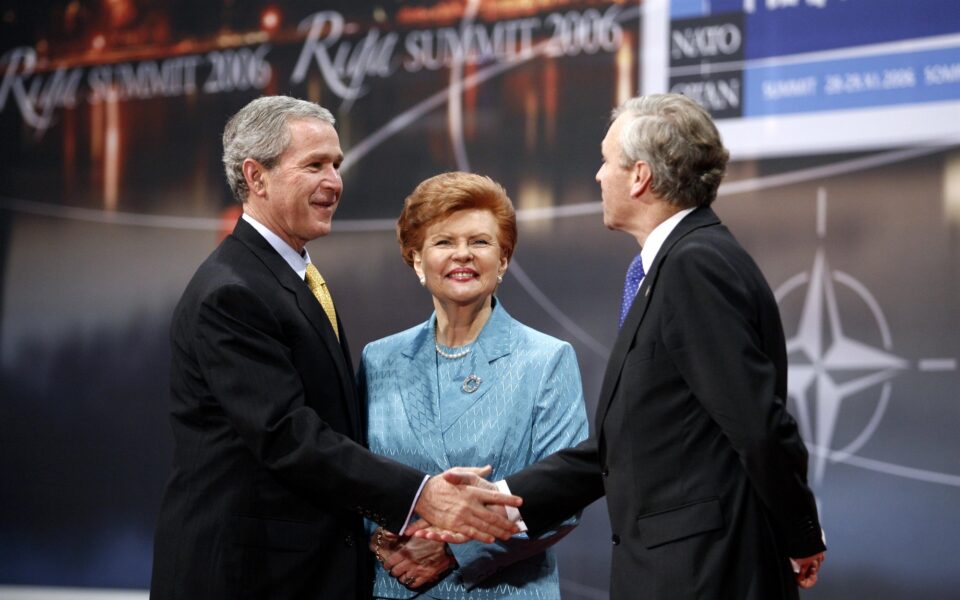 Vaira Vike-Freiberga (center), then President of Latvia, smiles as former NATO Secretary General Jaap de Hoop Scheffer (right) welcomes US President George W. Bush to the Alliance summit in Riga, November 29, 2006. Vike -Freiberga was president of the Baltic country from 1999 to 2007 and presided over its accession to NATO and the European Union. [Reuters]

Born in Latvia a few years before the start of World War II, Vaira Vike-Freiberga experienced firsthand the suffering of Soviet barbarism and its impact on the independent Baltic states. As a child refugee, she ended up in a camp for displaced people in Germany, and as a teenager she was educated in Morocco before moving to Toronto, Canada.

Her successful professional career in the field of psychology continued with her return to Latvia, where she later became the country’s first female head of state (1999-2007), leading a presidency marked by the membership of Latvia to the European Union and NATO.

Do you think your personal experience influenced your view of the war in Ukraine?

I don’t think the kind of horrors and crimes against humanity that have been committed in Ukraine since the February 24 invasion can leave anyone indifferent. And, frankly, I think it would be very narrow in anyone’s heart to only have sympathy for those who have gone through exactly the same thing as you.

When I watch these scenes, it hurts me. Maybe more than that it hurts someone who is watching from afar and hasn’t felt, for example, what it means to be kicked out of your home with just what you have in your hands and say goodbye forever to all his loved ones. There is some hope that they will, those 10 million people who have had to flee their homes, will at some point see at least some of their loved ones alive again.

How did Latvia overcome the political and ideological influence of Russia?

It took 50 years. In 1939, when Hitler entered Poland on September 1, his then partner and friend Stalin entered Poland from the other side, from the east, on September 17, because in 1938 the foreign ministers of Hitler and Stalin, Ribbentrop and Molotov, had signed an agreement on how they would cooperate. Hitler sent weapons to the Soviet Union. The Soviet Union sent plans for the gulags, which the Nazis then used to build the concentration camps. You see, they were friends and they shared Eastern Europe. Neither of them wanted to keep their word. And that’s another interesting thing, you can’t believe everything President Putin says. He kept saying, “We’re just doing maneuvers in our country” as he gathered his army along the Russian-Ukrainian border. “We are not going to invade.” And when they invaded, he said he didn’t invade. They weren’t at war…it’s a “special operation”. They were going to “liberate” the Russian speakers of Donbass. And what are they doing there? Starve them to death, like in Mariupol. They claim that the West lied to them by promising that NATO would not be enlarged. Well, then again, I mean, Mr. Putin lies, and Mr. Lavrov, from morning to night.

Is it a reunification of the former Soviet Union?

“He expected them to hold a victory parade a few days after the invasion of Ukraine. Now they are not able to do that’

I think it’s a dream. It’s a dream Mr. Putin has. Because when I first met him shortly after his election, the first thing he said to me was “what a sad thing” is that there was a border between Latvia and Russia… and that he thought it was a tragic day when the Soviet Union would collapse. And I said to him, “It was the best day of my life.” And I’m sure that sentiment is shared by many, not just Latvia’s 2 million citizens, but millions more in the former Soviet republics.

Do you think Latvia’s Russian-speaking population could serve as a Trojan horse in Putin’s expansion plans?

Well, some of them would probably be willing to because we see how they feel. These opinion polls – it’s very hard to take them at face value because people don’t always reveal what’s on their mind to a stranger who asks them something on the phone or on the street. But surely many of them, especially those who had a grandfather who fought in World War II… They had privileges. They had veterans privileges. They had special seats on the buses. They had additional pensions. They would be first in line for apartments, of which there was always a shortage.

It’s a terrible failure of the Latvian government: we didn’t have television channels going to the border. The signals were not strong enough to carry Latvian state television, and Russian speakers got into the habit of watching only Russian television. So I’m sure there are a lot of people in the villages and some small towns who, instead of watching European and Latvian news, watch Russian propaganda, and they feel that everything they are told , It’s the truth.

How effective is Russian propaganda in Latvia regarding the “denazification” of Ukraine?

Whatever he says, that’s it. Anyone who wants to be independent from Russia and who does not want to submit to Russian domination, who is therefore a nationalist, a patriot of his own country, is for them a Nazi. Putin says we can tell patriots from traitors, so in Russia, if you support him, you are a patriot. And if you don’t support him, you’re a traitor. But in another country, if they support, like the Ukrainians, the independence of their country and its choice to hope one day to be part of the European Union, one day perhaps to be part of NATO, we don’t call them patriots, they’re called Nazis.

Are Europe and NATO taking sufficient measures to protect the Baltic countries?

Everyone tried to dissuade Russia before it invaded Ukraine. Mr. Biden has had phone calls. President Macron visited him and had 16 phone calls. The German Chancellor met with Mr. Putin every month before the end of his mandate. Everyone tried to dissuade Russia. So how do you deter Russia is a mystery to me. It doesn’t look like an easy thing. I think there was a serious wake-up call from those countries that didn’t want to think that the Baltics and Poland were in danger from Russia and kept telling us that we were stuck in the past. We were considered to be prejudiced against the Russians because we saw what they could look like and we saw how they could break their promises and we could see their propaganda. Moreover, since our independence, their propaganda tries to paint all these countries, all these new countries which have obtained their independence, under the worst light possible on an international scale. Frankly, every opportunity was taken to be hostile to them, but countries like Germany had a different view of things. I worked hard to warn the Americans about it, the French, the Germans and everyone else I met at the time. Merkel’s adviser said: “Oh, but you know, now we want peace and it would be better to have good trade relations with Russia. And if we bring them into the capitalist world and they get rich, then they will automatically become democratic too. You know, completely non sequitur, completely illogical. But that was how it was.

Do you foresee a large-scale invasion in Ukraine spreading to neighboring countries?

Not at the moment because Putin could have dreamed of it, but fortunately I think his forces suffered sufficient losses in Ukraine. What we see is not a disciplined, controlled army capable of doing what President Putin had hoped for, namely, taking over Ukraine in three days, killing President Zelensky, setting up a puppet government and would then win the parade victory in kyiv. His soldiers had their parade uniforms in their backpacks. Putin expected them to hold a victory parade a few days after the invasion of Ukraine. Now they are not able to do that. And I think they will be stuck in Ukraine, God knows for how long, but at least for the foreseeable future, and they will have to recover from the losses they suffered in Ukraine. I think psychologically Putin is ready to stomp on the head of anyone he can reach. I hope that Europe will remain open to communication, open to free ideas and will work together to defend these values. But one thing I would like to point out is that it is not enough to have treaties and written concepts and agreements. I think if people don’t have that feeling in their hearts that I can feel – what a person in Greece, or fishermen in Greece feel, or fishermen in northern Sweden feel, or anyone elsewhere in Europe – to sympathize with them if there is a natural disaster of such a problem, then we must teach it to our children. Without that feeling of sympathy and empathy, it will be difficult.