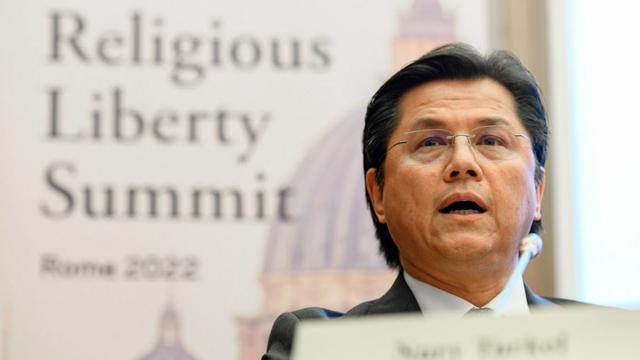 Yes, there is a genocide of the Uyghurs

In his autobiographical book, the president of USCIRF combines scholarship and personal memories to paint a horrifying scenario.

“The party apparatchik leading the meeting shouted to the assembled Uyghurs, ‘Is there a God?’ The shocked crowd paused, before replying, “No. They had to do it; other members of the neighborhood watch watched their reactions as they stood around the mast. Zumrat moved his lips without saying the words. this first time. ‘Who is your god?’ the meeting leader called out “Xi Jinping,” dutifully chanted the crowd. Later, when Zumrat returned home, she prayed for forgiveness.

Zumrat Dawut, a Uyghur businesswoman in her 30s at the time of the incident, was forced to blaspheme at 8 a.m. on a Monday morning during the weekly flag-raising ceremony which, since 2016, has taken place across Xinjiang, a region that its non-Han inhabitants call East Turkestan. The “presence was mandatory, rain or shine”. And in Urumqi, the capital of the Xinjiang Uyghur Autonomous Region (XUAR), “the temperature can drop as low as forty degrees in winter, and people standing in the snow for two hours were prohibited from wearing any form of face covering. leader that could be seen as a sign of religious devotion.

The episode and quotes (99-100) are taken from a great book, No Escape: The True Story of China’s Uyghur Genocide published by HarperCollins. Its author is also a great person. He was born in a concentration camp at the height of one of history’s deadliest human disasters and grew up to embody the “American Dream”. He is Nury Turkel, and his book tells his story and other stories of cruel persecution by the Chinese Communist Party (CCP).

Responding to timid observers and culturally conniving media, Turkel makes it clear. The CCP is carrying out genocide aimed at the physical annihilation of Uyghurs in XUAR. One of its known instruments is the terrible transformation through the education camps, where at least a million people are detained, sinicized and “deprogrammed”. But one million inmates was the starting point in 2018, when the first studies were published. Today, one million is a very conservative number. As a precaution, this is the figure still used in several documents acknowledging the Uyghur genocide, because at least this figure can be considered proven. Nevertheless, independent researchers have reason and moral certainty to triple it.

Born in a concentration camp

Ayshe, Nury Turkel’s mother, was arrested when she was 19 years old and 5 months pregnant. Businessman, she was “guilty by association”. His father, a jeweler, “maintained his old contacts” (32 years old) from the first and second republics of East Turkestan in the 1930s and 1940s, supported by the Soviet Union. When China finally broke with the USSR at the end of the 1960s, Beijing considered as enemies all those who had any ties with Moscow and its satellites. The man, like many others, fell out of favor, and so did his family. Young Ayshe was interned in the Kashgar detention camp (sinified as “Kashi”) in southern Xinjiang/East Turkestan. “The re-education camp,” writes Turkel, “was not hidden from view, like Stalin’s gulags.” It was “in downtown Kashgar, in a former Soviet-era government building, a brutalist slab of early 20th-century concrete whose windows were closed to prevent inmates from seeing more than thin cracks of light. of the sun” (33).

“One of the guards,” the book recounts, “was a Uyghur woman, a party loyalist who had taken a particular dislike to the pregnant young inmate. She beat her frequently, even kicking her on her swollen stomach. hit and called her a whore for marrying an older man […]. Mom was terrified of losing her first child. […] Then one day, just weeks before she was due to give birth, she fell down a flight of stairs, weak and dizzy with hunger. His ankle and hip were fractured. Nury was the baby carried by Ayshe. He was born in the camp in 1970, when “his mother’s hip bone was still broken, her body plastered from the waist down” (35).

The bloody Cultural Revolution, launched by Mao Zedong (1893-1976) in 1966, and only ended with the death of the tyrant in 1976, was at its peak. Both mother and son were malnourished. Ayshe suffered terribly, both physically and mentally, and never fully recovered. Turkel’s father, Ablikim, a math teacher, was sent to an agricultural labor camp, also “guilty by association”. Indeed, “he had cousins ​​who, during the Chinese re-annexation of our land, had ended up on the other side of the border, in the Soviet Union” (33).

Turkel lived in the camp for the first five months of his life. Then the mother and son were released. Nury grew up and completed his studies. China had entered the post-Mao era and the Soviet Union collapsed in 1989. end of the Chinese Communist Party. Tiananmen Square cured me of this. In 1995, at age 25, he moved to the United States as a college student and never returned. Ayshe and Ablikim stayed there. One of Turkel’s siblings, his brother Mirsalih, also stayed at home, taking care of them. Later, Abilikim, in his 60s and a diabetic with shaky hands, had to attend daily sessions at a rehabilitation center until his death. He died after the publication of “No Escape”. Ayshe is still benefiting from the nightmarish care that President Xi Jinping has in store for Uyghurs.

In due time, Turkel became an American citizen, the first Uyghur to earn a degree in American law (a doctorate in law from the American University in Washington, DC), a highly respected lawyer, the co-founder of the Uyghur Human Rights Project in 2003, then chairman of its board of directors, one of the “100 most influential people in the world” according to the September 2020 issue of “Time” magazine, commissioner of the American Commission on International Religious Freedom in May 2020 and its president in June 2022. Bitter Winter is proud to count him among his friends.

“No Escape” by Turkel is several books in one. One is a personal memoir, others tell the paradigmatic stories of several exemplary Uyghurs. In his tale “Del rigor en la ciencia” (1946), collected in his “Historia universal de la infamia” (published in 1935 and substantially revised in 1954), the Argentinian writer Jorge Luis Borges (1899-1986) invented the paradox of a fictional empire whose map is so detailed that it is as large as the mapped earth itself. A review to do justice to Turkel’s rich book would be like this map: an article as long as the revised book and as impossible as Borges’ map. But exploring its main themes would take the reader to the heart of the tragedy.

Parts 3, 4 and 5 are the heart of the book. They focus, as their respective titles tell us, on “The War on Uyghur Women,” “How to Suppress a Culture,” and “The Reimagining of Genocide.” Their topics are of course intertwined and even intertwined, as they address the book’s key points.

The war against ethnicities, cultures and religious groups, perceived by the CCP as dangerous enemies, began the day the CCP took power in 1949. But the Uyghur genocide, in its current paroxysmal form, has become the official standard policy with Zhu Hailun as CCP. Secretary of the XUAR committee from 2009 to 2016 and his successor, Chen Quanguo, who had the same role and demonstrated the same ferocity in the Tibet Autonomous Region from 2011 to 2016.

One story may be enough to illustrate the CCP’s war on Uyghur culture. Linguist and poet Abduweli Ayup, a famous intellectual in his native country and abroad, was arrested in August 2013 while trying to establish schools for the teaching and practice of the Uyghur language. Released in November 2014, “[a]While being interrogated at the police station, Turkel notes, strapped into a tiger chair, he heard a strange noise behind him but couldn’t see what was causing it. Then he felt a searing shock go through his body. The police used an electric baton, burning his chest. Writing for PEN International, Ayup alluded to ‘the sexual abuse he suffered by twenty prison guards who ‘forced him’ to undress in front of them’ (210).

As for the hatred against Uighur women, it has become almost an exact political science, savagely and sadistically targeting women as a strategic link between generations of Uighurs. Uyghur women have been and are harassed and offended, humiliated and raped, mocked and offended. Rape is ordinary and not even hidden, as it happens in the CCP’s program that sends “extremism” monitoring agents to live with Uyghur families and sleep with their wives. Among others, Bitter Winter covered this horror and its aftermath. As Turkel reports, “Darren Byler, a sociocultural anthropologist at the University of Colorado who has studied Uyghur dispossession closely, estimated in 2018 that around one million ‘older brothers and sisters’ were sent to live in homes Uighurs” (127). The arrival of these false “relatives” often heralds the fate reserved for Uyghur women.

In the late 1990s, party fanatic Zhu Hailun “always asked two things when he arrived in a Uyghur community: the first was what crops the farmers were growing and the second was how many women were pregnant or had an IUD contraceptive device. implanted.” (224). The Uyghur birth rate was and is an obsession for the CCP; and the CCP’s measures against Uyghur women are, in Turkel’s own words, “the seed of genocide.” “Forced control population” is meant to purify “primitive Uyghur ‘barbarians’ whose minds must be exposed to China’s glorious language and culture”, in a scenario of “anti-religious fervor” and “deep paranoia about separatism” (224–25).

Based on statistics developed by the German researcher Adrian Zenz, Senior Researcher and Director of Chinese Studies at the Victims of Communism Memorial FoundationWashington DC, Turkel calculates that “the rate of natural population growth in Kashgar and Hotan”, two predominantly Uyghur regions in Xinjiang/East Turkestan, “dropped by 84% between 2015 and 2018”.

All of this explains the title of Turkel’s book: Under CCP rule, the Uyghurs are doomed to extinction. Worried that “the Biden administration is dropping the terms ‘genocide’ and ‘crimes against humanity’ in official statements” (332), Turkel’s diagnosis is clear. What we witness in XUAR is the systematic attempt to wipe out an entire people by nullifying their identity and preventing their future in a way reminiscent of Nazi policy towards the Jews. “Instead of outright extermination or expulsion, writes Turkel, the Chinese Communist Party has devised its own multifaceted plan to eradicate and exploit the Uyghurs in ways that are both disturbing and shocking” (233 ).