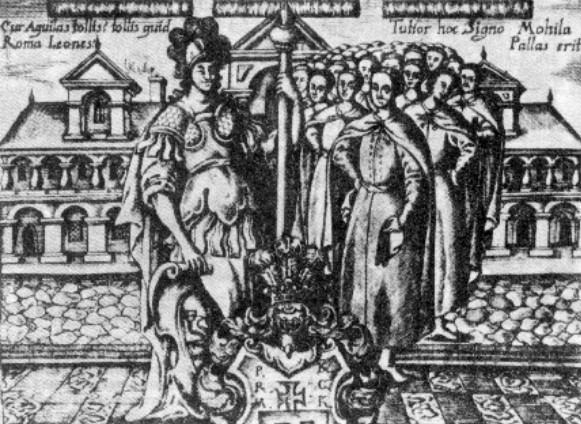 “With the Slavic Language One Cannot Be a Scholar”: A Revised Assessment of Liberal Arts Culture in Eastern Slavic Lands

The Jordan Center stands with all the people of Ukraine, Russia and the rest of the world who oppose the Russian invasion of Ukraine. See our statement here.

Above: Ivan Shchyrsky, “Pupils of the Kyivan Mohyla Academy” (1701). Source

Reut Ullman is a doctoral candidate in history at Columbia University. His research focuses on the intersection of philosophy, science and politics in Elizabethan Russia.

Reflecting on the absence of a learned culture in Orthodox Russia until 1577, the Polish hagiographer Piotr Skarga (1536-1612) concludes with bite:

with the Slavic language one cannot be learned. He has neither grammar nor rhetoric, and we can’t give him any. Because of this language, the Orthodox do not have schools beyond elementary that teach reading and writing. Hence their general ignorance and confusion.

Although Skarga recaps a cliché fashionable among his Polish contemporaries, there was a grain of truth in his complaint. The first institution of higher education offering a liberal arts program for Orthodox Slavs was founded only in 1637 in Kyiv, then under the control of the Polish-Lithuanian Commonwealth. Within a decade, however, the Kyiv-Mohyla Academy acquired a reputation for scientific rigor that caught the ear of the Russian Tsar Alexei Mikhailovich (1629-1676), who began inviting graduates of the Academy to fill the bureaucratic ranks of the Muscovite kingdom. In 1685, an institution in a similar style was founded on Moscow soil.

Both academies modeled a traditional Jesuit curriculum modified for Orthodox Christian consumption and administered by Orthodox clerics. In the 18th century, dozens of such institutions dotted the Russian Empire. In the mid-19th century, according to religious scholars Scott Kenworthy and Alexander Agadjanian, the Russian clerical estate was among the best educated estates in the country.

If the early liberal arts academies in Eastern Slavic countries quickly gained a reputation for academic excellence and were endorsed by both church and state authorities, why was their introduction it been blocked until the 17th century?

Scholars have offered a multitude of causes for the “intellectual silence” that enveloped Rus’ lands. Past explanations have included the Great Schism of 1054, which separated Eastern Orthodox from Latin intellectual networks; the balkanization of the Rus’ lands, which made each principality too small to accommodate a secular culture, to the remoteness of the Rus’ lands from the intellectual centers of Europe; the 300-year-old Mongol occupation, which devastated libraries and monasteries; and finally, the continued intolerance of “foreign” learning by the Russian Orthodox Church.

Each analysis has some merit, but an understudied area is the exclusion of the theological corpus of St. Augustine of Hippo from the Russian theological canon. Augustinian thought had helped define postlapsarian epistemology and crystallize Christian doctrine on sin, grace, and church-state relations in the Latin West. Among the less cited, but no less critical, achievements of Augustine was the promotion of the liberal arts.

In the 4th century text From Ordine, Augustine reflected extensively on the study of the liberal arts, as well as their application to the pursuit of the highest forms of intelligible reality: knowledge of the soul and of God. He believed that the liberal arts were powerful tools for disciplining the mind against the chimeras of sense perception, because “[man] needs the great habit of withdrawing from the senses and collecting his soul within himself and sticking to it. Scholars of the liberal arts, Augustine suggested, can “reach such a stage” that they are able to “heal through liberal disciplines certain wounds of opinion which the course of daily life inflicts.” (1.1.3)

In the same dialogue, Augustine also argued that it was possible to achieve earthly happiness primarily through the intellect, meaning it would only be available to a select few educated in the liberal arts:

And lest anyone imagine that we have embraced something too broad, I say it more clearly and more briefly: no one should aspire to knowledge of these things. [i.e., the divine order] without this double science, so to speak, of good discussion and the power of numbers…

A double question belongs to this education: one on the soul, the other on God. The first ensures that we know each other; the other, our origin. The first is kinder to us; the latter, more valuable. The first makes us worthy of a happy life; the latter makes us happy. (2.18.47)

In his later writings, Augustine would soften his views on the earthly fate of the uneducated but devoutly faithful. Such modifications, however, did not move the intellectual heirs of its tradition, from Thomas Aquinas to Gottfried Leibniz.

Unlike the Augustinian iteration of the Latin doctrine, Greek Orthodoxy and especially Russian Orthodoxy emphasized material, experiential, and visceral worship. Through such encounters, believers could attain an intimate knowledge of God, experience the divine, and become deified in the process.

The emphasis on ritual body worship was apparent in the very etymology of the Greek term “Orthodox” and its Russian equivalent, pravoslavia, as well as in the orthodox approach to theology. The term “Orthodox” comes from the Greek orthos for correct and doxa for the glory. In the same way, pravoslavia is a compound of two words, forecast for correct and slave for the glory. The Orthodox faith is therefore the correct way to glorify God, with the faith’s emphasis on worship rather than rational apprehension of the divine.

Thus, Eastern Orthodox theologians rarely engaged in scholarly attempts to rationalize Christian doctrine. Indeed, according to Kenworthy and Agadjanian, such efforts would have represented “a reduction of theology to a rational and philosophical system.” Instead, Orthodox theologians “believe[d] that the mystery of God ultimately transcends[ed] human reason and the systems it constructs[ed].” These sentiments echo in the writings of Russian theologian Pavel Florensky, who argued that to encounter the divine was to physically immerse oneself in its pursuit. “Orthodoxy,” Florensky wrote, “is demonstrated, not proven. This is why there is only one way to understand Orthodoxy: by direct experience of Orthodoxy.

Thus, while for Augustine the path to salvation or earthly happiness was rational, for the Greek Church fathers it was ontological. It is also for this reason that the study of nature in the Latin West embodied a higher level of knowledge than in the lands of the Rus’, for to discover the eternal laws of the universe of God was equivalent to encountering and glorifying the divine.

Because the way of salvation in the Orthodox Rite was performative rather than intellectual, there was no impetus to introduce the study of the liberal arts to Eastern Slavic lands. The hasty foundation of the Kyiv-Mohyla Academy was stimulated by existential circumstances. The Orthodox denomination had suffered significant losses in traditionally Orthodox territories with the rise of the Uniate Church in 1596 under King Sigismund III of Poland (1566-1632). A militant Roman Catholic, Sigismund sought to bring all Orthodox believers in his kingdom into the Catholic fold. To ward off the Catholic assault on Orthodoxy, Metropolitan of Kyiv Pyotr Mohyla founded the Academy on the Jesuit scholastic model to arm Orthodox theologians with weapons of rhetoric, logic, and dialectical method of analysis.

Likewise, the Slavo-Greek-Latin Academy in Moscow (1685) was founded by political and administrative necessity. The reforms of Patriarch Nikon had created a schism within the hierarchy of the Church and the laity. To bridge a potentially explosive social divide, the Russian Orthodox Church needed to train a new cadre of clerics supportive of the new reforms. Meanwhile, the Tsar’s bureaucracy regularly lacked competent bureaucrats. The founding of the Moscow Academy under the aegis of the Leichoudes brothers provided a timely solution to both problems.

The Russian Orthodox Church administered the intellectual culture of the Muscovite Kingdom in the early modern period. The lack of theological respect for the study of the liberal arts, coupled with the undisputed hegemony of the Orthodox rite in the Eastern Slavic lands for most of the modern period, made the study of the liberal arts superfluous until the 17th century. century.

The international area at the fair offers curiosities, flavors from all over the world | News, Sports, Jobs

Aiming to strike a balance between secured and unsecured loans: CEO of Ujjivan SFB