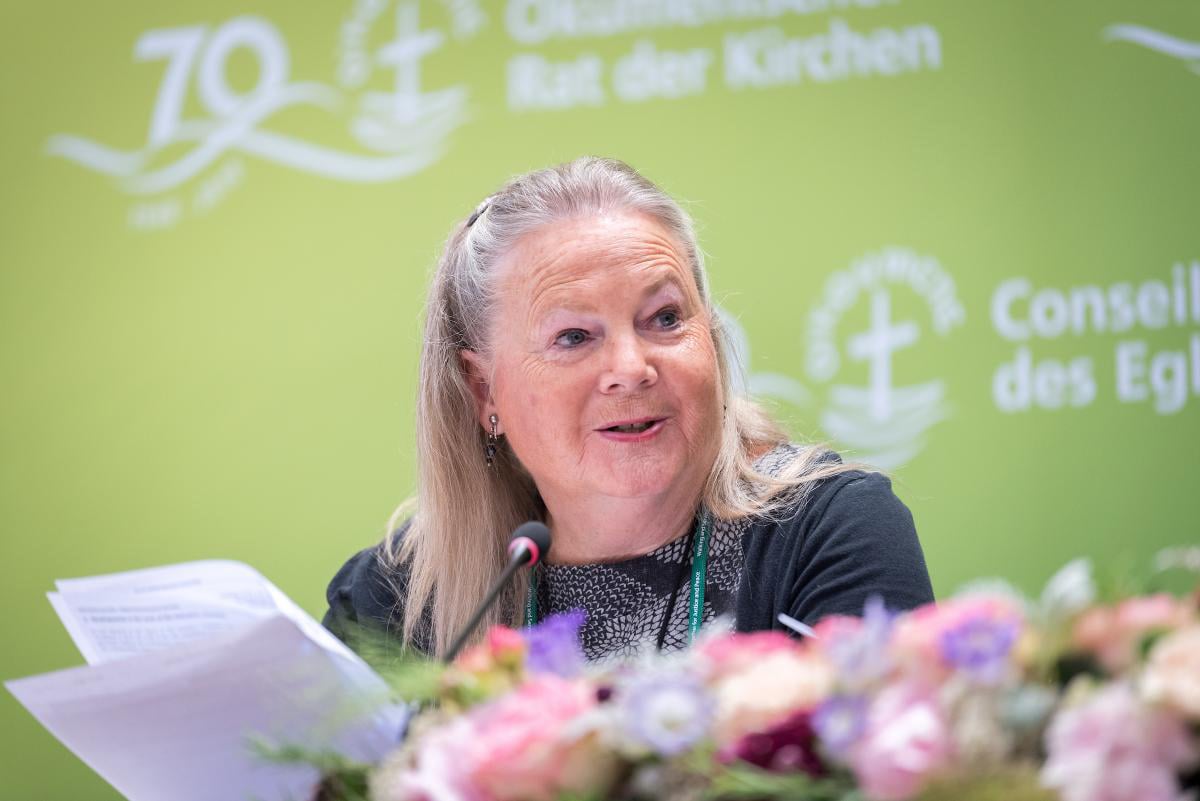 (RNS) — How should the world’s largest collection of Christian traditions respond to Russia’s invasion of Ukraine?

This is the question posed to the World Council of Churches, the inter-church grouping of Christian denominations around the world formed in the aftermath of the Second World War. Long considered the pinnacle of the ecumenical movement, the nearly 75-year-old group was recently rocked by a debate over whether to suspend membership of the Russian Orthodox Church after ROC leader Patriarch Kirill of Moscow, expressed its support for the war and arguably laid the spiritual groundwork for Russian President Vladimir Putin’s invasion.

To better understand this global discussion, Religion News Service spoke with Bishop Mary Ann Swenson, a United Methodist in the United States who serves on the WCC’s executive committee and works as vice-chair of the group’s central committee – the body that could decide whether or not to expel the ROC when it meets in June.

“It’s tricky with the Moscow Patriarchate. We are going to do our best to be about reconciliation and unity,” Swenson said. “These next few months will be really crucial,” as the WCC executive committee and then the central committee itself prepare to meet.

There are about 352 member churches in the World Council of Churches and 150 members in the Central Committee, which has at least 25 percent Orthodox membership, according to Swenson.

“The Orthodox community is very, very important in the World Council of Churches,” Swenson said.

This interview has been edited for clarity and length.

There was a debate about the expulsion of the Russian Orthodox Church from the World Council of Churches. The effort is mostly rooted in Patriarch Kirill’s frustration over his blessing – literally or figuratively – for the Russian invasion of Ukraine. What do you think of these calls to expel the ROC?

Fr (Ioan) Sauca, in his role as Acting General Secretary (of the WCC), wrote to His Holiness Kirill, saying that the whole world was looking for a sign of hope, a peaceful solution. He encouraged His Holiness to speak to Putin and end the violence. He said at that time that letters were coming to him from all different parts of the world – from church leaders and faithful voters – asking the World Council of Churches to approach His Holiness, to mediate, help stop the war and all the great suffering that was happening.

Once (the WCC) suspended a church — the Dutch Reformed Church, because it was the apartheid era. But on all other occasions – and there have been others, with different wars, different countries, divisions and issues of oppression, very difficult times historically – the World Council of Churches has tried to continue the dialogue. He tried to avoid expelling anyone and to really stay in dialogue with very different people.

But the current situation is really about the Orthodox. What is happening right now is so painful for so many Orthodox faithful. However, we remain truly committed to reconciliation and to the theme of our (next) assembly: “The love of Christ moves the world towards reconciliation and unity”. Currently the Russian Orthodox Church is a Member Church and the Ukrainian Orthodox Church (which split from the ROC in 2019) is applying to become a new Member Church – so we are starting to work with this membership. They are all invited to come to the meeting.

Russian Orthodox Patriarch Cyril at the Cathedral of Christ the Savior in Moscow on Jan. 7, 2021. (AP Photo/Alexander Zemlianichenko)

One of our first General Secretaries was Willem Adolph Visser ‘t Hooft – our room is named after him. He brought, in his time, churches from the Soviet bloc to the World Council of Churches, despite their support for communist ideology and totalitarian regimes. These churches have learned and gained so much through the international fellowship of the World Council of Churches.

It is therefore a historical justification.

Can you tell more about the WCC’s work on this issue?

In March, a joint delegation from the World Council of Churches and Act Alliance traveled to Hungary, Ukraine and Romania to accompany first responders attempting to assist humanitarian efforts. Then the first lady of Ukraine, Olena Zelenska, wrote to our general secretary and asked the World Council of Churches to try to mediate different agencies helping with humanitarian efforts. We went on to convene a roundtable, bringing together leaders from neighboring countries, and trying to bring in leaders from Ukraine and Russia to try to discuss a way forward in peace. But as you know, it hasn’t happened yet.

All this to say that we are heading for an in-person Central Committee meeting, and people will have all kinds of opinions from all kinds of countries around the world.

Analysts worry that Kirill, in particular, has used the World Council of Churches over the past 10 years to legitimize some of the Russian Orthodox Church’s soft power efforts, particularly in Eastern Europe. Is there a concern about this dynamic?

We are committed to the restoration of peace, but you and I know that peace without justice is not peace. We must uphold justice in our peacemaking efforts.

The World Council of Churches is running a Thursdays in Black campaign, and we all wear black on Thursdays to raise awareness of the need to end violence and rape against women and to stand in solidarity with women who have experienced violence . This extends to what we have to do now with the Moscow Patriarchate.

There are Russian Orthodox priests and leaders who tried to oppose what His Holiness said, to stand up in the name of peace and to denounce what the Patriarch of Moscow is doing to support Putin and his war.

Bishop Mary Ann Swenson, one of the vice-presidents of the Central Committee of the World Council of Churches. Photo by Albin Hillert/COE

Looking to 2022, what do you see as the goal of the World Council of Churches at this point in world history?

The World Council of Churches was formed to be a fellowship of churches, to say that the Christian community in the world could work to promote peace. When I came to the assembly in Korea in 2013, the theme that year was “God of life, lead us to justice and peace”. So when we formed the Central Committee at our first meeting in 2014, we formed it to continue, over the years to come, to walk together in a pilgrimage of justice and peace. This, over the past eight years, has really been a priority for the World Council of Churches.

One of the things that happened in this pilgrimage of justice and peace is that as we went to different places in the world, we went to celebrate the gifts from wherever we were, to visit the wounds and to listen to the wounded . Then we work as advocates for greater Christian discipleship so that we can truly grow as disciples for the transformation of the world. This is really the purpose of the work.

In preparing for this next assembly, we are really focusing on love – the general secretary, he gave an incredible presentation on love and the fellowship of the churches. It has become clear that the theme of this upcoming assembly is “The Love of Christ Moves the World to Reconciliation and Unity”. I believe in the world at this time as we deal with what is happening with Russia’s invasion of Ukraine, (there is a) need for us across the world as a Christian community to stand by people who are suffering so that we can move the world to reconciliation and unity.