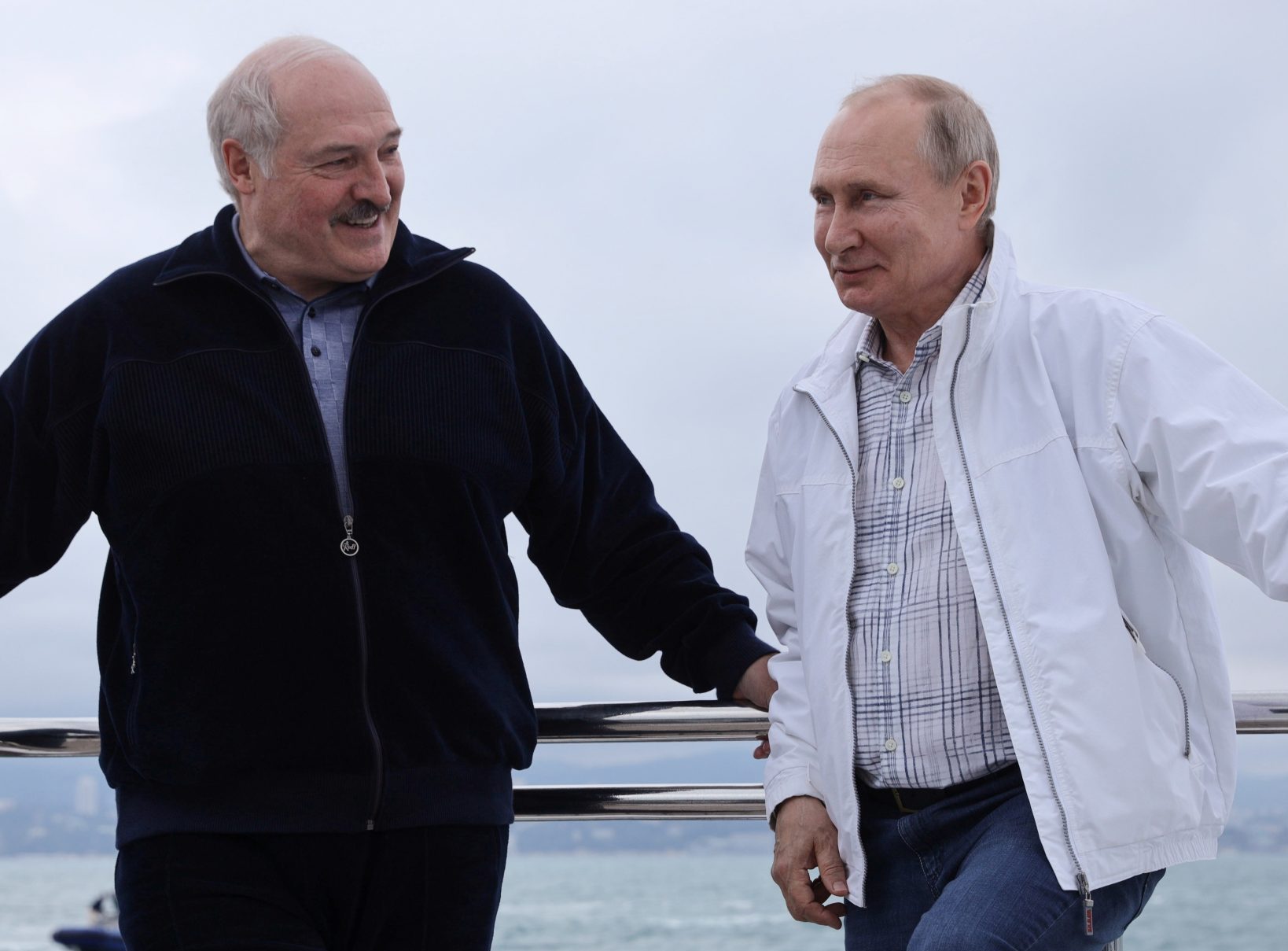 Belarusian dictator Alyaksandr Lukashenka in Sochi with his Russian counterpart Vladimir Putin on May 29. (Sputnik / Sergei Ilyin / Kremlin via REUTERS)

The current crisis in Belarus was barely mentioned at last week’s much-anticipated summit in Geneva between US President Joe Biden and his Russian counterpart Vladimir Putin. While Belarus has reportedly been on the US leader’s agenda ahead of the talks, it appears the Russian side has no interest in discussing the issue.

This apparent reluctance reflects Putin’s view of Belarus as belonging exclusively to the Kremlin’s sphere of interest. Nonetheless, there had been plenty of speculation ahead of the June 16 summit that the Russian leader might in fact be willing to sacrifice Lukashenka in return for concessions from the West.

According to this scenario, Putin would accept the impeachment of Lukashenka, but would seek to install a replacement close to the Kremlin in the ranks of the Belarusian opposition. This maneuver would keep Minsk firmly in Russian orbit, while responding to Western demands for normalization of the situation in Belarus, including the release of political prisoners and the scheduling of new presidential elections.

It’s not hard to see why a bet of this nature might appeal to Putin. This would allow him to show an apparent goodwill on the world stage and to play the flattering role of statesman mediator. This would serve to divert international attention from aggressive Russian actions towards positive change in Belarus.

Technically speaking, orchestrating a favorable transfer of power to Minsk would present relatively few problems for Russia. Moscow already enjoys considerable influence over all aspects of the Belarusian state apparatus and in recent months has taken steps to establish Kremlin-controlled political parties in Belarus that could help facilitate a proper transition.

Meanwhile, Lukashenka might expect to receive the kind of special Russian retirement package reserved for longtime Kremlin devotees such as exiled Ukrainian president-in-exile Viktor Yanukovych. Of course, there would be no question of international justice or embarrassing trials in The Hague.

While this scenario has a lot to recommend, Putin seems to have moved in the opposite direction. Instead of using the Belarusian crisis to ease tensions with the West, he chose to double his support for Lukashenka. This uncompromising stance is perhaps most evident in Putin’s vigorous defense against the recent Lukashenka act of air piracy.

The Minsk strongman’s decision to force an EU airliner through Belarusian airspace in order to arrest a dissident Belarusian journalist sparked international outrage and sparked a new wave of sanctions. Undeterred, Putin publicly supported Lukashenka’s actions and even went so far as to temporarily block a number of EU airlines from Russian airspace in apparent retaliation for measures imposed against Minsk.

Receive updates on events, news and publications about Belarus from the Atlantic Council.

In the final analysis, Putin probably decided that removing Lukashenka was just too risky. The Russian leader remains haunted by the Soviet collapse and fears a repeat of the pro-democracy uprisings that swept through central Europe in the late 1980s and triggered the fall of the USSR. This explains Putin’s decision in 2014 to invade Ukraine following the country’s Euromaidan revolution, and also forms the basis of his opposition to ongoing anti-regime protests in Belarus.

Putin recognizes that the collapse of the neighboring Lukashenka regime would have direct and potentially disastrous consequences for his own future in Russia. This could serve as an inspiration to the Russian opposition forces, who would inevitably begin to question whether they could replicate the success of the protest movement in Belarus and overthrow their own dictator. With the Russian Duma elections slated for September, Putin is not in the mood for such challenges.

The survival of his own regime is not the only strategic interest that shapes Putin’s approach to Belarus. The Kremlin must maintain its dominant position over the country in order to secure Russia’s western borders and expand the encirclement of Ukraine. Russia’s growing military presence in Belarus also allows Moscow to threaten neighboring NATO member states Poland, Lithuania and Latvia.

From a Russian perspective, one of the main drawbacks to keeping Lukashenka in power is the damage it has caused to the complex architecture of the Minsk peace process. For nearly seven years, ongoing negotiations in the Belarusian capital have helped Russia maintain the fiction of observer status in the Ukrainian conflict. However, Lukashenka’s increasingly obvious dependence on Moscow has led Ukraine to declare in recent months that Minsk is no longer a suitably neutral place for peace talks.

Prior to the outbreak of the current crisis in Belarus last summer, Lukashenka had done a lot to cultivate the image of an internationally acceptable host for the peace process in Ukraine. He maintained friendly relations with Ukraine and categorically refused to recognize the Russian annexation of Crimea.

Since August 2020, this position has changed considerably, with Lukashenka accusing Ukraine of supporting a “color revolution” in Belarus. More recently, he allowed representatives from Russian-occupied eastern Ukraine to interview Belarusian dissident journalist Raman Pratasevich in Minsk.

The last indication of Lukashenka’s eagerness to please the Kremlin was the announcement in early June of a new national holiday linked to the Nazi-Soviet pact and the outbreak of World War II. From this year, Belarus will mark National Unity Day on September 17, the date in 1939 when the Soviet Union joined Hitler’s Germany in the invasion of Poland. In recent years, Putin has vehemently defended Soviet cooperation with Nazi Germany and angrily rejected claims that the USSR was jointly responsible for the outbreak of World War II.

This year’s National Unity Day celebrations are expected to take place during the Zapad 2021 joint military exercises, which will see large numbers of Russian and Belarusian troops deployed near the border with Poland. Is it just the idea of â€‹â€‹Putin and Lukashenka geopolitical trolling, or is something more worrying planned?

Whatever they have in mind, the two leaders seem to understand that their destinies are now inextricably linked. Lukashenka’s dependence on Russia has been clear for some time, but Putin is in many ways also hostage to his Belarusian counterpart. Europe’s last two dictators know that if one were to fall, the other would find itself in a perilous position. They might not necessarily like him, but Putin and Lukashenka are now locked into an authoritarian alliance.

Jan Pieklo is an author, expert on Eastern European and Western Balkan affairs and former Polish Ambassador to Ukraine.

the Eurasia Center mission is to strengthen transatlantic cooperation by promoting stability, democratic values â€‹â€‹and prosperity in Eurasia, from Eastern Europe and Turkey in the West to the Caucasus, Russia and Central Asia to ballast.