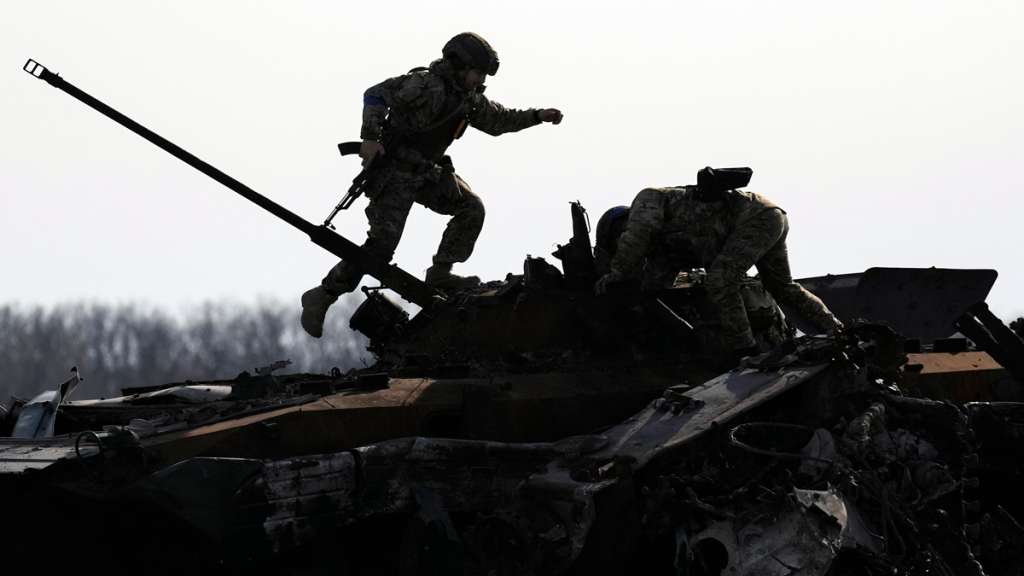 Why isn’t the UN doing more to stop what is happening in Ukraine? – Boston News, Weather, Sports

(CNN) — Watching the brutal footage of Russia’s invasion of Ukraine has many around the world wondering why isn’t the United Nations doing more to stop the war? Among them, Ukrainian President Volodymyr Zelensky himself.

“You must act immediately,” Zelensky implored the UN Security Council during a live broadcast April 6 speech to its members.

He pleaded with them to do something to stop the war in his country, directly criticizing the inaction of the Security Council. And he called the elephant in the room: Russia, one of the Council’s five permanent members, whose status gives it the ability to veto any action it disagrees with.

“We are dealing with a state that turns the right of veto in the UN Security Council into a right to die,” Zelensky said.

It was a stark message urging the Council to reform, and if that doesn’t work, he said, “the next option would be to disband you altogether.” And I know you can admit that if there’s nothing you can do but talk.

Many people who have watched the UN for years agree that the UN Security Council seems helpless right now, with the world watching. The Security Council was designed in a different era, after World War II, with a membership and veto system that ultimately limited its effectiveness in managing that global conflict. Other parts of the UN have responded more effectively to the humanitarian and refugee crises that the war has created.

Former US ambassador to the UN John Bolton, who served under Republican presidents including George W. Bush and Donald Trump, agreed with Zelensky’s assessment. “I thought he was absolutely right,” Bolton told CNN chief political analyst Gloria Borger. “And I thought there was one more convert to understand what is wrong with the United Nations. Its political institutions are fundamentally broken.

Bolton has never been a big fan of the UN. He is famous for having said, in 1994, that if the UN Secretariat building in New York “dropped 10 floors, it wouldn’t make a difference”.

There have been many moments of deadlock before in the Security Council when the major powers were at odds. But this moment has attracted outsized attention globally.

“This is the biggest crisis to hit the UN since the end of the Cold War,” said Richard Gowan, director of the International Crisis Group at the UN. “It is possible that this marks the beginning of a sort of fundamental rift between the great powers that will make UN diplomacy much more difficult in the future.”

The system was designed this way: to prevent global conflict but also to reward the main victors of World War II, according to Gowan.

“It was Franklin Roosevelt who wanted to create an organization that would control the world after the defeat of Nazi Germany,” Gowan said. “But the only way for him to get Russia and other powers to accept this deal was if they had the ability to block any action against themselves.”

The late leader of the Soviet Union Joseph Stalin himself insisted on this power as a way for his state to protect itself.

Today, the Security Council has 15 members, but the five permanent members have remained the same, with Russia occupying the seat of the former Soviet Union and China that of the Republic of China. And the veto has not changed either.

“What we see is that when there’s a fundamental disagreement between the permanent members, nothing happens,” Bolton said.

The UN charter also makes it impossible to do another thing Zelensky suggested: kick Russia out of the Security Council, because the country can veto that as well.

Over the years, countries and diplomats have suggested reforming the council by adding more permanent members to better reflect contemporary geopolitical reality, or even trying to remove the right of veto. But no country wants to dilute its power.

“I’m being honest with you, I don’t think anyone wants to give up their veto,” former US ambassador to the UN Bill Richardson, who served under former Democratic President Bill Clinton, told Borger.

Richardson points out that the United States has used the veto to protect its own interests – and may need to do so again.

“It helped us during the war in Iraq. It helped us in Bosnia. It helps us in conflicts in Africa,” he said. “So no permanent member country wants to give up their right of veto. And I would be against the United States giving up its veto now, just so that we could act on another issue.

In theory, the Security Council “could impose even more sweeping global economic sanctions on Moscow than what we have already seen. It could technically authorize military action to repel Russian forces in Ukraine,” according to Gowan.

But with Russia and probably China ready to veto any action against the war, the Security Council is deadlocked.

A massive global organization
The UN is larger than the Security Council, and other parts of the body – which has six main organs – have been more active since Russia invaded Ukraine.

“The UN is there to publicize the tragedies of the world. Like the refugee crisis in Ukraine, like the potential war crimes, like so many other human costs that are taking place,” Richardson said. “At the same time, the UN provides food. The UN provides assistance to refugees.

The United Nations General Assembly has twice condemned Russia for the war in Ukraine; these resolutions are not binding but have symbolic weight. Russia was also suspended from the Human Rights Council, which requires a two-thirds majority vote.

But Bolton said the calculations behind the vote show Russia has strong support around the world; the result of the vote was 93 for, 24 against and 58 abstentions. The remaining 18 Member States have not been included in this result.

“So here’s the real headline… A majority of UN members did not vote to expel Russia,” he told Borger.

Russian President Vladimir Putin probably expected these kinds of condemnations, but what really interests him is the status and power that being on the Security Council gives Russia.

“After the collapse of the Soviet Union, Moscow clung to its seat on the Security Council essentially as proof that it was still a great power,” said Gowan of the International Crisis Group. “Now in the real world…Russia is not that important. China and the United States are the dominant players, but in the Security Council the Russians are equal to the United States. And they are very, very proud to have this status.

And Richardson knows firsthand from his time at the UN in the 1990s that Russia knows how to game the system.

“When I became UN Ambassador to the United States, Lavrov, Minister of Foreign Affairs, had already been there for 10 years. So he was very skilled,” Richardson said. “He knew how to maneuver in the Security Council. He was very fearsome. And so we have Russia right now, which is very familiar with UN operations, so that’s an advantage they have.

Bolton sees no way to change the system.

“Unless the unicorns break free and gentleness and light prevail, where there is disagreement among the (permanent) five, there will be no action,” he said. .

Join our newsletter for the latest news straight to your inbox