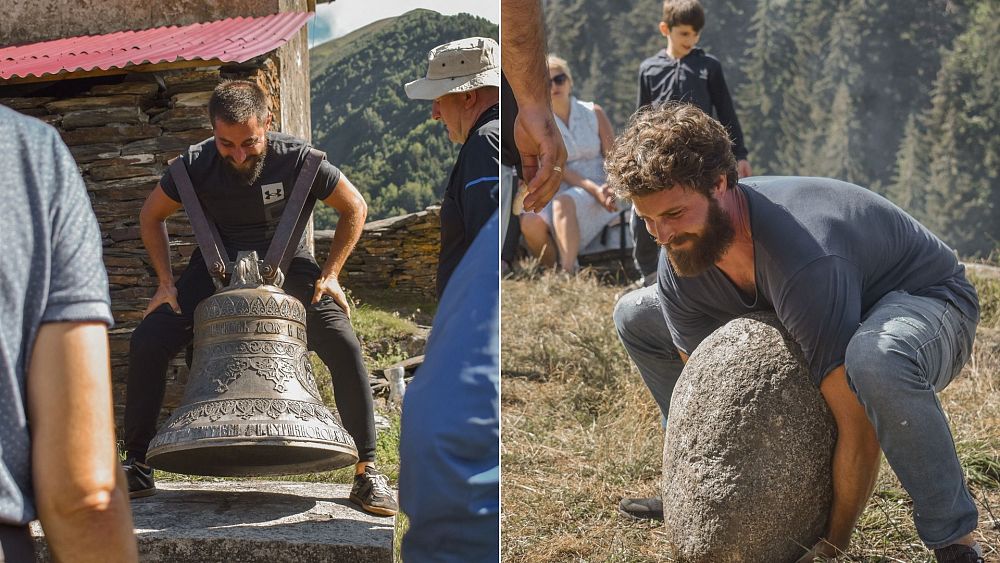 What is Kvirikoba? The ancient folklore and rock throwing festival of rural Georgia

Few places are as wild as Georgia’s Svaneti region, where old and new gods still play a huge role in local life.

Connected by a series of remote villages in the heart of the Caucasus Mountains, the Georgian highlands region of Svaneti is steeped in folklore, ancient history and breathtaking scenery like nowhere else in the country. This has led to a distinct identity shaped by isolation, much of which is still preserved in amber with hundreds of khoshkebi (medieval stone towers) still standing, an archaic local language and a reputation for being warriors. the fiercest of the nation.

The isolation of the area also means that religious folk traditions still prevail here with sacrificial bones adorning churches and ancient rites still widely practiced. It is rarely as obvious as the annual Kvirikoba festival.

A festival full of folklore

Every year, precisely 100 days after Easter, groups of Orthodox worshipers from Svaneti and beyond wake up at dawn to make the steep trek to St. Kvirike, an 11th-century hilltop church. in the wild nature of the municipality of Mestia in Svaneti.

Among the crowds you’ll find over-enthusiastic children jumping along exposed roots, determined elderly women trudging along, families with locked hands, and many sturdy, stern-faced men pulling goats with makeshift bridles in rope around the horns.

Their vertical pilgrimage marks Kvirikoba, a religious holiday dedicated to the memory of Ivlite and Kvirike, a Christian mother and son who were tortured, martyred and then canonized for their steadfast beliefs. And it’s at St. Kvirike Church in the small village of Kala that the party is most revered – and not just because of its 910-year-old frescoes and superb hilltop location.

St. Kvirike Church, also known as Lagurka (the holy place) in the local Svan, is where you’ll find the more than 1,000-year-old ornate Shaliani icon, a relic of Christ considered by many as having “great miraculous power and healing abilities.” . “Spending most of his time behind glass in the famous ethnographic museum of Mestia, once a year he is loaned to St. Kvirike Church for Kvirikoba.

And while Kvirikoba is undoubtedly a Christian holiday in today’s world, Manana Khizanishvili, curator of the history and ethnography collections at the Georgian National Museum in Tbilisi, says that â€œits roots go back much further than those of Kvirike and Ivlite â€.

In ancient Svan times, this day was used for fertility and bountiful harvest rituals for the Svan god Kviria. “It is very likely that the modern holiday is an adaptation of the pagan Svan fertility ritual,” the museum explains.

Today’s celebrations are proof that old ways die hard – over a thousand years after a reluctant conversion to Christianity, the Svans still practice sacrificial rites and maintain a strong belief in pre-Christian superstitions.

At the top, the pilgrims move towards the facade of the church where the ritual of the day begins. Thin golden twigs of beeswax and string are offered to make wishes by lighting them up and sticking them to the stone wall. Meanwhile, devotees flock to secure divine favor with offerings, which will hopefully result in the birth of a son into their family.

At the head of it all is Elguja Khardziani, an intense man who recites prayers and blessings for every believer with an offering. Some with cash tithes, jewelry, religious icons, and other valuables – but a crowd favorite by far is the lemziri – a saucer-sized ritual bread baked by abundance in sight of the special day.

However, the most important and notable offerings are the cattle that local families raised specifically for the sacred occasion.

Led erratically by the horns, countless goats are led to the makeshift pulpit to be blessed before being sacrificed as an offering to the gods, old and new, later that evening.

Healing from a rare disease

For Nino Andriasova, a Tbilisian and fervent believer in the power of Kvirikoba, this is the time of year that she expects the most. She explains that “every year in Kvirikoba I am reborn” and attributes her health to the miracle of Kvirikoba saying that a few years ago a rare disease brought her to the brink of death and left her less than 5% chances of survival. .

â€œThey were preparing my mother for the death of her daughter. I prayed for ten days in a row. I never stopped. I asked God – I promised God – that if he let me live, I would ascend St. Kvirike Church and make a sacrifice in his honor. After a month and a half in the hospital, I was released. I kept my promise and in Kvirikoba I made a sacrifice on the hill of this church for God.

â€œThis church and this feast are miraculous and all powerful. I believe it deep in my heart, â€she said.

Another festival-goer, Irakli Gurchiani from Etseri, a small village near the Enguri Dam, declares that â€œeven after 20 consecutive years of worship and celebration in Kvirikoba, I am still immensely fascinated and moved by the holiness of this day. “.

For Nino, Irakli and so many others, Kvirikoba is a day of mysterious divine intervention.

Rather than a strict order of events, the afternoon consists of various traditions taking place simultaneously. On the other side of the church, there is a huge bell where spectators huddle together. The bell isn’t just for show, either. This megalithic chime weighing nearly 300 pounds serves as a contest of strength, with the winning prize being a lamb or goat of the winner’s choice.

Men of all shapes and sizes, from all corners of Svaneti and beyond, rise to the challenge, most resulting in a beet-red face, shaking knees and little bell movement.

Along with the bell are scattered massive rocks used for sajildao qvis atseva, or boulder throwing. Competitors must lug the incredibly large and heavy boulder over their shoulders and throw it behind their backs. Think of it as a form of shot put.

Winners are rare and, of course, get the ultimate bragging rights. For Mose, 17, from the village of Sakdari in Lentekhi of Lower Svaneti, carrying on the ancient tradition of sajildao qvis atseva, is his â€œgreatest honorâ€.

He continues, “It may sound like a simple game, but it is a continuation of our ancestors and a way to prove our strength to God and to our village.” Mose describes his strength as a pillar of what it means to be Svan and how it contributes to the history of the region.

â€œWe are resilient. We are fearless. We are mountain people who live according to the laws of nature, who understand the wild nature of our homeland. This is why we have never been conquered by any of Georgia’s enemies.

It was around this time that a huge feast was generally served to everyone. Manana explains that traditionally, a special type of bull known as uiskhi, is slaughtered at the start of the first prayer and liturgy before being cooked in a huge cauldron throughout the celebration. When served, it is accompanied by traditional folk songs and dances native to the region.

This year however, Kvirikoba looks a little different.

With so few people present due to the pandemic and recent flooding which has made the village inaccessible for most, there are not enough people to satisfy a traditional feast. However, a lot of lemziri are generously handed out instead.