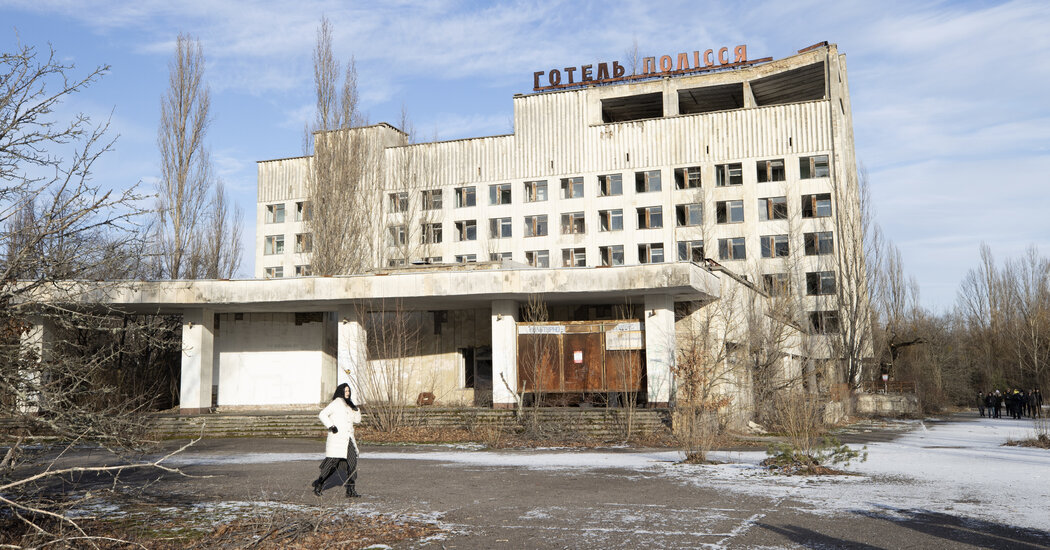 What a Potential Russian Invasion at Chernobyl Means

CHERNOBYL, Ukraine — Ukrainian soldiers, Kalashnikov rifles slung over their shoulders, patrolled through a silent, snowy forest, past houses abandoned for so long that vines twirled through shattered windows.

The fields lie fallow, the cities deserted and the entire Chernobyl area in northern Ukraine is still so radioactive it seems the last place on Earth anyone would want to conquer.

But while most of the attention around a possible Russian invasion focuses on troop build-ups and day-to-day hostilities in the east, the shortest route from Russia to Ukraine’s capital, Kyiv, goes through the north. And it passes through the isolated area around the Chernobyl power plant, where a reactor meltdown in 1986 caused the worst nuclear disaster in history.

In one of the incongruities of the war, this makes Chernobyl an area that Ukraine feels it must defend, forcing its military to deploy security forces into the eerie and still radioactive forest, where they carry both weapons and equipment to detect radiation exposure.

“It doesn’t matter if it’s contaminated or no one lives here,” said Lt. Col. Yuri Shakhraichuk of Ukraine’s Border Guard Service. “It’s our territory, our country, and we have to defend it.”

Ukrainian forces in the area, known as Chernobyl Exclusion zone, would not suffice to repel an invasion, if it came; they are there mainly to detect warning signs. “We are collecting information on the situation along the border” and passing it on to Ukrainian intelligence agencies, Colonel Shakhraichuk said.

The concept of Chernobyl Exclusion zone when the Soviet authorities created it three decades ago was to limit, through isolation, the lethality of the nuclear plant accident. Radioactive particles left in the ground or trapped under the destroyed reactor’s containment structure as they slowly decay would pose little risk to soldiers, as long as those soldiers did not linger in heavily irradiated areas. But the land must be abandoned, in some places for hundreds of years.

Two months ago, the government deployed additional forces to the region, due to heightened tensions with Russia and Belarus, a Kremlin ally whose border is eight kilometers from the stricken reactor and where Russia recently moved troops.

“How can this be?” said Ivan Kovalchuk, a Ukrainian firefighter who helped put out the factory fire in the first days after the accident, risking his life alongside Russians and people from the former Soviet Union. He said he was outraged that Russia could potentially threaten the area militarily.

“We liquidated the accident together,” Mr. Kovalchuk said. “That they are doing this to us now makes me feel sorry for the people” in Ukraine, he said.

Reactor No. 4 at the Chernobyl nuclear power plant exploded and burned during a test on April 26, 1986, releasing approximately 400 times more radiation than the bombing of Hiroshima. Thirty people died immediately after the crash, most from radiation exposure; studies of longer-term health effects have mostly been inconclusive, but suggest that there could possibly be thousands of cancer deaths.

Although the area is uninhabitable, it attracts tourists for short visits, generating income, and is considered in Ukraine as a good time to learn about recent history.

At the time of the accident, Ukraine was a Soviet republic, and at first the Soviet authorities tried to cover up the disaster. To avoid arousing suspicion, they held May Day parades in Ukraine a few days later, parading schoolchildren through swirling radioactive dust.

This ruthless attitude helped stoke anti-Soviet sentiment throughout Russia, Belarus and Ukraine, the republics most affected, and the accident is now considered one of the causes of the collapse of the Soviet Union. five years later.

The Chernobyl zone covers about 1,000 square miles straddling the shortest direct route between the Belarusian border and Kyiv. Although not necessarily the most likely route of invasion from the north, as it is swampy and densely forested, Ukraine has not ruled it out.

Before last fall, the 700-mile border between Ukraine and Belarus was almost unguarded, especially in the irradiated areas. About 90 miles of border separates the Ukrainian area from a similar isolated, irradiated area in Belarus, called the Polesie State Radioecological Reserve.

That changed in November amid a migrant crisis in Belarus and a buildup of troops in Russia.

The two developments were ominous in combination. Moscow began massing troops in a way that hinted at plans for an incursion into Ukraine via Belarus. Kiev also feared that Belarus would create a provocation such as the herding of migrants towards the Ukrainian border – as Belarus did with Poland – and provide the spark for war.

Ukraine responded by deploying an additional 7,500 guards to the Belarusian border. Colonel Shakhraichuk of the Border Service said he could not disclose the number of people who went specifically to Chernobyl. But fears of a Belarusian incursion have only grown this week as Russia directs troops and equipment there ahead of planned joint drills with Belarus in February.

Only about a dozen soldiers were visible in the border area during a recent visit, but officials said others were patrolling elsewhere.

The area is a painful workplace. In the days following the crash, around 91,000 people were evacuated with just hours’ notice.

Forests grew around their former homes. Peering through the windows reveals clothes, shoes, dishes, and other remnants of ordinary life lying around, covered in dust and lichen.

Ominous warnings. Russia called the strike a destabilizing act that violates the ceasefire agreement, raising fears of further intervention in Ukraine that could drag the United States and Europe into a new phase of the conflict.

The position of the Kremlin. Russian President Vladimir V. Putin, who has increasingly portrayed NATO’s eastward expansion as an existential threat to his country, said Moscow’s military buildup was a response to the deepening Ukraine’s partnership with the alliance.

In the largest city, Pripyat, now a ghost town, a propaganda billboard still extols the virtues of civilian nuclear energy. “Let the atom be a worker and not a soldier,” it reads.

The risk of a war spreading further radiation seems minimal. But one object in the area is particularly vulnerable: a new $1.7 billion stainless steel arch over the destroyed reactor, paid for mainly by the United States and around 30 other countries. It was completed in 2016 to prevent the spread of highly radioactive dust.

The city of Chernobyl is still partially occupied by workers who live there during rotations. They hold the containment structure above the damaged reactor, roads and other infrastructure.

“We don’t know which will kill us first, virus, radiation or war,” said Oleksei Prishepa, a worker standing at the store’s counter, with a shrug.

Mr Prishepa said he would prefer Ukraine to set up the defensive lines further south, handing over the irradiated area to whoever wanted to. “It’s a wasteland,” he said. “No crop will ever grow here.”

Most of the time, soldiers on patrol face little risk from radiation. But there are longer-lived particles left, creating invisible and deadly hotspots in the forest. Some emit levels of radiation thousands of times higher than normal. The soldiers have marked routes to avoid these places long since mapped by scientists.

Yet when patrolling the area, soldiers must wear devices on a lanyard around their necks that constantly monitor exposure; according to area patrol protocols, if a soldier comes across a heavily irradiated area, they are removed from duty to avoid further exposure.

So far, none of the border guards deployed to the area in November have been exposed to high doses, according to Colonel Shakhraichuk.

“There are very dangerous places to avoid,” said Major Aleksei Vegera, who serves in the Chernobyl police. Members of this force, used to working in the area, accompany border guards during patrols.

Pastor gets audience over tweet warning against LGBT pride