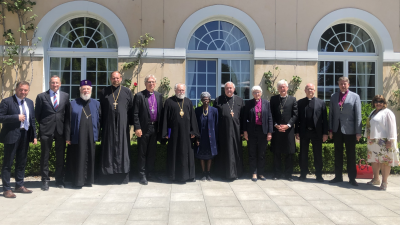 WCC delegates at the 10 June discussion

It took place on June 10 at the Ecumenical Institute in Bossey, Switzerland, and the following statement was written.

“With very deep sadness and regret, we again missed the presence of representatives of the Russian Orthodox Church, due to very recent changes in the hierarchy of the Moscow Patriarchate, which had nevertheless committed to take part in our rally,” read one post. of the round table. “Clearly, the absence of these key counterparts has been a fundamental obstacle to the purpose for which we have come together – that of dialogue and mutual consultation.”

The participants strongly reaffirmed the common ecumenical position expressed by the participants of the first round table, in particular the rejection of war against the will of God and the use of lethal military force as a means of resolving disputes – in Ukraine or elsewhere.

“We reiterate our denunciation of the unjustified and illegal military aggression launched by the leadership of the Russian Federation against the people of the sovereign state of Ukraine,” the message read. “We call again for an immediate ceasefire and for dialogue and negotiations as the only morally acceptable course.”

Participants again raised the consequences of war for the poor and vulnerable around the world, especially given the escalating global food crisis and accelerated trajectory to climate catastrophe.

“Despite the absence of our dialogue partners from Russia at this meeting, we re-emphasize the crucial importance of the WCC as a platform for encounter and dialogue between the churches and communities most directly affected by this war. “, we read in the message. “This is the key and unique contribution that the global ecumenical movement can make to the peaceful resolution of this crisis for which we all hope and pray.”

The round table underlined that the call to dialogue, to encounter and to the search for mutual understanding is the very essence of ecumenism. “Division and exclusion are the antithesis of our movement’s goal,” the message read.

“Nevertheless, we strongly reject the apparent instrumentalization of religious language by political and religious leaders to support an armed invasion of a sovereign country. There is an urgent need to help reverse the trend of division, confrontation and conflict. , and to help heal the deep wounds created in the global community by this brutal ongoing war.”

SITC: A public announcement in accordance with paragraph 4 of article 25 of the Regulations Governing the Loans of Funds and Endorsements/Guarantees by Public Enterprises.