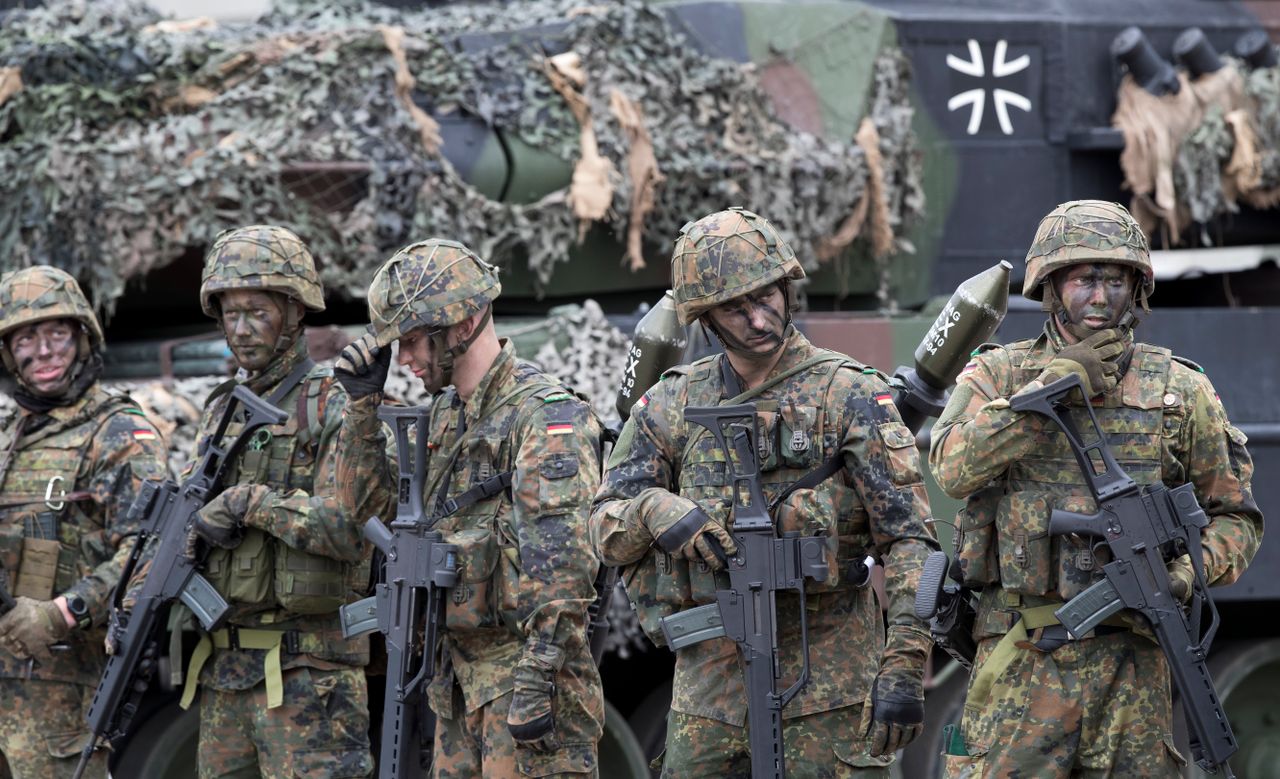 Warmongering against Russia in the name of Auschwitz

The more the US and NATO escalate their war campaign against Russia, the more aggressively the ruling class in Germany behaves. The media are caught up in a veritable war frenzy and demand that the German government finally supply arms to the anti-Russian far-right regime in Kiev.

No lie or distortion is too big for them and no propaganda is too dirty. Many newspapers used the anniversary of the liberation of the Auschwitz concentration camp on January 31, 1945 to use the historical crimes of the Nazi regime to justify new imperialist crimes and a more aggressive German war policy.

“In the event of a Russian invasion, NATO must also support Ukraine with military equipment”, asks the former editor of the Suddeutsche Zeitung Kurt Kister in an article. At the same time, “the aggressor must suffer serious political and economic disadvantages, even if this would lead to supply bottlenecks, price increases or recession in the West.” This too was “one of the lessons of the past”.

Berthold Kohler, editor of the curator Frankfurter Allgemeine Zeitung (FAZ), supports the same. In a comment entitled “Lessons from Germany’s past”, he refers to the federal Social Democratic Party-Green Party, which in 1999 justified Germany’s first war mission since the end of the Second World War. World War against Yugoslavia with the cynical argument that Germany was obliged, because of Auschwitz, “to use military force if necessary to oppose ‘ethnic cleansing’ in the Balkans”. Now, on the grounds that the Ukrainians had “suffered the most from Hitler’s war of extermination”, he is demanding deliveries of German arms to Kiev.

This perfidious argument is repeated over and over again by the media in their calls to arm the Ukrainian government for war against Russia. In a slave guest post for the FAZ, ex-Maoist and anti-Communist Bernd Koenen states that the Germans “indeed have a historic debt to repay, but certainly not first to ‘Russia’, but first towards Jews and Poles, Belarusians and Ukrainians, and finally also to Russians.

The foreign policy coordinator Die Zeit, Jörg Lau, criticizes Green Foreign Minister Annalena Baerbock for having “rejected Ukrainian wishes for defensive weapons with a radical reference to ‘German history'”. Indeed, from the history of tens of thousands of Ukrainian villages devastated by the Wehrmacht [Hitler’s army], one could also deduce the opposite. Lau reminds Green Economy Minister Robert Habeck of his election campaign statement that it would be “difficult to deny Ukraine weapons for defence.”

The professional liars of the bourgeois editorial offices falsify several things at once. First, German crimes in Ukraine – including the Babi Yar massacre, which claimed the lives of more than 33,000 Jewish men, women and children – were an integral part of the war of extermination against the Soviet Union, which claimed the lives of 27 million people. . When Nazi Germany invaded Ukraine and established a murderous occupation regime, it was part of the Soviet Union.

In fact, the new German war policy, for which Kohler, Kister and Co. foam at the lips, is part of the Nazi tradition. Today, too, it is not Russia that is the aggressor, as official propaganda would have you believe, but the imperialist powers. Since the dissolution of the Soviet Union 30 years ago, NATO has systematically encircled Russia. In early 2014, Washington and Berlin orchestrated a right-wing coup in Ukraine to bring an anti-Russian regime to power in Kiev.

In doing so, they relied on fascist forces such as the Svoboda Party and the Right Sector. All references to Wehrmacht crimes in Ukraine cannot hide the fact that the NATO powers in Kiev support and arm a government that reveres Nazi collaborators like Stepan Bandera and Roman Shukhevych and mobilizes army units and militias that openly express their fascist and anti-Semitic sentiments.

This reactionary offensive against Russia, which invokes the danger of a third world war, is also supported by the current German government.

In his speech to the Bundestag (federal parliament) last Thursday, Baerbock made it clear that Germany flatly rejects Russian demands for security guarantees, saying they are “not compatible with the European security order”. She then threatened Moscow, saying it had been “crystal clear that further military action against Ukraine would have massive consequences for Russia.”

Government representatives from the Liberal Democrats (FDP) and Social Democrats (SPD) spoke in equally martial terms. Germany must “leave no doubt that we uphold international law”, Federal Finance Minister Christian Lindner (FDP) told the Welt television channel. “If the Kremlin violates borders – and by that I mean territorial borders as well as legal and political borders – then Moscow must be clear that we are ready for ironclad consequences.”

On Monday evening, the SPD leadership joined the propaganda chorus. Claiming to speak on behalf of “the entire SPD”, party leader Lars Klingbeil said after a meeting of the party leadership that “the escalation we are currently experiencing on the Russian- Ukrainian comes from Russia”. As Russia attacks “the territorial integrity of Ukraine” and “crosses the border politically and geographically”, there will be “a clear, firm and consistent response from Germany, Europe, transatlantic partners “. All options were “on the table”.

If the German government has so far been reluctant to deliver offensive weapons to Kiev, this has nothing to do with pacifism. On the one hand, she fears having to bear most of the economic burden of the conflict with Russia, with which Germany maintains close economic and energy relations. Of the 90 billion cubic meters of gas that German factories and households consume each year, almost 60 billion currently comes from Russia. This is why representatives of the energy industry, led by former Chancellor Gerhard Schröder (SPD), are warning against an escalation of the conflict.

On the other hand, some representatives of the ruling class plead for a certain balance with Russia so as not to become even more dependent on the United States, the militarily dominant member of NATO. An armed conflict over Ukraine would further strengthen the role of the United States and thwart German and French plans for an independent European military and foreign policy.

Last weekend, the head of the German Navy, Vice Admiral Kay-Achim Schönbach, had to resign after arguing for an alliance with Russia against China during a roundtable in India. Schönbach apparently expressed what many German military leaders think. He explained that it would also be in the interest of the United States, but that this country was obviously preparing a war against Russia.

Despite differences with the United States and its closest allies in Britain and Eastern Europe, the majority of the ruling class in Germany is also engaged in confrontation. He does not want to stand aside when it comes to crushing and subjugating Russia. In doing so, it pursues its own economic and geostrategic interests.

“For the moment, we leave the price of the war in Europe to the Americans. I find it shameful,” complained former Social Democratic Foreign Minister Sigmar Gabriel in an interview with Bild am Sonntag. “We disagree on the assessment of the situation in Ukraine, fear for our economic interests and are happy that others are pulling hot potatoes from the fire for us. We Europeans must learn to take our interests into our own hands.” Europe must finally become “sovereign” and a “geopolitical player”, he said.

A military confrontation with the nuclear powers Russia and China would mean World War III and the destruction of the entire planet. Nevertheless, the imperialist powers are marching towards exactly that. The reason for this is not only megalomaniacal geopolitical goals, but also the deep internal crisis of capitalist society.

“The enormous disruption of social life caused by the global pandemic has fundamentally destabilized all bourgeois regimes,” reads the statement “Are You Ready for World War III? by the WSWS Editorial Board. “It is the explosive social crisis of the pandemic and the emergence of open class struggle that is pushing the ruling class to war.”

The German media are all the more carried away that, in spite of a permanent warmongering, they do not manage to rally a war against Russia. At the end of January, a Politbarometer poll by broadcaster ZDF showed that 73% of respondents were opposed to arms deliveries to Ukraine, against only 20% in favor. Along with concerns about the threat of war, opposition to the government is also growing. According to a Forsa poll from February 1, 86% are worried about current developments and 63% are dissatisfied with government policies.

This opposition needs a clear political perspective and direction. There is only one way to stop the dangerous development of war: building an international anti-war movement based on the working class and fighting for the overthrow of capitalism and a socialist perspective.

After three decades of wars led by the United States, the outbreak of a third world war, which would be fought with nuclear weapons, is an imminent and concrete danger.