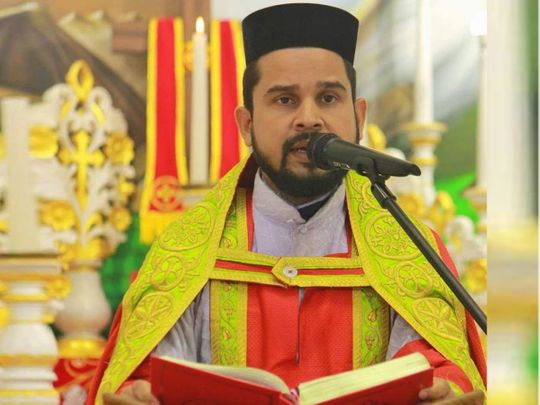 Church members described Father Eldhose “as a very good leader in the spiritual and social activities of the church. He was also a good scholar ”.

Father Eldhose is survived by his wife and three children, all in India. A funeral service for Father Eldhose will be held Thursday at the Syrian Jacobite St. John’s Pindimana Church in Kothamangalam while a condolence meeting and Holy Qurbana will be held at the St. George Jacobite Syrian Orthodox Church in Al Ain on Wednesday evening .

Scholar of the Church

Originally from Kothamangalam in the Ernakulam district of Kerala, Father Eldhose was appointed vicar of the Syrian Orthodox Church of Al Ain in January 2021 after serving for 12 years in various Syrian Orthodox churches in Kerala.

Father Basil P Jacob, new vicar of Saint George Jacobite Syrian Orthodox Church, said that Father Eldhose was a very good priest and an excellent scholar who received the first rank in theological studies at a theological seminary in Kochi. He was also secretary of Catholicose His Beatitude Dr Aboon Mor Baselios Thomas I.

Father Eldhose was diagnosed with pancreatic cancer in November of last year. He was sent to Christian Medical College in Vellore, Tamil Nadu, for treatment, but the cancer had already spread to his liver and other organs. He died in the same hospital in the early morning hours of January 5.

message from the vicar

On the church’s website, Father Eldhose noted that St. George was the largest Syrian Jacobite Orthodox church outside of India.

“Our church was established 30 years ago to serve the spiritual growth of the Syrian Jacobite community from Malankara to Al Ain… The continued commitment, goodwill and support of the members of this church is reflected in their active participation in all the spiritual and social activities of this parish. This church, from its humble beginnings to the present day, has never strayed from our tradition of a rich Christian spirit, religious affiliation and fraternal concern for others… May God bless you all ”, he said. he writes.