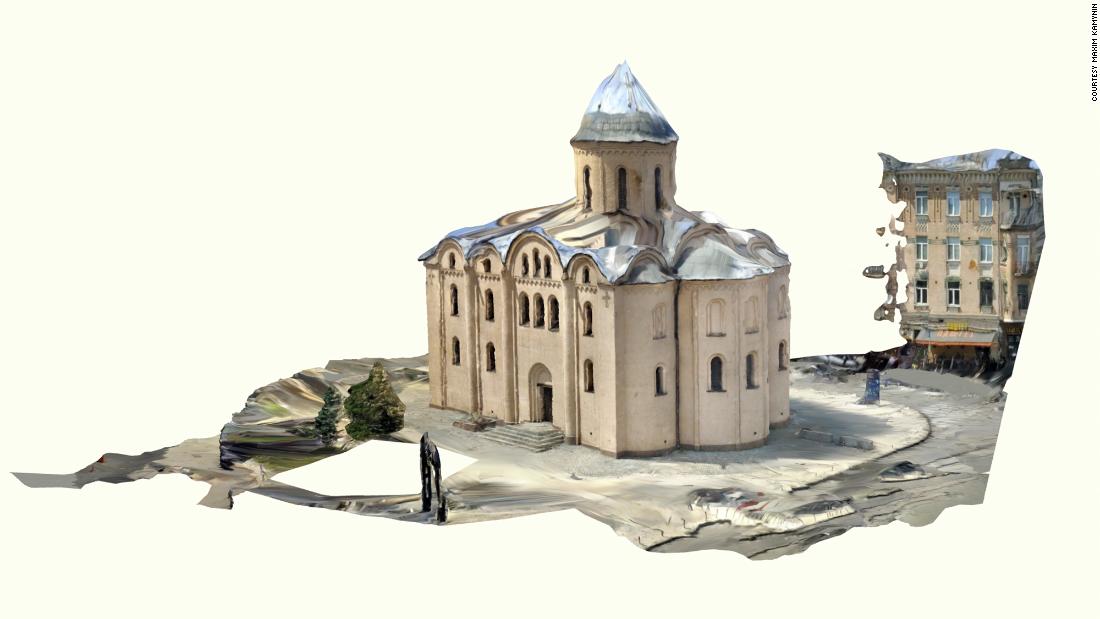 An exploded Russian tank near Kyiv, a monument to Ukrainian writer Borys Hrinchenko, a building destroyed by artillery and a slide in a children’s playground covered in graffiti.

In Ukraine, these objects are among hundreds of landmarks, cultural sites, monuments and everyday objects that civilians have scanned on cellphones through an app called Polycam. The app’s software generates a detailed 3D model that will live permanently in a digital archive as part of an initiative called Backup Ukraine.

The project, launched in April shortly after Russia invaded Ukraine, aims to digitally preserve the country’s cultural heritage, away from the reach of Russian attacks. According to the creators of the project, the scans are of such high quality that they can be projected into a physical space to explore for educational purposes and can also be used to reconstruct destroyed cultural artifacts.

Backup Ukraine is the brainchild of VICE creative agency Virtue Worldwide, which has partnered with Blue Shield Denmark, a group that helps protect world cultural heritage sites, and the Danish National Commission for UNESCO .

“What we wanted to fight against was the deliberate destruction of Ukrainian heritage as an act of terror, of national intimidation. It turned out to be very, very real,” said Tao Thomsen, creative director of Virtue Worldwide and co-creator of Backup Ukraine. .

Ukrainian Ministry of Culture documented 367 war crimes against the country’s cultural heritage as of May 27, including the destruction of 29 museums, 133 churches, 66 theaters and libraries and a century-old Jewish cemetery, according to its website.

With Backup Ukraine, for the first time in history, a country’s artifacts are documented in augmented reality during an ongoing war, a precedent that has sparked conversations about how this technology can be used in other countries in conflict or at war. The team is also exploring the possibility of creating 3D models of destroyed churches and buildings that have not been scanned, using digital images from the past.

“We’ve set a precedent here in terms of protecting cultural artifacts and a model, a system that people can use as conflict develops,” said Iain Thomas, group creative director at Virtue Worldwide and co-creator. of the project.

“One of the most amazing things is that people are scanning monuments, statues and sculptures, but they are also scanning small aspects of their lives – things they own, appreciate and cherish,” Thomas said.

Backup Ukraine’s team is integrating local project managers to “slowly transfer ownership to the Ukrainians themselves”, and 150 people have joined as volunteers, scanning up to 10 culturally relevant heritage items each day, it said. Thomsen said. Since its launch, more than 6,000 people in Ukraine have downloaded the Polycam app to access digital archives.

Max Kamynin, a Kyiv resident and architect, says he volunteered for the initiative about a month ago and allocates three to four days a week to do scans, during which he aims to create 15 to 20 high quality scans. Before each scanning day, Kamynin makes a list of monuments, historical buildings or objects destroyed by Russian forces and follows the route, he says.

“Now a lot of big monuments are covered with bags, so I can’t scan them. But that doesn’t really bother me because Ukraine is very rich in history and you can always find something interesting to scan,” did he declare.

It took Kamynin about an hour to scan the Church of the Assumption of the Virgin Pirogoshcha, an Orthodox cathedral in Kyiv, originally built in 1132. It was the first building in Kyiv constructed entirely of brick without using of stone, according to the church’s website. The church was destroyed in 1935 during the Soviet era, but was later rebuilt in the late 1900s.

Kamynin made a 3D scan of the Church of the Assumption of the Virgin Pirogoshcha, an Orthodox cathedral in Kyiv, originally built in 1132. Credit: Courtesy of Maxim Kamynin

“Tall buildings are harder to scan than sculptures or monuments,” Kamynin said. “You should go around the whole building and if possible use a drone to improve the scan.”

The creators of Backup Ukraine say it has turned into a movement, as Ukrainian civilians increasingly recognize the importance of protecting their country’s history, art and culture and turn to its coming.

“We advise people not to scan in areas where there is immediate conflict,” Thomsen said. “There is a risk of slippage every time you go out in a country very much at war. We cannot ignore it. And yet, people still go out by the dozen every day to scan. This proves to me that the pride of this is a very strong driving factor.”

Since the start of the war, Ukraine’s cultural sector has scrambled to protect churches, museums, statues and works of art as they continue to suffer damage.

Ukrainian President Volodymyr Zelensky has called on UNESCO to withdraw Russia from its membership because it has destroyed “so many monuments, cultural and social sites in Europe since World War II”. CNN previously reported.

Kamynin created a 3D scan of one of the destroyed buildings in Borodyanka, Ukraine using the Polycam app. Credit: Courtesy of Maxim Kamynin

One of Borodyanka’s destroyed buildings that was 3D scanned. Credit: Courtesy of Maxim Kamynin

Backup Ukraine leaders are in regular contact with the Heritage Emergency Rescue Initiative – a Ukrainian initiative under the Ministry of Culture – and coordinate with professionals in the 3D scanning industry, in Ukraine and around the world, to digitize at a faster rate and on a larger scale.

The project partners are also in talks with local departments of the Ministry of Culture on the digitization of high-level heritage sites on the list of UNESCO World Heritage Sites, in particular the historic center of Lviv and the Cathedral of St. -Sophie of Kyiv, according to Thomsen.

“What is being done now is almost like making Ukrainian history indelible, resistant to time,” said Shevchuk, originally from Ukraine. “You can use it as an education for students but also for Ukrainians themselves and for the world. The project also causes us, as Ukrainians, to rethink and rediscover what has been largely unnoticed.”

“Ukraine, its identity and achievement simply do not exist [to Russia]but that they are a variety of Russian civilization,” Shevchuk said. “These attributes of Ukrainian identity like culture, language, literature, music and architecture are really something that marks Ukrainians as being original, inimitable and unlike any other nation.”

They must be preserved, he says.

Understand the political consequences of the Russian-Ukrainian war