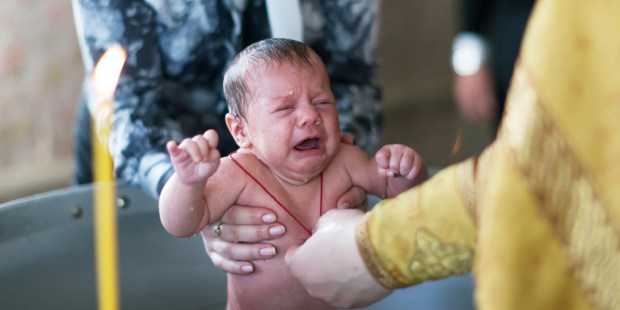 Ukrainians and Russians remember the baptism of Saint Volodymyr

Earlier this month, fans of the British Royal Family focused on the christening of their newest member, Archie Harrison.

But this week in Russia, many babies were immersed in a river to commemorate a baptism that changed the course of history.

At the end of the 10th century, Volodymyr (or Vladimir) reigned over the principality of Kyivan Rus’. While there were already Christians in the land, thanks to the 1st century evangelism of the apostle Andrew, and indeed even Volodymyr’s grandmother, Olha (Olga), was a Christian, Kyivan Rus was in largely a pagan society.

Both Volodymyr and Olha are recognized as saints in the Catholic and Orthodox Churches.

Volodymyr believed his people would benefit from adopting one of the world’s major religions. But none of the reports he received from his envoys, who went to other countries to explore Western Christianity, Judaism or Islam, convinced him.

But then when his legates returned from Constantinople and declared that they were so moved by the Divine Liturgy they had attended in the Cathedral of Saint Sophia that they “did not know whether we were in heaven or on earth”, Volodymyr decided to bring Byzantine Christianity to his nation. He himself was baptized in the Crimea, just before marrying Anna, the sister of the Byzantine emperor Basil II. He then returned to Kiev, where he proceeded to replace pagan monuments with Christian churches.

Over the following centuries, Christianity spread among the Slavs, especially in the nascent kingdom of Muscovy, which over time was renamed Russia.

Kyivan Rus’ baptism continues to be celebrated publicly every year. In Russia, in fact, July 28 is a public holiday.

In Kiev, the capital of Ukraine, the Ukrainian Orthodox Church, which gained ecclesiastical independence from the Ecumenical Patriarchate of Constantinople in January, held a procession to mark the anniversary. Between 20,000 and 30,000 participants took part, according to Euromaidan Press.

Ecumenical Patriarch Bartholomew sent a message of greeting, which was read during the celebration

â€œSince the Church of Constantinople, which gave birth to and revived all the Ukrainian people and its quintessence – the conscience of the Church – being a few meters from the place where the Holy Princess Olha was baptized, it is with a extraordinary honor and joy that we convey to you Patriarchal blessings and best wishes to all the people of God and greet with a holy kiss His Beatitude Metropolitan Epifaniy of Kiev and all Ukraine, the good shepherd of the Church of Ukraine, and all the holy bishops without exception who have gathered here, â€Patriarch Bartholomew mentioned greetings.

In the Ukrainian Greek-Catholic Church, Major Archbishop Sviatoslav Shevchuk of Kiev-Halych presided over the renewal of baptismal vows during the Divine Liturgy in the Patriarchal Cathedral of the Resurrection in Kiev. The rite of renewal on the baptismal day of Saint Volodymyr was introduced in 2006 by his predecessor, Cardinal Lubomyr Husar.

â€œPrince Volodymyr’s treasure of faith becomes the treasure of every Ukrainian, every son and daughter of the Church of Christ,â€ Archbishop Shevchuk said, according to the Church’s website.

And, according to Euronews, mass baptismal rituals were held across Russia on Sunday. About 150 people from Yekaterinburg and neighboring towns attended the traditional annual outdoor rites on the Chusovaya River in the Sverdlovsk region.

The ritual took place in the village of Stansionny-Polevskoy. “The people participating in the baptismal ceremony were immersed in the river and put on white clothes to symbolize the purity of the soul,” Euronews said. “They were then anointed with holy oil.”