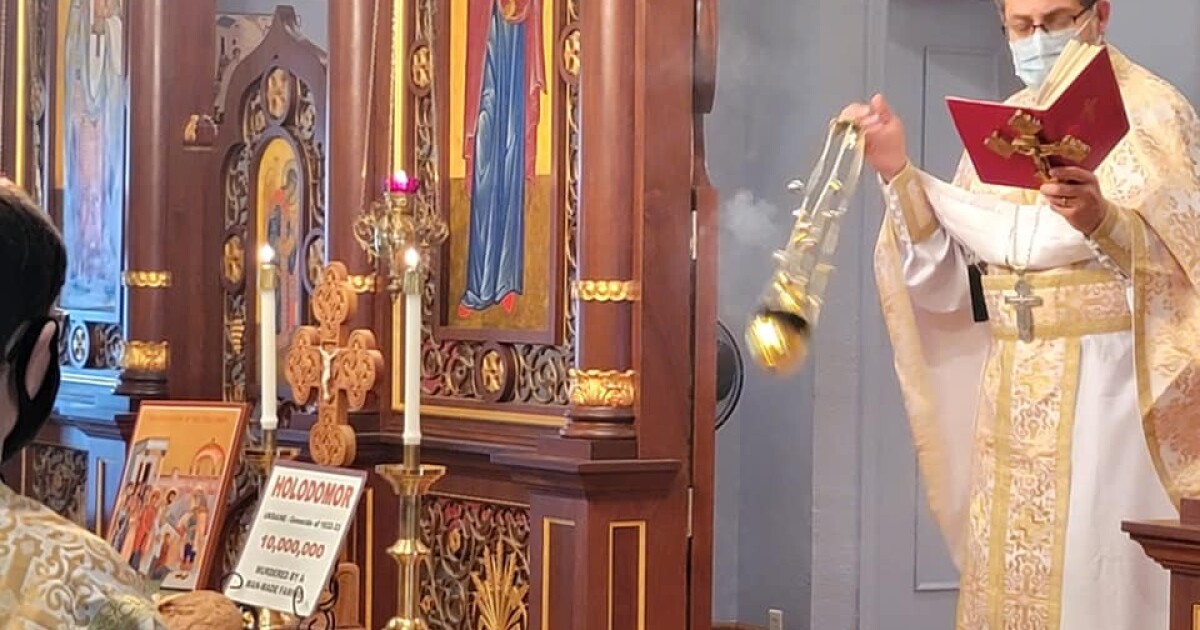 Ukrainian Texans pray for peace as tension mounts with Russia

On Sundays, parishioners of St. Sophia Ukrainian Greek Catholic Church in The Colony recite a prayer for the “Old World.”

“We also pray for peace…especially for peace in Ukraine,” the priest chanted.

Marta Petrash is one of the founders of St. Sophia, which was founded in the early 1990s in suburban Dallas. About a thousand Texan families of Ukrainian descent attend the church.

For Petrash, peace in Ukraine means freedom from centuries of murderous aggression by the Russian government. Conflicts over the past decade include Russia’s use of force to annex Ukraine’s Crimean Peninsula. This ended an ongoing war in eastern Ukraine between Russian-backed separatists and the Ukrainian government. More than 13,000 people died in this war.

“We pray for the freedom of Ukraine. We pray for the sovereignty of Ukraine,” Petrash said. “And we pray to God: ‘Help us to resist this threat which comes from the aggressor country which wants to deprive us of our right to freedom.’ ”

Petrash was born in Ukraine in 1960 and lived there while the country was under Soviet rule. She says she was part of the Ukrainian independence movement before the fall of the Soviet Union in 1991.

“I understand very well the aspirations of the Ukrainian people because my parents were members of intelligentsiasaid Petrash.

“My mother was a doctor and her father was a university professor, and they instilled in me a very strong sense of Ukrainian identity. I lived through the brutality of [Soviet] diet. … Even then there was complete brainwashing and communist propaganda.

Shortly after Ukrainian independence, Petrash moved to Texas where she worked to establish economic relations with the oil industries of Texas and Ukraine. She joined the Ukrainian American Society of Texas.

Chrystya Geremesz is a founding member of UAST. His parents immigrated to the United States after World War II.

“They couldn’t go back to Ukraine because of the political position of the Ukrainians who fought against the Russians, which my father did,” Geremesz said.

Geremesz, a real estate agent now in his 60s, grew up in a Ukrainian community outside of Philadelphia. There, his family continued to celebrate their legacy. Geremesz was immersed in the language, food and culture of Ukraine. When she moved to North Texas in the early 1980s, she found it harder to connect to her Ukrainian roots. (On 23,000 people of Ukrainian descent live in Texas, compared to 97,000 in Pennsylvania.)

“I felt really lost without my Ukrainian community,” Geremesz recalls. “So I had a sticker on the bumper that said, ‘Sound your horn, if you’re Ukrainian.’ Surprisingly enough, I found other Ukrainians and we actually started meeting regularly and eventually formed our non-profit organization..”

Geremesz is also one of the founders of Hagia Sophia. And through her church and the UAST, she was able to bring together more Ukrainians in Texas and educate others about the country, and especially its struggle for sovereignty from Russia.

Geremesz says that one of his greatest accomplishments through UAST is organizing an exhibition on Holdomor, a genocide of Ukrainians that occurred between 1930 and 1932, when the Soviet Union was under the rule of Joseph Stalin. In an effort to suppress movements for Ukrainian sovereignty from Soviet Russia, Stalin methodically starved 3.5 to 7 million Ukrainians.

“Unfortunately, we have a history of brutality with Russia,” Geremesz said.

“Ukraine has fought so hard to get a democratic, sovereign and independent state,” she said. “Ukraine never wanted to be part of the Soviet Union. Unfortunately, he was taken by force, by brutality, and so he was held captive. The tongue has been removed. Culture was mastered. It was illegal to do anything with an ID on Ukraine.”

Oksana Lutsyshana, associate professor at the University of Texas in the Department of Slavic and Eurasian Studies in Austin, is originally from Ukraine and specializes in Ukrainian literature. She has lived in Texas since 2015, but most of her immediate family still lives in Ukraine.

Lutsyshyna says there is concern, but also confusion about what will happen as it can be difficult to parse fact from fiction in a part of the world that has fallen victim to Russian propaganda .

“It is a country that emerged from this conglomeration of the Soviet Union where every news was a lie. People can be very critical of news and move very carefully in this ocean,” Lutsyshana said.

“It is true that this area has been a target area for the Kremlin in terms of propaganda and information warfare since the collapse of the Soviet Union. So it was decades. … It’s on, you know, on TV … on social media. It has had a devastating effect on politics and what people elect.

When Marta Petrash checks in with her family in Ukraine, she doesn’t hear as much fear as she expected, she says.

“It’s a very, very dangerous situation, but Ukrainians have gotten used to this, you know, this life that requires sacrifice. And the Ukrainians are not going to give up“, Petrash said.

Petrash wants the Biden administration to take a tough approach in its talks with Russia. She and Geremesz wish that sanctions have already been imposed on the country and that the United States provides more support for the Ukrainian army.

Meanwhile, Geremesz heard reports of the formation of community militias in support of the Ukrainian military.

“So civilians, doctors, lawyers, students are training right now with weapons and protective gear, whatever they can find,” Geremesz said. “They learn to use tactics to be able to protect their land, wherever they are in Ukraine.”

This story was produced in conjunction with Reporting Texas, an online publication of the University of Texas at the Graduate School of Journalism and Media in Austin.

If you found the above report useful, please consider making a donation to support it here. Your donation helps pay for everything you find on texasstandard.org and KUT.org. Thank you for donating today.