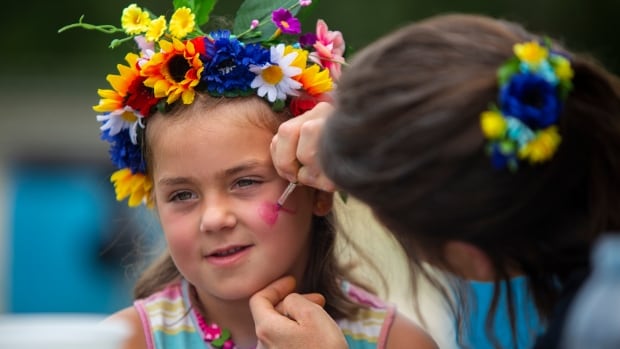 The Ukrainian National Festival of Canada made a triumphant return to the stage this weekend in Dauphin.

Cory Lafontaine, a member of the festival’s board of directors, said the planning for this year’s event in the western Manitoba town was unique – not only was it the first in-person festival since 2019, due to pandemic cancellations, but also the first since the Russian invasion of Ukraine began in February.

“We really want you to enjoy Ukrainian culture and all it has to offer,” Lafontaine said. “There’s a lot of history there and with our festival we try…to do a really good job of getting that message across.”

The festival, which began in 1965, provides an immersive experience of Ukrainian culture for visitors to Dauphin, a town of about 8,400 people, including many people of Ukrainian descent.

Walking through the gates of the festival can be a “magical” feeling, said Lafontaine, which takes visitors back to their Ukrainian roots. Food, music and dance capture the heart of Ukrainian culture and help people feel part of a larger community, he said.

“The atmosphere is fantastic this year.”

Lafontaine said he couldn’t speak personally about the war in Ukraine, but he was in contact with refugees who moved to the Parkland area in southwestern Manitoba.

“Here at our festival, we’ve welcomed them with open arms, and we have some volunteering with us and we have others planning to come,” Lafontaine said.

Organizers thought about planning the festivities because they wanted to respect ongoing war efforts in Ukraine, he said. The goal was to bring people together and help family and friends connect in person.

Ukrainian newcomers from Brandon, Winnipeg and Saskatchewan joined in the celebration, Lafontaine said.

She made the trip with a group of over 30 people. Their campsite was decorated to celebrate Ukraine with flags, ribbons and a giant wreath.

“It’s a camaraderie. It’s… being part of something bigger than what exists and being with ‘stand with Ukraine,'” Ripplinger said. “It is important.”

This year marked his second participation in the festival, and it is different because of the war in Ukraine.

It’s sad to know what’s happening in the beleaguered country, she said, but she was inspired by the resilience of newcomers displaced by the Russian invasion.

“If we lose our culture – the food, the folk dance culture – then we lose…that in every nationality,” Ripplinger said.

She cherished the opportunity to shamelessly celebrate and immerse herself in Ukrainian culture, a rare opportunity outside of her church.

“There’s something for everyone” at the festival, Ripplinger said. “If you’ve never experienced it, come and see. The people are friendly and you don’t have to be Ukrainian to come here and enjoy it.”

The festival, which started on Friday, continues until Sunday.

She performed on the festival’s main stage for the first time on Friday, having attended the show for 25 years.

“It’s such a great environment with all the Ukrainian music, the Ukrainian culture, the people who are so committed to bringing Ukrainian heritage to Canada and keeping it alive,” Kuzyk said. “It’s just a wonderful atmosphere and environment.”

Dancing in the show and feeling the energy of the audience, as well as connecting with others over pride in Ukrainian culture, was a powerful emotional experience, she said.

Every Ukrainian dance is loaded with meaning, she said, and these experiences have been reinforced by the war in Ukraine.

Its teachings and history span many generations and have great meaning for people around the world, Kuzyk said.

“We know what’s at stake and how… we kind of take this stuff for granted. It just means a lot to try to preserve the culture in Canada and abroad, just try to keep it alive.”

Christopher Meyer, British ambassador to the US during 9/11, dies at 78