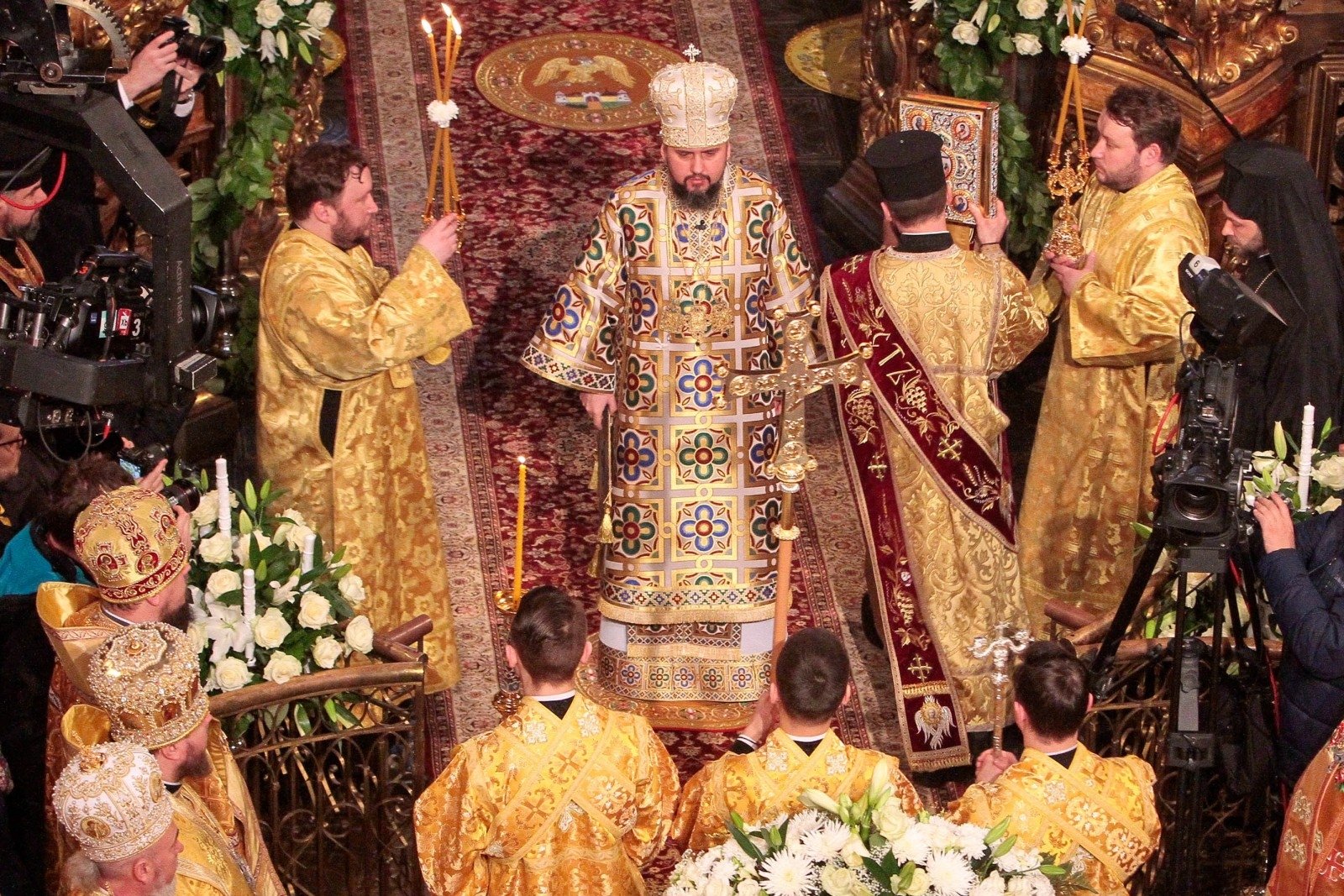 Epiphanes, 39, seems to be an ideal candidate: 1) he was never a member of the Moscow Patriarchate and did not initiate the schism; 2) had no crow to pluck with the MP hierarchies and is ready to start the OCU history over from scratch; 3) studied at the National and Capodistrian University of Athens (he spoke partly in Greek on January 6 at St. George’s Church).

However, all is not rosy.

First, the elected OCU primate depends on the head of the Kyiv Patriarchate Filaret (Denysenko) (despite his promise to Patriarch Bartholomew, Filaret has still not abolished the legal entity UOC-KP: he retains control over all his hierarchs who constitute a majority in the UCO).

Second, Epiphanes is heavily dependent on Petro Poroshenko (during his electoral campaign across regions of the country he must accompany the president and openly support him; if Poroshenko loses the elections, Epiphanes would have difficulty establishing relations with the new ones. leaders).

These are not Epiphanes’ worst problems. It was not canonically ordained – because all UOC-KP hierarchs of the “second generation” after Filaret were anathematized.

It should be noted that during the 2001-2003 negotiations with the Russian Orthodox Church on the Ukrainian question, many hierarchs ordained in the UOC-KP did not really believe that they were bishops. As a source told the Fanar, when they addressed the ROC with penance, they asked to accept them not as â€œbishopsâ€ but in the status they had before the schism (priest, deacon or layman). Then the Russians showed a number of these letters from the hierarchs of the UOC-KP.

Several years ago, a Ukrainian bishop from the Moscow Patriarchate who visited Greece claimed that many UOC-KP bishops and priests wearing civilian clothes were seen at the Kiev Pechersk Lavra on the day of Epiphany: after having sanctified the water in their temples, they secretly came to Lavra to drink the “real” holy water.

When the two exarchs of the Patriarchate were appointed in Ukraine, Kiev and Moscow were convinced that these two bishops would secretly reorder all the hierarchs of the OCU and restore its canonical hierarchy. The “secret reordination” is organized by the Ecumenical Patriarchate when a non-canonical diocese is to be accepted into communion without any humiliation in the eyes of the faithful. Hereby, such a procedure has been carried out for hierarchs of the UOC of the United States and of the Ukrainian Orthodox Church of Canada who have not been canonically ordained.

However, the Patriarch did not restore the canonicity of the OCU hierarchy. This happened due to the rush and pressure from Petro Poroshenko who was to unite the OCU and get the tomos before the start of the election campaign.

For the first time in the history of Constantinople, there was such a rush that the tomos was awarded without the signature of the members of the Holy Synod – on January 6, Patriarch Bartholomew presented the signed document with only two words: “ratified by B”. (“á¼€Ï€Î¿Ï†Î±Î¯Î½ÎµÏ„Î±Î¹ Î’.”). After that, the famous Archimandrite theologian Cyril (Hovorun) declared the tomos invalid, so a few days later he returned to the Phanar to be â€œfinalizedâ€ by the synod.

Maybe the OCU hierarchy will be â€œfinalizedâ€ in the same way? Now, however, its uncanonicity is causing confusion in other local churches.

Patriarch Bartholomew’s plan would have been different. He insisted that Filaret be excluded from the elections for the new primate of the church. The UCO was to be headed by Canonical Metropolitan Simeon of Vinnytsia of the Ukrainian Orthodox Church of the Moscow Patriarchate (UOC-MP). The Ukrainian president has repeatedly promised the Patriarch that 10 to 25 UOC-MP hierarchs will attend Sobor in December. He even handed over the list of them, which was rumored to have only been seen by Patriarch Bartholomew. However, the hierarchs of the Moscow Patriarchate ignore the Sobor: Simeon gets few votes and Filaret’s candidate is elected.

No matter how intensely former Metropolitan Filaret of Kiev asked Patriarch Barthlomew to hold a common divine service on January 6 at St. George’s Church, he refused. But the patriarch held him with Epiphanes, Filaret’s protege. However, when the patriarch visits Ukraine, he will not be able to refuse a common service with Filaret since there is a respected religious leader, head of the Church and “patriarch”, unlike Epiphanes. After an unsuccessful struggle, even Constantinople had to confirm its status as “patriarch”.

The ambiguity of the role of Filaret, the weakness of Epiphanius and the questionable legitimacy of the OCU hierarchy can slow down the process of his recognition by the local Churches. As Archbishop Daniel of Pamphylia stated in his interview with Romfea, the Church of Greece would recognize OCU “within a month or so”. Meanwhile, the Autocephalous Greek Orthodox Churches are still in doubt:

– The Archbishop of Cyprus: the Ukrainian people did not support autocephaly, the unity of orthodoxy is more important than autocephaly;

– Before the service in Jerusalem on January 7, the ordination of all the guests who took part was studied to exclude the representatives of the OCU;

– The Church of Alexandria remains silent and neutral.

Some metropolitans of the Church of Greece have commemorated Epiphanes (such as Chrysostom of Dabrobosan and Theoklitos of Florina) but there are also many opponents of the OCU (Metropolitans Ambrosius of Kalavryta, Seraphim of Piraeus, Seraphim of Kythera have publicly exposed their positions).

Relations between Athens and the Fanar are going through the worst period of recent years and Patriarch Bartholomew must be careful in negotiations with Archbishop Ieronymos of Athens if he is to gain recognition from the OCU. Yet the behavior of the Ecumenical Patriarchate in Greece is shortsighted: 1) it constantly threatens to revise the status of the New Lands in northern Greece, 2) the Fanar has opened its stauropegia in Athens against the archbishop’s will. , 3) the Patriarchate tries to unilaterally solve the problem of the Macedonian Church. Such an attitude arouses an anti-Fanari attitude in the Church of Greece. Many make an analogy, quite disturbing for the Greeks, between the OCU and the incongruous â€œChurch of Macedoniaâ€, which will probably soon be recognized by Constantinople.

Coming to Athens, the representatives of the Patriarchate would address the Archbishop with haughtiness, as to an inferior. It is no wonder that after the opening of Fanar’s stauropegia in Athens, Ieronymos did not attend the Crete Council in 2016 for “personal reasons”.

In the spring of 2018, the delegation from Constantinople came to Athens to inform the Church of Greece of the Patriarch’s intention to grant Tomos of autocephaly to the Ukrainian Orthodox Church. The Patriarchate would have waited for the recognition of its decision, but the Church of Greece deferred this question until the October session of the Synod. In October, the issue was not discussed. At the Holy Synod in January 2019, the discussion was again delayed. However, the recognition of the OCU could be discussed soon during an extraordinary session on the Macedonian question.

Now a delegation headed by Metropolitan Dimitrios of the Princes’ Islands is due to visit Athens. The official reason is to discuss the controversial agreement between the government and the Church of Greece which suppressed 10,000 priests. Another aim could be to put pressure on Archbishop Ieronymos on Ukrainian and Macedonian issues. But, to be successful, Constantinople must treat the Church of Greece as an equal partner, not just as another autonomous Church of the Patriarchate.

Written in cooperation with Pentapostagma.gr

NOTE: The views expressed in this article are solely those of the author and do not represent those of the Lithuanian Tribune or its staff.