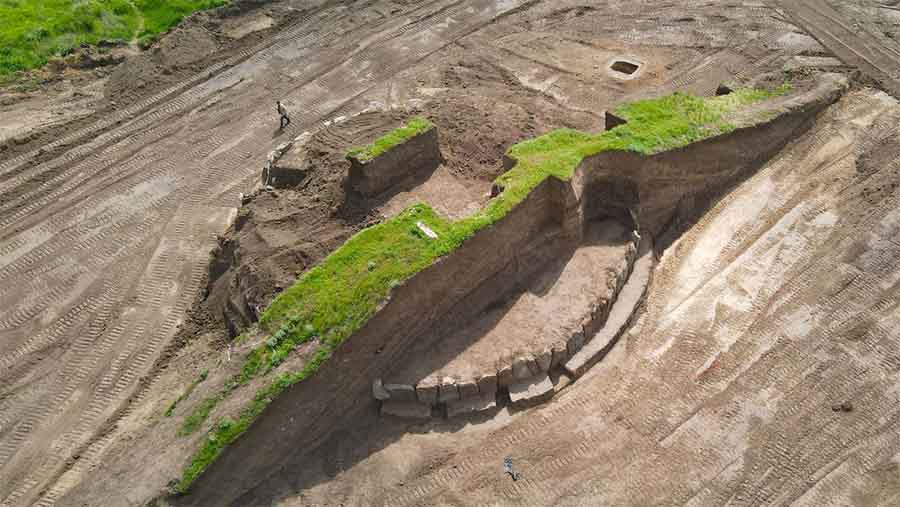 The Scythians and other warring cultures and the archaeological remains of their history are under attack by Ukrainian developers who seek to build new luxury country houses. There are two roadblocks in their pursuit of unrestricted profit. The first is in the form of tumulus 4000 to 5500 years old, numbering nearly 100,000 and scattered across the countryside, which are protected only by a very fine topsoil.

â€œIt has a very thin topsoil, literally 10 cm. It is very little and it causes it to swell, deteriorate, etc. That is why it was decided to investigate it, “explains Dmitry Teslenko, head of the Dnieper archaeological expedition of the Ukrainian Archaeological Guard Service.

A unique Ukrainian burial mound found during roadworks in the village of Novooleksandrivka. (Informant)

The second dam to the construction project is the non-governmental preservation group Guardians of the Mounds, founded in 2019 under the auspices of Oleksandr Klykavka, which has grown into a national movement in the past 20 months. In the village of Novooleksandrivka, 10 kilometers (6.21 miles) south of the town of Dnipro, in east-central Ukraine, “excavations of a kurgan or burial mounds have been in progress for more than a month and a half â€reports Archeology news network .

The tumuli and their justification

These are burial mounds that have attracted grave robbers and archaeologists in equal measure, with a variety of artifacts – which includes combs and dishes, but also piles of gold jewelry, according to NY Times . The dimensions of the single kurgan are amazing, 120 x 80 m (393.70 x 262.47 ft) and 7 m (22.97 ft) in height! Proper road clearing and construction equipment had to be used to conduct a field survey of this unimaginable scale, including bulldozers. Excavations have revealed 24 graves from the Bronze Age, Scythians (Iron Age) and the Middle Ages.

â€œDue to their nomadic nature, people only carried the bare essentials. However, we sometimes find interesting finds: pots, collars made of wolf or dog canids. For example, a burial has now been discovered where dog toe bones lay next to human remains. A triple tomb was also found where the skeleton of a man lay in the middle and the skeletons of a woman and a child were pressed against him on either side. “, says Teslenko.

â€œThe central part is currently being explored. There is a lot of manual labor. We also use machines. But I want to clarify that all machines work only under the supervision of archaeologists. The bulldozer removes several centimeters of the soil layer and if we see that something is wrong, the work stops, â€says field archaeologist Yaroslav Yaroshenko.

Several historians postulate that the burial mounds served a purpose that went beyond simple religious rites. The nobles were sent to the afterlife with the luxury and status they enjoyed when they were alive, with â€œwomen, servants and horses sacrificedâ€.

There are other interpretations of the mounds as well, keeping in mind the topography of the Ukrainian countryside and lands, and the ever-looming threat of a Russian invasion. The mounds may have been erected as a show of strength and defiance against the enemy, most certainly the Russians, to deter their advance into lands that were not theirs.

The Cromlech – A Ukrainian Stonehenge?

The mound has been dated to 5,500 years ago, coinciding with the Eneolithic period (the period of transition from the Neolithic to the Bronze Age, 2500-2000 BC). In the middle of the mound, the “Dnipro Stonehenge” was found – a series of stone blocks (like megaliths) forming a circle 18 m (59.06 ft) in diameter, called a “cromlech”. According to the archaeologist:

“As for the stone circle, it should be noted that above all it had a purely structural function. The cromlech is an integral part of a massive and complex structure. The structure consisted of a stone circle arranged vertically. There was a truncated cone at the top of the circle. This provided support for the ground and prevented the mound from spreading outward. Mounds could then have other symbolic meanings. For example, one of the most famous cromlechs in the world , Stonehenge, has repeatedly been interpreted as a druid shrine or astronomical observatory. It should also be noted that the oldest burials on the Novoalexandrovsky mound date from around 3,500 BC This potentially suggests that the cromlech near the Dnieper is older than Stonehenge.

The stone circle discovered in the Ukrainian tumulus. (Archidnipro)

The challenge of the Ukrainian tumuli and a precise historical reconstruction

Ukraine is coming to terms with its illustrious past, even as the Russian threat is constantly on the horizon. In this environment, a development of fascinating scientific techniques provides many answers to the ancient history of Ukraine, including DNA taken from the inhabitants of the mounds. It is imperative to preserve this history by studying it first, rather than destroying it for housing.

As it stands, these mounds have been repeatedly looted and stripped of their valuables, making reconstruction of the past even more difficult. These mounds were also reused, with new bodies dumped into older structures to reduce labor costs and effort, while still enjoying the splendor of royal burials.

For example, one of the Dnipro mounds “dates from prehistoric Indo-Iranian culture”, but contains a coffin dating from the 4th century BC. Another addition to this mound is a coffin emblazoned with a red star, possibly a local Communist Party leader. A Scythian mound also witnessed a mass burial of deceased WWII soldiers, with the Soviet government building a monument at the top.

â€œThe exploration of the mound is not yet complete. The best is yet to come, â€says Teslenko. â€œIn about a week, we will completely clean up the cromlech and the space inside, allowing the old structure to be seen in a practically pristine condition. It is estimated that in just ten days we will reach the most burial places. older inside the stone ring, weather permitting, “Teslenko adds.” It is certainly inevitable that the individual buried and protected by the cromlech was highly respected by this society. This is the only way to explain the monumental character of the construction. ”

Top image: Excavation of a unique Ukrainian burial mound found during roadworks in the village of Novooleksandrivka. Source: Archidnipro

in progress in the Greek-American community | archives, community, events