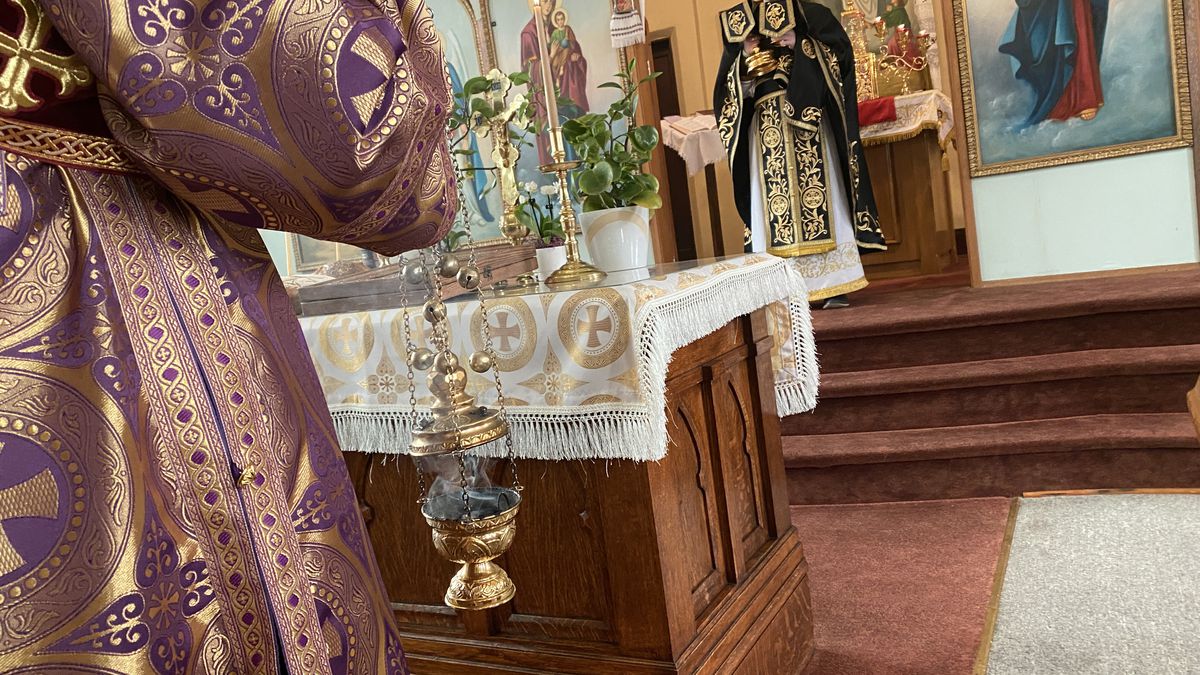 A handful of people stood among the wooden pews with their heads bowed in prayer Saturday at Saint John the Baptist Ukrainian Orthodox Church in Portland. Divine Liturgy is always a silent worship service, but this weekend felt particularly powerful and intimate, as members of the congregation prayed for those killed in the ongoing invasion of Ukraine by Russia.

“For our house in Ukraine, and for all its people, let us pray to the Lord,” Fr. Volodymyr Yavorskyi sang in a low, rhythmic voice from the church sanctuary, oscillating between English and Ukrainian. He swung a golden censer which released incense smoke as a small choir sang hymns nearby.

Yavorskyi left western Ukraine for the United States eight years ago as part of a training program for Orthodox priests. He left his family behind.

“Everyone: brother, two sisters, cousin, parents, friends,” he said. “Everyone.”

He said most of the 160 church members had someone in Ukraine and were devastated to be so far away from loved ones who are in danger.

Yavorskyi spoke quickly as he ran through his thoughts on the Russian invasion and what more could be done to stop it. He said he wanted the United States and European countries to be more aggressive, for example by supplying more weapons to the Ukrainian government. In his eyes, it is not only Ukraine that is in danger.

“Ukrainian soldiers, they are not just fighting for Ukraine: they are fighting for the whole world,” he said. “They fight for everyone civilized. The world that wants to live in freedom, not in a dictatorship.

Downstairs in the church basement, volunteers boiled pierogies in slow cookers to sell to visitors. They do it every weekend, but Saturday was busier than usual. They sold cabbage rolls in the first hour. Many customers were new and had heard of selling through word of mouth.

“It’s just the right thing to do,” said Kyla Yonetani, who bought a tray of pierogies.

Although Yonetani and her husband are not Ukrainians, they have visited the country frequently and feel a strong connection with it. They showed up dressed in blue and gold, the colors of the Ukrainian flag.

A few regulars also stopped there, including Bogdan Liski. His Ukrainian mother and grandmother made pierogies at their home in Bosnia.

There is not much data showing how many people immigrated to Oregon from Eastern European countries. Portland State University researchers in 2014 estimated that about 22,000 people from Slavic countries lived in Multnomah County in 2011.

Tatiana Terdal, organizer and board member of the Ukrainian American Cultural Association of Oregon and Southwest Washington, discourages grouping people from so many different countries under one generic label.

“We are trying to tell the county: No, we are Ukrainians,” Terdal said. “We have our own culture and our own language. And we have a big Ukrainian community here.

Days after hearing about the Russian invasion of Ukraine, hundreds of Ukrainians and supporters protested the war in downtown Portland.

Yuri Boyechko was among them. He left Ukraine for the United States as a religious refugee in the late 1990s.

“I couldn’t believe it,” he said of the moment he heard about the invasion. “We knew something was going to happen. All our history, we are persecuted by Russia. But we could not imagine that it would be so. »

Also among the crowd was a couple who moved to Portland from the Ukrainian capital, Kyiv, a month ago. Andrii Kepko and his wife, Yana Nimanchuk, came to Oregon for his job as a software engineer.

“We try to settle here, trying to live a normal life, then we hear that war has broken out,” Kepko said.

The invasion took place in the middle of the night. Kepko said he and Nimanchuk desperately tried to warn loved ones.

“We immediately tried to call and wake everyone up as some of our friends and family woke up after the explosions,” he said. “Because there were missiles falling on Kiev.”

Kepko and Nimanchuk do not feel lucky to have been able to leave Ukraine before war broke out.