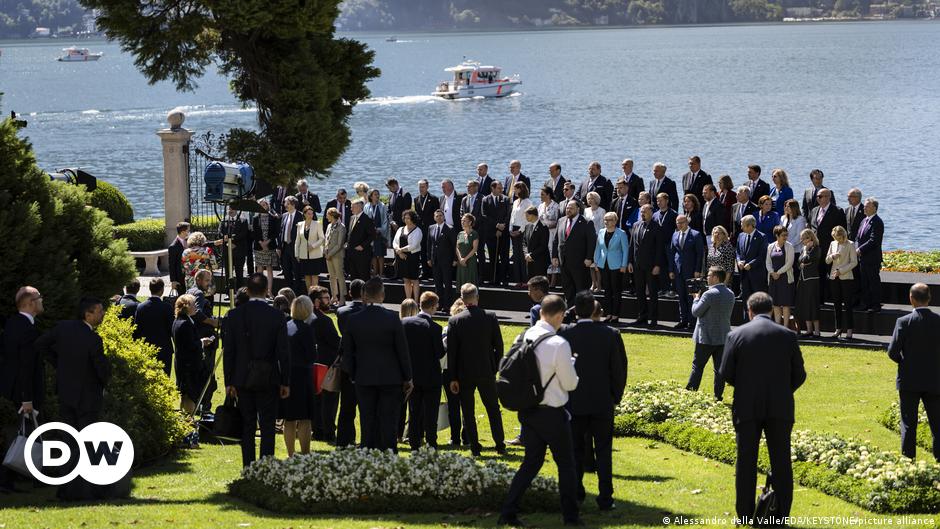 The article was last updated at 10:13 UTC/GMT

Representatives of more than 40 countries as well as multilateral organizations such as the European Investment Bank and the Organization for Economic Co-operation and Development (OECD) signed the Lugano Declaration outlining a roadmap for the recovery of the Ukraine.

The aim of the declaration is to provide Ukraine with political, financial and technical support. Part of the document known as the Lugano Principles will guide reconstruction, which Kyiv currently pegs at around 750 billion euros ($773 billion), and also includes a plan for domestic reforms in Ukraine.

The statement follows a two-day conference in the Swiss city focused on the country’s recovery.

Svenja Schulze, Germany’s development minister, told German news agency DPA that Ukraine’s recovery effort ‘is not a project for a year or two’, at an international donor conference in Lugano, Switzerland. Schulze also noted the opportunity the task presents for German industries.

The two-day summit in the Swiss Alps ends later Tuesday.

An FSB official will lead the Kherson region after the occupation

Sergei Yeliseyev, the deputy head of Russia’s Kaliningrad region, “became the head of government in the Kherson region.” The news was announced by Vladimir Saldo, the head of the Russian occupation administration.

Yeliseyev, 51, graduated from the FSB Academy and served in the FSB in unknown roles. Alexei Kovalev, a former Ukrainian lawmaker who joined the Russian side in the conflict and faced an assassination attempt last month, was appointed Yeliseyev’s deputy in the Kherson region.

In recent weeks, the Moscow occupation forces in Kherson have faced repeated attacks. Kherson is located near Crimea and was the first major city to fall after the Russian invasion.

The two countries’ attempt to join the military alliance comes after Russia’s decision to invade Ukraine despite decades of official neutrality, including during the Cold War, and years of official work and exercise with the NATO, although they are not covered by the mutual defense pact known as Article 5.

Ukrainian President Volodymyr Zelenskyy said his country now faces an invasion by Russian forces due to the fact that Ukraine is not covered by Article 5 protections and has not been allowed to join NATO, despite years of wishing the door to membership would be open. .

Once the 30 ambassadors and permanent representatives of the North Atlantic Council have approved Finland and Sweden’s application for membership, the member states’ legislatures must also formally approve this decision.

According to Image and Suddeutsche Zeitung newspapers in Germany, citing unnamed sources in the Ukrainian presidential office, Ambassador Andriy Melnyk is about to leave the embassy in Berlin to take up another post in the Foreign Ministry in Kyiv.

Image indicated that the change could take place during the summer months, but also quoted a government official as saying that this should not be understood as his reminder, but rather as recognition of his work.

Melnyk has been a prominent voice in German media debate since the outbreak of the conflict in late February. His impassioned pleas for more assistance, particularly in the form of arms exports from Germany, repeatedly made headlines.

The government in Berlin has since gone against many of its long-standing foreign policy principles to provide more weapons, including heavy weapons, to a hot conflict than it usually would.

However, Melnyk’s often outspoken tone has occasionally sparked controversy, as have some isolated comments. More recently, his defense of Ukrainian nationalist World War II leader Stepan Bandera has drawn criticism from the Polish and Israeli governments, as well as the German government official tasked with combating anti-Semitism.

Bandera is a controversial figure, closely linked to Western Ukrainian nationalist efforts to break free from the control of the Soviet Union and/or Poland, and revered in parts of Ukraine. He is also accused of complicity with Nazi Germany and of having thus contributed to facilitating the massacres of Jewish and Polish citizens.

Ukraine regroups its defenses in the Donbass

“There have been no significant changes on the battlefield over the past 24 hours,” Zelenskyy said.

“The Ukrainian Armed Forces are reacting, repelling and destroying the offensive potential of the occupiers day after day. We have to break them. This is a difficult task. It takes time and superhuman effort. But we have no alternative” , did he declare. .

Earlier, the Ukrainian General Staff said the focus of the fighting had shifted further west into Donetsk province from neighboring Luhansk province, which is effectively under Russian control following Ukraine’s withdrawal from Lysychansk.

Russian forces are now focusing on the push towards the towns of Siversk, Feroivka and Bakhmut in the Donetsk region, the general staff said.

Serhiy Gaidai, the Ukrainian governor of Luhansk, said Ukrainian forces were now focused on maintaining a defensive line from their Sloviansk stronghold to Bakhmut, about 45 kilometers to the south.

Russia has also stepped up its shelling of Sloviansk and the nearby town of Kramatorsk.

Ukrainian President Volodymyr Zelenskyy said he was in talks with Turkey and the United Nations on obtaining guarantees for grain exports.

Turkey stopped a Russian-flagged freighter off its Black Sea coast and was investigating a Ukrainian allegation that it was carrying stolen grain.

Ukraine’s General Staff said it expects Russian forces to focus on the city of Sloviansk in the Donetsk region after the capture of Lysychansk. Click here for all updates as of Monday .