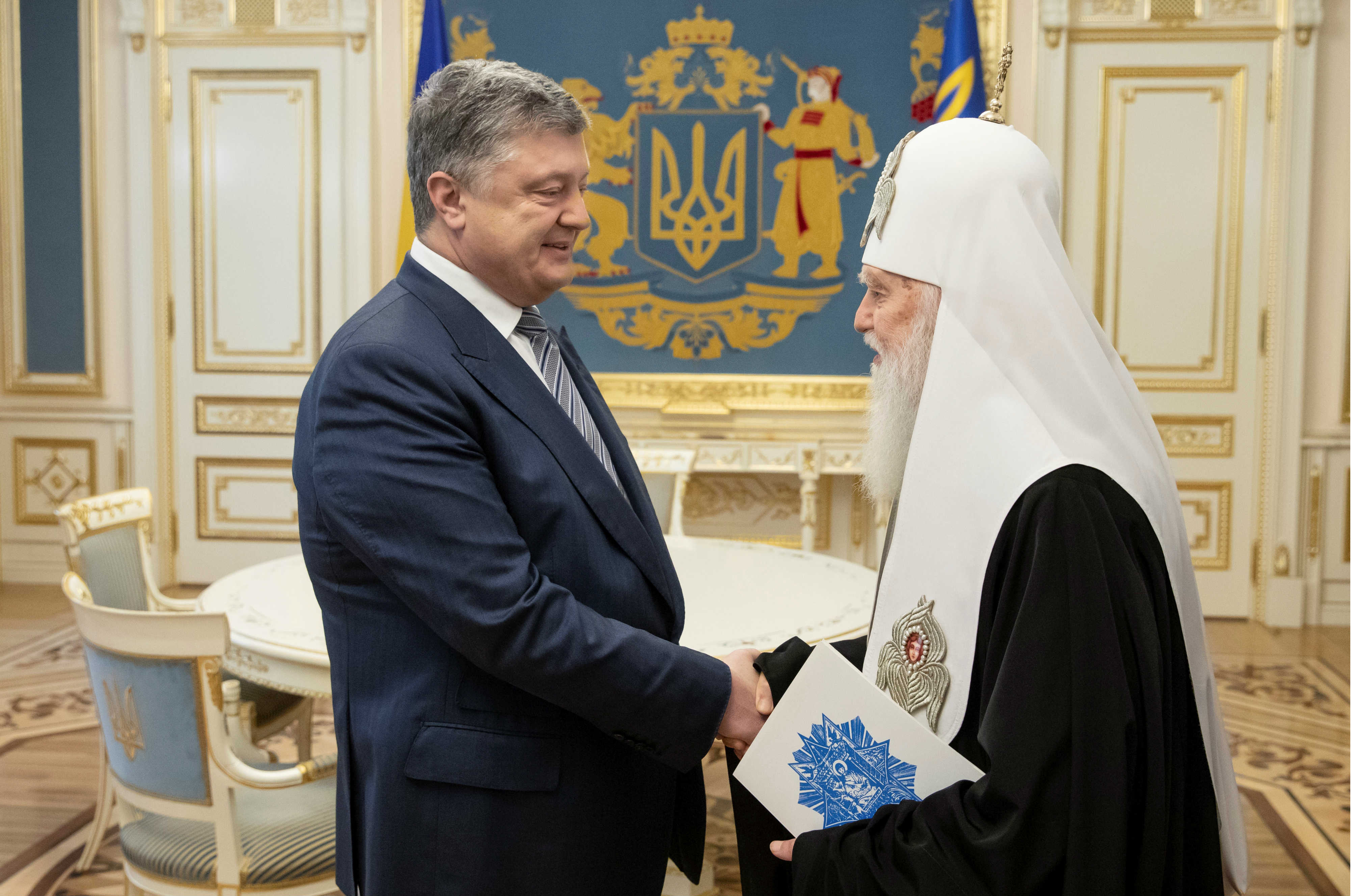 Ukraine could have its own church, but not as fast as Poroshenko thinks

During an official state visit to Istanbul, Poroshenko met with Patriarch Bartholomew on April 17. The two leaders held seven hours of closed-door discussions before the president announced that “Ukraine is closer than ever to the emergence of its own Unified Orthodox Church.” Poroshenko refused to disclose details of the agreements he made with the Ecumenical Patriarch. Opposition MPs say Poroshenko’s efforts are a farce designed to help the president’s party in next year’s election. Although electoral politics may have influenced the exact timing of the talks in Istanbul, they represent the culmination of many years of efforts to have the Kyiv Patriarchate recognized. Two hundred and sixty-eight parliamentarians voted in favor of Poroshenko’s efforts, far more than the 132 members of the presidential party.

Ukrainian nationalists have been trying to establish an autocephalous church since 1992, when Patriarch Filaret broke with the Moscow Patriarchate and created his own congregation, the Ukrainian Orthodox Church-Kyiv Patriarchate. The Moscow church banned Patriarch Filaret, excommunicated him, and ultimately declared him anathema for his action. For nationalists, however, it is a matter of politics, not theology. “Unity is our main weapon in the fight against the Russian aggressor,” Poroshenko told parliament. â€œThis question goes far beyond the clergyman. This is our final acquisition of independence from Moscow.

Poroshenko stressed that the Kremlin regards the Moscow Patriarchate as “one of the main tools of influence on Ukraine”. Her thoughts are echoed by Archbishop Zoria Yevstratiy of the Kyiv Patriarchate, who said the differences were not about faith. “Moscow is using its influence over Ukraine in the church as an instrument of hybrid warfare against Ukraine,” said the prelate.

In Ukraine itself, the Kyiv Patriarchate is clearly winning. According to the Razumkov Center, among the 27.8 million Ukrainian members of Orthodox churches, allegiance to the Kyiv Patriarchate fell from 12% in 2000 to 25% in 2016. Much of the growth came from believers who previously did not associate with any of the patriarchates. . The undeclared war with Russia forced people to choose between rival churches, a choice that was not necessary until 2014.

As expected, the candidacy for independence of the Moscow Patriarchate met with strong ecclesiastical opposition from the Moscow Church. They point out that Moscow annexed the Metropolitan of Kiev in 1686, and that Ukrainian clerics are therefore under the authority of Moscow, and not of Constantinople. Ecumenical Patriarch Bartholomew therefore does not have the power to grant Ukraine independent status.

Archbishop Yevstratiy rejects these arguments. He claims that the annexation of 1686 was accomplished by force, already a violation of canon law. In a Facebook post, he wrote that the Ecumenical Patriarch unilaterally granted autocephaly to Orthodox churches in Estonia in 1996, Bulgaria in 1998, and the Czech Republic and Slovakia in 2014. Thus, â€œthe practice of granting Tomos (an official Church statement) on the autocephaly of Constantinople in the 19th and 20th centuries confirms that the Ecumenical Patriarchate alone makes this decision, without the need for prior agreements with other Churches.

What is happening between the different Orthodox communities is worth observing, as it has an impact on questions of Ukrainian sovereignty, the influence of Moscow and the ecclesiastical legitimacy of the congregations. Poroshenko’s July 28 deadline could be rushed, however.

To avoid making a decision on autocephaly, the Ecumenical Patriarch referred the issue of recognition to a study group two years ago. Without further knowledge of what happened between Patriarch Bartholomew and the President, it is impossible to say for sure whether the Patriarch made a decision. As the editorial board of the Union of Orthodox Journalists wrote, “You do not have time to count how many times a week the mass media express the thesis of the official representatives of the Kyiv Patriarchate on the” recognition the fastest â€by the Ecumenical Patriarchate. “

James J. Coyle is the author of Russia’s Border Wars and Frozen Conflicts (2017: Palgrave Macmillan) and a non-resident senior researcher at the Atlantic Council.

Will the history of the Polish Orthodox Church repeat itself in Ukraine?