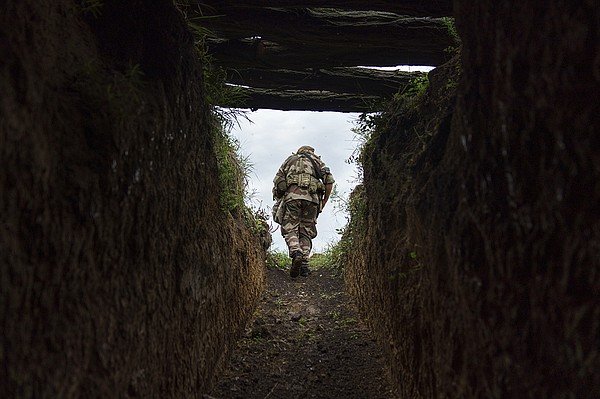 ISTANBUL — Ukraine’s presidential office said at least eight civilians were killed and 16 others injured in the latest Russian bombardment.

The eastern region of Donetsk has been facing the most intensive Russian barrage for weeks. Donetsk Governor Pavlo Kyrylenko reiterated his call for the evacuation of all residents.

“The shelling and shelling continues around the clock, and people who refuse to evacuate risk being killed on their pillows,” Kyrylenko said in televised remarks.

Russian shelling also targeted the city of Zaporizhzhia and several towns along the frontline in the region. For a second consecutive day, the Russians also bombarded the town of Nikopol which faces the nuclear power station of Zaporizhzhia on the other side of the Dnieper. Dozens of homes were damaged.

Energoatom, which operates Ukrainian nuclear power plants, said that three shells fell in the evening on the territory of the Zaporizhzhia power plant, which is the largest in Europe. No casualties or damage to the reactors were reported.

“This is an open and daring crime, an act of terror,” Ukrainian President Volodymyr Zelenskyy said in his late-night address.

The Russians also hit the southern city of Mykolaiv. Regional Governor Vitaliy Kim said Russian forces fired on the city after midday, causing extensive damage, killing an unknown number of people and injuring at least nine. He said the fire came from the direction of Kherson, the Russian-occupied city about 30 miles to the southeast.

Meanwhile, Pope Francis met with a senior Russian Orthodox Church official on Friday ahead of a meeting scheduled for next month in Kazakhstan with Russian Orthodox leader Patriarch Kirill, who has justified the war in Ukraine.

The audience was the first between Francis and the new director of the Moscow Patriarchate’s external relations office, Metropolitan Antony. He replaced the Vatican’s longtime liaison with the Russian Orthodox Church, Metropolitan Hilarion, who was transferred to Hungary after Russia invaded Ukraine on February 24.

The pope and Kirill have confirmed their presence in Kazakhstan to attend a government-organized interfaith meeting, the “Congress of Leaders of World and Traditional Religions,” on September 14-15. If they meet on the sidelines of the congress, it would be the second meeting between a pope and a Russian patriarch, after a meeting in June was canceled due to diplomatic fallout from the Russian invasion.

Kirill justified the invasion of Ukraine on spiritual and ideological grounds, calling it a “metaphysical” battle with the West. He blessed Russian soldiers in battle and invoked the idea that Russians and Ukrainians are one people.

Francis’ audience with Kirill’s envoy took place the same day the pope made a symbolically significant decision for some Ukrainian Catholics.

He said an underground Ruthenian Greek Catholic priest who ministered in Soviet-era Ukraine, Reverend Petros Oros, a martyr, accelerated him on the path to eventual sainthood. Oros lived from 1917 until 1953, when he was killed out of hatred for the faith by Soviet forces, the Vatican said in a statement.

At the time, Catholics had been persecuted and the Eparchy of Oros suppressed. The Vatican noted that Oros was pressured to transfer to the Russian Orthodox Church but “resisted, remaining loyal to the pope.”

Under Vatican rules for martyrs, Oros can now be beatified — the first step toward eventual sainthood — without having to have a miracle attributed to his intercession. Canonization requires a miracle.

Information for this article was provided by Zeynep Bilginsoy, Aya Batrawy and Nicole Winfield of The Associated Press.