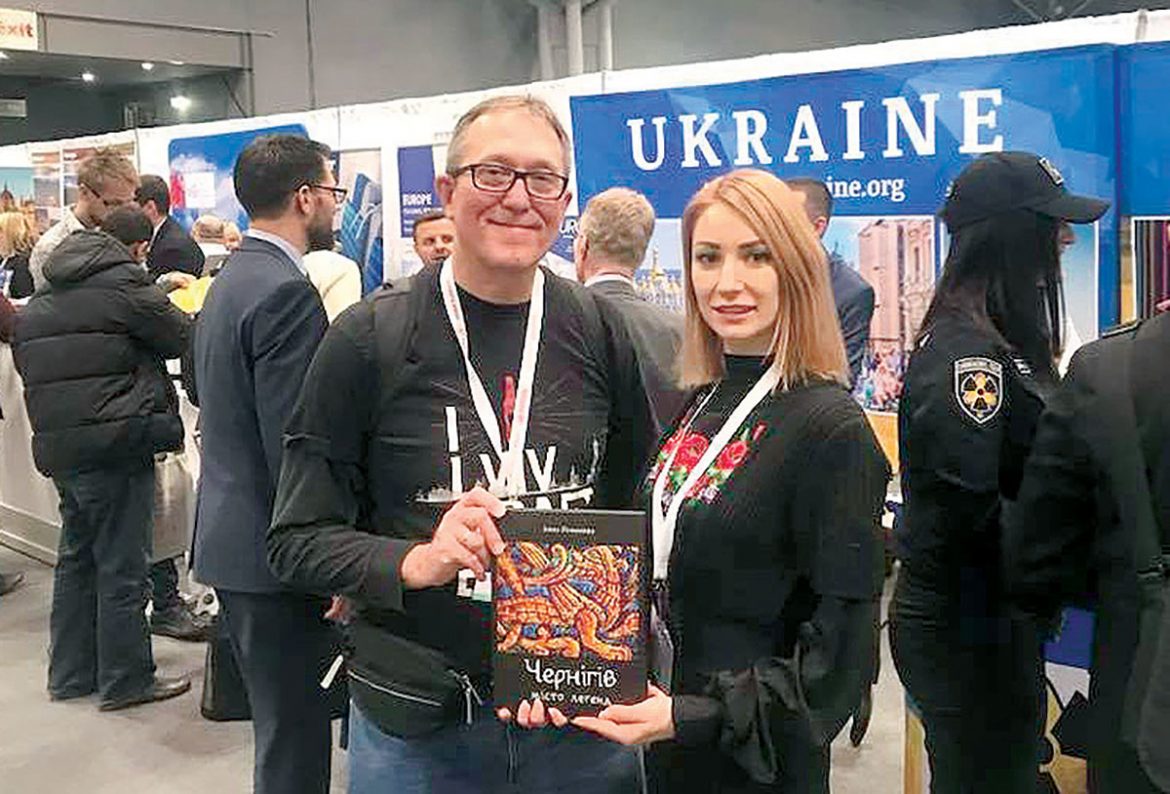 WASHINGTON – In 2020, the Ukrainian government plans to devote 240 million hrv (approximately US $ 10 million) to developing Ukraine’s tourism potential, an increase of more than ten times over current spending levels. A new tourism development agency will lead the effort.

In addition, the national budget includes 500 million HRV ($ 21 million) for a youth mobility program – a new initiative promoting educational trips for schoolchildren within the country.

Many Ukrainian decision-makers and professionals in the travel industry are encouraged by the new national focus on this sector, among them Dmytro Naliotov, chairman of the Verkhovna Rada subcommittee on tourism. In an interview with the Zruchno.Travel website, summarizing the results of a tourism conference in Kiev organized by the European Bank for Reconstruction and Development, he said: â€œWe have reached the stage where we need to ‘a restart. Currently, I see all the conditions for this, given how much the President and the Prime Minister talk about tourism and given the record budget for the development of tourism potential in 2020. “

How to best use this influx of funding? And what should be the priorities of the State Agency for Tourism Development which is being formed in conjunction with the huge funding increases? Until now, Ukraine has lacked a cohesive national narrative and approach, and each city has taken responsibility for promoting itself and promoting its attractions.

In an interview for this article, Mr Naliotov’s predecessor in the parliamentary subcommittee, former national deputy Anna Romanova, said that the agency’s mission should first and foremost be to strategize and provide guidance and coordination:

“I think the first step is a matter of strategy, and the government should create a strategy with the participation of representatives of the tourism industry, tour operators, representatives of the countries of interest to us, as well as the media.” The funding, Romanova said, should be used to hire experts and conduct surveys of tourists’ interests and spending habits. Another key issue is the promotion of travel to Ukraine through exhibitions and various entertainment and information platforms, including broadcast giants like Discovery Channel and National Geographic as well as social media advertising. The calendars of exhibitions and major events must be planned and coordinated.

Rather than seeing all foreign tourists as one audience – and having the same standard Ukraine booth at all travel fairs around the world, for example – she thinks the strategy should be to develop tourism packages. targeting five or six different priority audiences.

â€œFor example, for Canada and the United States, focus on the diaspora,â€ she advises. â€œThe diaspora is large, over a million people – but many of its members have not even been to Ukraine once. They love Ukraine, they help, they sympathize and they rejoice with us when it comes to our victories – but they haven’t come here.

Such a sightseeing package may include visits to historical sites related to Taras Shevchenko, Ukrainian cooking classes, or learning about Hutsul culture, Ms. Romanova explains. (North American readers know this is something some tour groups have been doing for years, but perhaps not on the large scale that the former Samopomich party lawmaker envisions.

Besides Canada and the United States, Romanova says Ukraine should probably try to attract tourists from China, Poland, Germany and Israel. Chinese tourists are a much sought-after group, thanks to the large sums they spend on travel to Europe. Polish tourists wish to visit historical sites in Ukraine dating back to the Rzeczpospolita era, with guides discussing the achievements and contributions of the Poles who lived in these lands. German tourists are known to flock to Ukraine for championship football matches. Many citizens of Israel have roots in Ukraine.

One particularly unique destination in Ukraine is Chernobyl – site of the world’s worst nuclear disaster – made even more popular by the award-winning HBO series. When she went there for an excursion, Ms Romanova says she met a retired couple from Texas who said the tour was interesting to them because “we remember when we were young and it was the cold war and we remember how we heard about it on the other side of the ocean. And now we are here. Chernobyl is for us a museum of the cold war, a museum of that time. Like stepping back in time 35 years ago – and it’s very interesting.

And another promising sector is medical tourism, based on already popular mineral and health spas like Truskavets, as well as relatively inexpensive medical services.

However, to enable more foreign tourists to enjoy Ukraine’s great history, architecture, culture and cuisine, the country will need great improvements in its transport and other related infrastructure. tourism, she notes.

In addition to being a tourism specialist, Ms. Romanova is the author of a book about her hometown, entitled â€œChernihiv – City of Legendsâ€. The city dates back to the days of Kyivan Rus’ but, as she recounts, a few years ago, it became fully aware that its inhabitants were not very familiar with Chernihiv’s amazing past. She decided to collect stories, myths and legends about Chernihiv, illustrating them with the works of an impressive team of artists and designers.

Ms Romanova said she wanted to “raise awareness that every day people walk past buildings where remarkable people from our history have lived,” including figures like Kozak Hetmans Ivan Mazepa and Pavlo Polubotok, “so that people know that the everyday things around us are shrouded in legends, in the great lives of great people and that we are surrounded by amazing wonders.

Ms Romanova believes that the 500 million HRV budgeted for the youth mobility program – a kind of national educational travel program for Ukrainian schoolchildren – is of crucial importance:

“The [program of] the mobility of schoolchildren will fulfill three powerful objectives: First, it will unify the country. Secondly, it will educate the young generation in a national and patriotic way, making it clear how interesting Ukraine is, how multi-colored it is, how rich it is in tourism resources and how much its population is. hospitable in every corner – in the east and west, and north and south. Third is to develop the habit of travelingâ€¦ You can travel and see something new and expose yourself to new horizons. So, in any case, developing the habit of traveling is a plus for the economy and the country.

For a business perspective, this writer turned to Iryna Dudynska, executive director of Vacanture, a tour operator with offices in Ukraine and France.

His wishlist for the planned tourism development budget of HRV 240 million includes promoting Ukraine on digital platforms, participating in international travel exhibitions, inviting travel industry experts from abroad to Ukraine to share their expertise, offer English-language narratives for exhibits in Ukrainian museums, improve the appearance of decaying tourist infrastructure, and organize tours of foreign tour operators to familiarize themselves with the ‘Ukraine.

In his company’s experience, other factors influencing a person’s decision to travel to Ukraine include the availability of direct flights and their duration, as well as visa-free travel or the ease of obtaining one. a visa. Overall, Ms Dudynska stressed that it is important to think about what elements Ukraine has that give it an advantage over other countries or at least make it competitive with them. She says potential visitors ask, “Why should I choose Ukraine as my travel destination?” What unique thing will I see compared to other parts of the world? “

At the recent ‘Win with the Lion’ tourism forum in Lviv, Deputy Mayor Andriy Moskalenko reminded attendees of the huge progress Lviv has made in recent years, attracting 2.2 million tourists in 2018 – more than half coming from abroad.

As reported on the city council’s website, he said: â€œTwelve years ago we had less than 100,000 tourists. We did not have the beautiful airport that we have today, which is developing rapidly. Ploshcha Rynok was full of cars, there weren’t that many hotels and restaurants. But a synergy between government and business has developed and has given impetus to major development. Now Lviv is an example of a certain strategy. It is very important to create such a strategy at the national level.

Also speaking at the conference, Serhiy Kiral, mayor’s adviser for international cooperation, said that “for a long time tourism was not a priority for Ukraine, but this is changing”.

Ukrainians already have big slogans like â€œUkraine Now! and â€œUkraine Wow! In 2020, this branding will benefit from financial support as well as national level strategy and coordination that could truly help attract millions of additional travelers from around the world to Ukraine.

Adrian Karmazyn is a communications advisor at the US-Ukraine Foundation, which hosts a Travel to Ukraine booth at the New York Times Travel Show which is held in January each year.