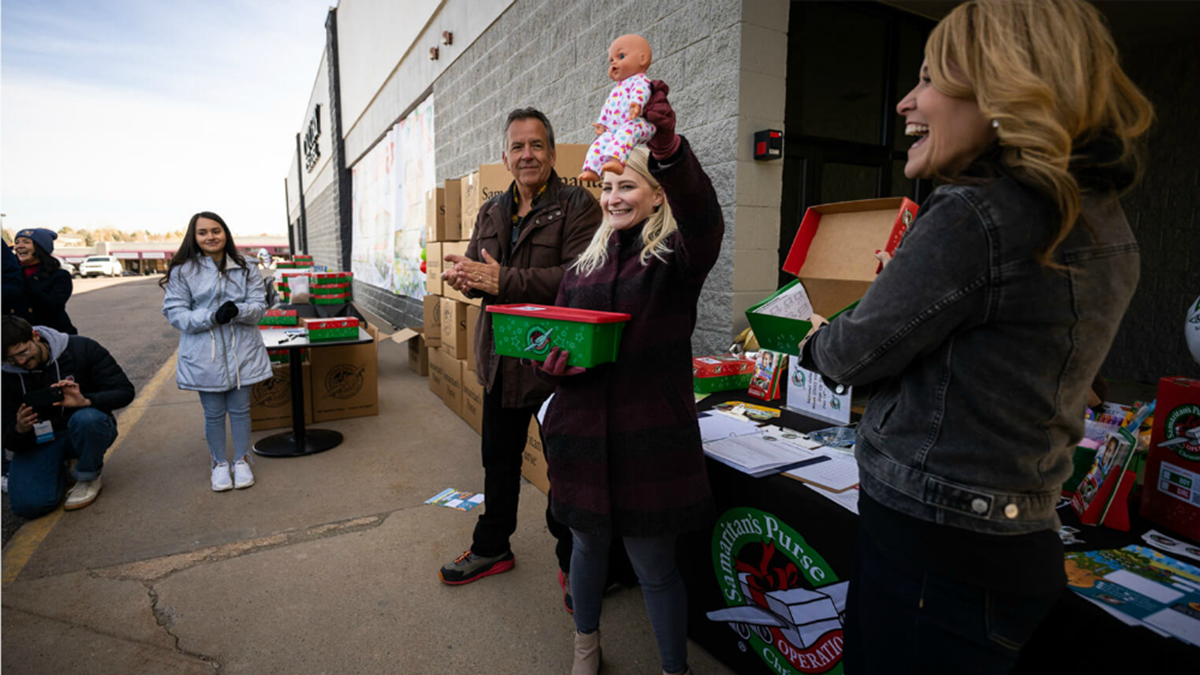 God’s love came into Elizabeth Groff’s life in the form of a yellow yo-yo packed in a shoebox.

She remembers the feeling of light, in stark contrast to the darkness that surrounded her for so much of her childhood.

At the time, she knew nothing about Samaritan’s Purse or Operation Christmas Child, which sends shoeboxes of gifts to children in need around the world. Groff was born in a small town in southern Ukraine. Both of her parents were alcoholics and her father was killed in an alcohol-related accident when she was just one year old, she said.

Her mother was unable to take proper care of her on her own, so they went to live with her grandparents. There, her mother again gave birth to a baby girl named Tanya. Their mother was rarely home, so even though she was just a child herself, Groff took on much of the responsibility of caring for her little sister.

“I had to grow up and become a householder at a very young age,” she told CT.

Her mother gave birth to a third daughter, and Groff’s burden increased.

“It was really hard for me. I was taking care of her,” Groff recalled. “I felt like I did something wrong.”

Although she was only seven years old, Groff decided at that time that she had to find a better life for her sister Tanya. She impulsively decided to run away with the four-year-old child.

“I just took her by the hand and got on the bus and we left,” she said.

They didn’t get very far, but it turned out to be the gateway to a better life for both of them.

Police spotted the two girls hanging out near the nearby town’s bus station and took them to a detention center while authorities investigated. The situation at home was so dire that the detention center seemed unbelievable to Groff.

Officials decided that she should not be in her mother’s care. Groff was, she said, officially classified as an orphan and sent to an orphanage. It was a good place that met all of her physical needs, but Groff still felt darkness around her. At the Orthodox religious services attended by the orphans, she learned of the existence of God and began to cry out to him.

“What is the purpose of my life? she begged. “Why am I here?”

She remembers the day her prayers were answered.

The director of the center where she was staying called her and a group of other children to a small room. They were told that they were going to receive gifts from people who wanted them to know how much God loved them.

“I just remember being so excited about this gift because it was the first gift I had ever received in my life,” she said.

Inside the box were coloring books and accessories for little girls, but her favorite item was a yellow yo-yo. As she held it, she thought about the idea that God loved her and she believed it. The darkness of his life was flooded with light.

“I just remember at that moment realizing I wasn’t alone,” she recalled. “A stranger somewhere in this world packed this shoebox just for me. And I realized that God has been with me all this time and He’s not going to leave me broken.

For her, the shoebox was God saying, “You are not an orphan. You are my daughter.

A few years later, Groff was adopted into an American family and from then on attempted to spread that same message of hope to others with shoeboxes, which she would learn were an initiative of Samaritan’s Purse. .

While a student at Virginia Tech, Groff led a team of fellow students to pack shoeboxes for Operation Christmas Child, an annual tradition.

Now 28, Groff lives in Texas with her husband and is the national spokesperson for Operation Christmas Child.

This year is a special year for the organization as it prepares to deliver the 200 millionth shoebox. Groff will have the opportunity to deliver this special box to a Ukrainian refugee.

“All I can say is that we serve a faithful God,” Groff said.

Edward was just a small child when Operation Christmas Child started, but he remembers coming downstairs and helping to process the shoeboxes.

He saw it grow from 11,000 delivered in Bosnia in the first year of Operation Christmas Child in 1993 to 11 million expected this year, delivered worldwide. Samaritan’s Purse has delivered the gifts to children in 170 countries.

“Making a child smile and have joy is a wonderful thing,” he told Christianity Today. “For many of them, this is the first gift they have ever received.”

But despite the joy the gifts bring, Graham believes most important is the chance to share God’s love through the gospel message.

Over time, Samaritan’s Purse has also seen the Christmas gift program open doors for humanitarian work. When Russia invaded Ukraine in the spring, for example, Samaritan’s Purse had contacts in the country dating back to delivering shoeboxes in 1996. This gave them a starting point to start the conversation about helping people in need.

Graham, who spent 16 years in the US military, thinks it’s fitting that that 200 millionth shoebox should go to a Ukrainian child.

“There has been so much destruction, there has been so much suffering and turmoil, especially to the detriment of children,” he said. “I’ve spent years in combat and I’ve seen what happens to children in war and conflict and it’s horrible and it’s ugly. No child should go through this. There are so many children who have been displaced or who have lost loved ones.

Graham hopes that through shoeboxes, Samaritan’s Purse can bring God’s love and hope to these children.

“The Samaritan’s Purse goes into the ditches of the world, just like the Good Samaritan,” he said.

He doesn’t believe that God wants them to pass these children by without doing anything.

“Where other people may not have the resources, the ability to go, or the network to go and serve in Ukraine, God has given it to us,” Graham said. “I think he wants us to go over there and deliver that 200 millionth shoebox.”

Groff, for her part, is thrilled to be a part of it all.

“To be able to receive one and now be able to give one to a Ukrainian child who has been affected is an incredible opportunity and I am so grateful.”

Samaritan’s Purse collects shoeboxes November 14-21. Locations and information on how to donate are available at samaritanspurse.org.

World War III after the missile strike in Poland? What action can NATO take “against Russia”