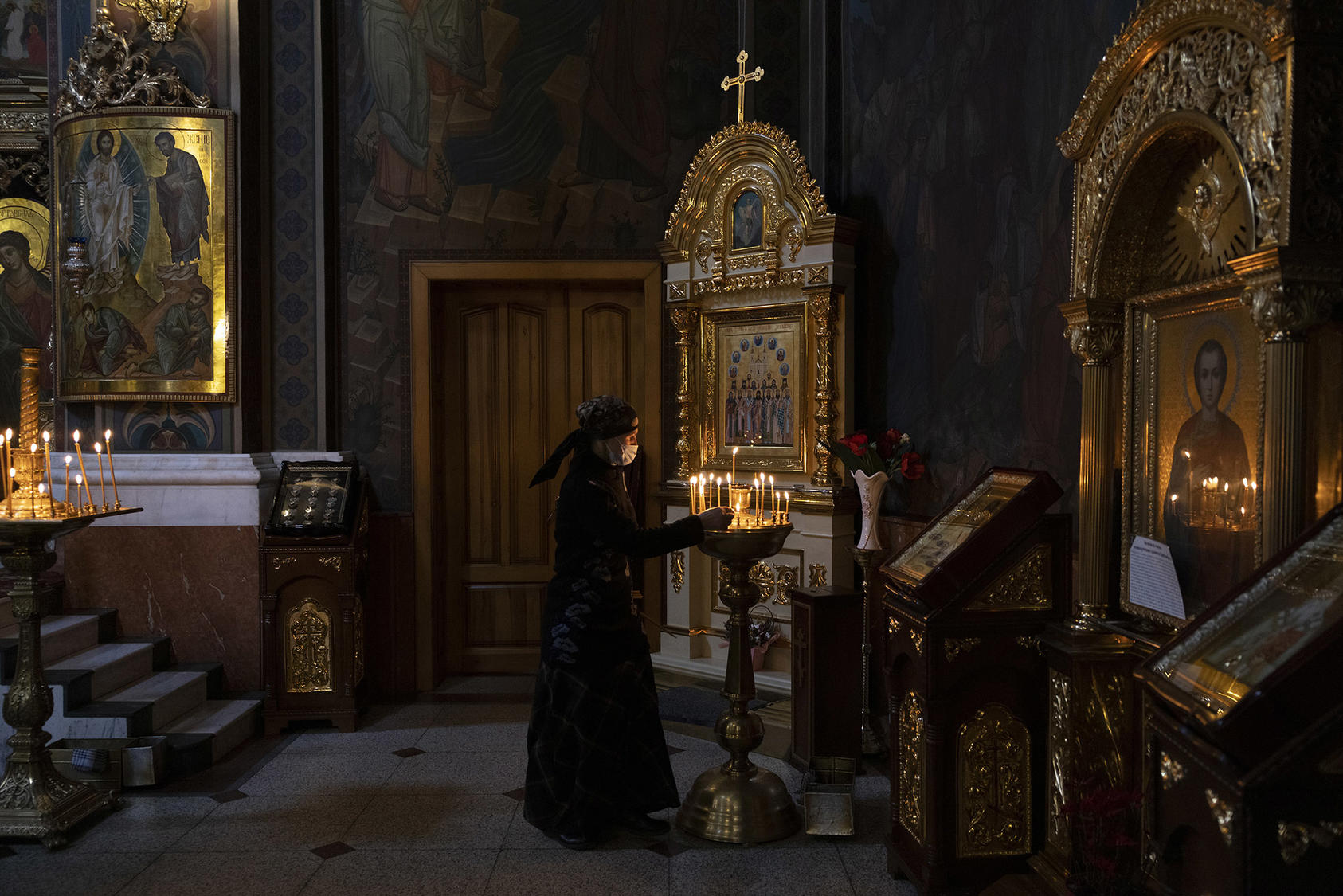 The Role of Religion in Russia’s War on Ukraine

In his sermon, Patriarch Cyril portrayed the war in purely spiritual terms: “We have entered into a struggle which has not a physical meaning, but a metaphysical meaning”. He described the war as a struggle “for eternal salvation” for ethnic Russians.

A trusted adviser to President Vladimir Putin, Patriarch Kirill’s remarks differ significantly from those of other international religious leaders. The Orthodox Ecumenical Patriarch of Constantinople Bartholomew I openly condemned the war in an interview with Turkish media, saying that “the whole world is against Russia”. And before a crowd in St. Peter’s Square at the Vatican, Pope Francis pleaded: “In the name of God, I ask you: stop this massacre”, calling the invasion an act of “unacceptable armed aggression”.

Across Ukraine and within the Ukrainian diaspora, leaders of the Ukrainian Orthodox Church have risen to issue strong condemnations of the Russian invasion. It is clear that, in a certain sense, Patriarch Kirill is right: the conflict in Ukraine is not only a matter of horrific violence, but also a conflict with deep-rooted religious significance.

The role of religion in Ukrainian identity

In President Putin’s lengthy speech preceding the invasion, he alluded to the religious narratives underlying the battle over Ukrainian national identity. Putin claimed that Ukraine is “an inalienable part of our own history, culture and spiritual space”.

Putin’s assertion reflects a commonly accepted interpretation of the history of Orthodox Christianity in Russia. According to this view, Russians and Ukrainians are one people originating from the same Christian kingdom that arose in the 10th century. According to the national histories of both countries, Prince Volodymyr I of Kyiv accepted Christianity in 988 and established a pious kingdom which became the predecessor of the modern states of Ukraine and Russia.

This fact is not disputed. But Ukrainians dispute claims like the one made by Patriarch Kirill in a letter to the World Council of Churches, where he said that Ukrainians and Russians “come from a baptismal font in kyiv…and share a common historical destiny.”

According to most Ukrainians, Putin’s and Kirill’s claims ignore a long history of Ukrainian independence that is fundamental to their national identity.

It also ignores the fact that Ukraine’s religious landscape is far more diverse than is generally thought. While nearly 80% of Ukrainians profess to belong to an Orthodox faith, some 10% of the population – particularly in western Ukraine – belong to the Ukrainian Greek Catholic Church. Muslims, mostly of Crimean Tatar descent, make up around one percent of Ukraine’s population, along with a historically large Jewish community numbering around 200,000 and small groups of Protestant Christians.

Ukraine as a religious battleground

When Constantinople fell to the invading Ottomans in the 15th century, the Orthodox Church of Moscow asserted itself as heir to the only remaining “true” Christian church in the world, placing the Orthodox parishes of Ukraine under its full jurisdiction. .

But in the centuries since, Ukraine has become a battleground for orthodox power struggles that stem from this original claim to Russian authority. After the collapse of the Soviet Union and Ukraine’s declaration of independence, some voices began to advocate for an independent Ukrainian Orthodox Church. At the time, these cries had not been heard.

Then, in the aftermath of the Euromaidan revolution in Kyiv in 2014, the same conversation resurfaced. Patriarch Filaret of Kyiv asked the Russian Orthodox Church to grant autocephaly to Ukraine – but this was refused. In an act of defiance, he chose to found an independent Orthodox Church of Ukraine without Moscow’s consent and began asking parishes across the country to switch allegiance. Moscow responded by excommunicating Filaret and appointing its own Patriarch of Ukraine based in the eastern city of Kharkiv.

In 2018, then Ukrainian President Petro Poroshenko realized the political significance of this divide between the churches. He orchestrated a petition to Ecumenical Patriarch Bartholomew I, reigniting centuries-old struggles between Moscow and Constantinople for supreme authority over world Orthodoxy. Bartholomew endorsed the request for autocephaly in Ukraine, giving his blessing to the establishment of an independent Orthodox Church of Ukraine. As a result, the Russian Orthodox Church broke communion with the Ecumenical Patriarchate.

The invasion weakens the authority of the Moscow Patriarchate

Even so, the Moscow Patriarchate remains the most common affiliation of Orthodox parishes in Ukraine, with approximately 11,000 parishes compared to the 7,000 of the Independent Orthodox Church of Ukraine. As such, the Moscow Patriarchates functioned as an important mechanism for exercising Russian power in the country in the years leading up to the current invasion.

But the invasion quickly undermined the position of the Moscow Patriarchate in just a few weeks. Parishes all over Ukraine began omitting Patriarch Kirill’s name from the liturgy from the day of the invasion. And the priests chose to wave Ukrainian flags and deliver sermons condemning Russia’s violence in all parts of the country.

Some Russian Orthodox Churches in Europe have announced that they are cutting ties with the Moscow Patriarchate. Even Metropolitan Onufry, head of the Moscow Patriarchate in Ukraine, called on Putin to “an immediate end to the fratricidal war” and accused him of “repeating the sin of Cain, who killed his own brother out of envy”. The position of the Russian Orthodox Church in Ukraine today is wavering due to prolonged Russian violence.

Meanwhile, as the war rages on, civilians have taken refuge in churches as international law prohibits attacks on religious sites. But buildings of Orthodox churches and other religion-related sites are suffering direct damage across Ukraine. On March 1, a Russian missile hit Kyiv near the site of the Babyn Yar massacre in 1941, where an estimated 33,000 Jews were killed by Nazi forces in two days. Then, on March 13, a revered 16th-century monastery in Donetsk was hit by artillery blasts, leaving it damaged by repeated shelling. The buildings were occupied by refugees and monks at the time of the attacks, some of whom were injured.

Incidents like these call into question the future of the Orthodox religion in Ukraine. If Ukraine ultimately succeeds in repelling the Russian forces, the future of a Russian patriarchy looks murky. However, if Ukraine falls to Russian occupiers, the Independent Orthodox Church of Ukraine will likely face similar uncertainty. The role of religious actors in maintaining solidarity across ecumenical lines is therefore crucial to preserving the social fabric of a unified Ukraine – and will be a key factor in building peace if and when the guns fall silent.

Aidan Houston is a research assistant with USIP’s Religion and Inclusive Societies team.