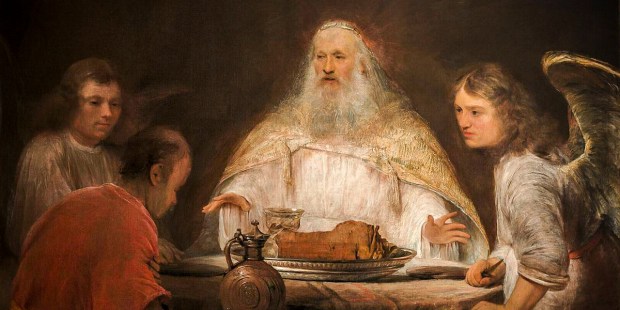 To say that hospitality is at the very heart of Scripture is no exaggeration.

Saint Benedict of Nursia is usually seen the father of Western monasticism. This does not mean that he was the first Christian monk. This title often goes to Antoine le Grand, credited with having launched the tradition. The monastic and eremitic Christian life was born in the Egyptian desert at least two centuries before Benedict, around the year 270. While it was Paul of Thebes who first ventured into the desert, it was Antony who made it happen. Those who followed soon formed a sort of alternative Christian society – the famous â€œdesert fathersâ€. One of these Fathers, Saint Pachomius, organized the first Christian monastic communities under the authority of a figure known as the â€œabbotâ€. – a word derived from the Aramaic “abba”, father.

It means the famous BenoÃ®t Regula is not the first monastic rule. Saint Basil of Caesarea Asketica â€”A manual of ethics for organizing life in the cloister, still in use today in the Eastern Orthodox Church â€” is considered the first of its kind. But the first Pachomius already had one. However, this is not necessarily what one would expect from this kind of texts. Instead of providing the monks with detailed instructions on how to organize their daily lives, Pachomius’ rule basically consists of prayers that community members could memorize and repeat throughout the day. It is clearly inspired by the classic Pauline mandate found in 1 Thessalonians, â€œpray without ceasingâ€. (Cf. 1 Ts 5, 16-18). The famous Rule of Saint Benedict, by comparison, is definitely comprehensive. It is a whole book of precepts and instructions, organized in 73 chapters. It has been used continuously by the Benedictine months since the 6th century.

One of the most famous passages of Benedict’s rule is chapter 53. The text is relatively short but, despite its brevity, it is by far the most famous and influential part of the whole Rule. In a few lines, he sums up the great principle of the legendary Benedictine hospitality. It reads as follows:

May all the guests who arrive be received like Christ, for He will say: “I have come as a guest, and you have received me” (Mt 25:35).

It is understandable that monastic communities consider hospitality to be at the heart of their mission and identity, especially if they are in the desert or in other relatively isolated areas, where monasteries are often found –travelers wandering in these particularly remote areas could take advantage of all the help they could get. Christian charity would oblige the monks to lend a hand. This tradition is still preserved and honored today.

But hospitality is not a monastic invention. Rather, it is a deeply biblical value. One could even say that it is at the heart of Scripture. In the factssome have read the very beginning of the book of Genesis as the definitive and exemplary gesture of hospitality – God creates a whole world in which human beings can live and meet all their needs. Quite the host.

Genesis 18 echoes this gesture. It tells the story of the generous hospitality of Abraham and Sarah to three visitors who came to them through the oaks of MamrÃ©. Semi-nomadic life often brought together people from different families and regions, Canaan being part of a natural land bridge between Asia and Africa and, therefore, a popular trade route. In the absence of a formal hotel industry, which will only develop later (and reach one of its peaks with Benedictine hospitality, precisely) people living in towns, villages, small towns and even encampments had a social obligation to welcome foreigners. The text says:

The Lord appeared to Abraham near the great trees of Mamre as he sat at the entrance to his tent in the heat of the day. Abraham looked up and saw three men standing nearby. When he saw them, he hurried from the entrance of his tent to meet them and bowed to the ground. He said, â€œIf I have found favor in your eyes, my lord, do not miss your servant. Bring some water, and then you can all wash your feet and rest under that tree. Let me bring you something to eat, so that you can refresh yourself and then continue on your way, now that you have come to your servant. “Very well,” they replied, “do as you say.” So Abraham rushed into the tent to Sarah. â€œQuick,â€ he said, â€œget yourself three envelopes of the finest flour, knead it and bake bread. Then he ran to the herd and chose a calf of choice, tender and gave it to a servant, who hastened to prepare it. Then he brought curds and milk and the calf that had been prepared, and set them before them. While they ate, he stood beside them under a tree. “Where is your wife Sarah?” They asked him. “There in the tent,” he said. Then one of them said, “I will surely come back to you around this time next year, and your wife Sarah will have a son.”

Tradition understands this passage as a signifier (among many other things) that without their hospitality, Abraham and Sarah would never have had children. It is only because they receive these strangers into their home that they also receive the blessing of having Isaac. They reflected the initial of God, hospitable, literally Creative gesture.

But there is still more in the book of Genesis on this subject. After the angels received hospitality from Abraham and Sarah, the Lord told Abraham that “the outcry against Sodom and Gomorrah is so great and their sin so grave that I will come down and see if what they have done. is as serious as the outcry that has reached me. Otherwise, I will know. (Cf. Gn 18, 20). Abraham immediately asked the Lord if he would spare the city if 50 righteous were there. God agreed that he would not destroy it, for the sake of the righteous who live there. Abraham negotiates, asking God for mercy for the lower numbers: first 45, then 40, then 30, then 20, and finally at 10. The Lord accepted each time. He sent two angels (not the three we saw staying in Abraham’s tent) to be sent to Sodom to investigate.

Lot, Abraham’s nephew living in Sodom, receives these strangers. Like Abraham, he invites them to spend the night at his place, serves them, feeds them and accommodates them. Other sodomites wanted Lot to deliver them to themrather. But rather than handing over his guests, Lot instead offered them his two daughters. He was refused.

In the morning, the two angels urged him to recover his family and to flee the city that was going to be destroyed: â€œRun away for your life! Don’t look behind you, don’t stop anywhere in the plain; flee to the hills, lest you be carried away! The rest of the story, we already know. Lot’s wife disobeys, looks back, toward the city, and immediately turns into a pillar of salt.And salt has a lot to do with hospitality.

Salt plays an interesting, often contradictory role in the Bible. It was widely and variably used symbolically in ancient Israel.. The books of Numbers and 2 Chronicles present salt as the symbol which confirms the friendship between the parties. Eating salt together, in fact, was (and still is) a sign of friendship in parts of the Mediterranean.

According to tradition, Lot’s wife was herself a sodomite. This would mean that hospitality was not part of his customs. Some sources claim that when Lot asked her to bring salt to his guests, she complained, â€œAlso this bad custom you want to bring into this place? (Cf. Midrash Agadah, Bereishit 19, 32). Since they had no salt in the house, she went door to door asking the neighbors for it, letting them know that her husband had ignored the city laws: he had invited strangers. The Midrash then explains that having sinned with salt, “she was punished with salt”.

This “punishment” is indeed revealing. A land covered with salt, in the Bible, is also a metaphor for no man’s land, a desolate land, a land where nothing grows (Cf. Psalm 107: 34; Job 39: 6; Jeremiah 17: 6). Since it was hospitality that enabled Abraham and Sarah to have a son, to grow and to prosper, by the same logic those who deny hospitality (not just Lot’s wife, but the whole city of Sodom) would turn into a wasteland.