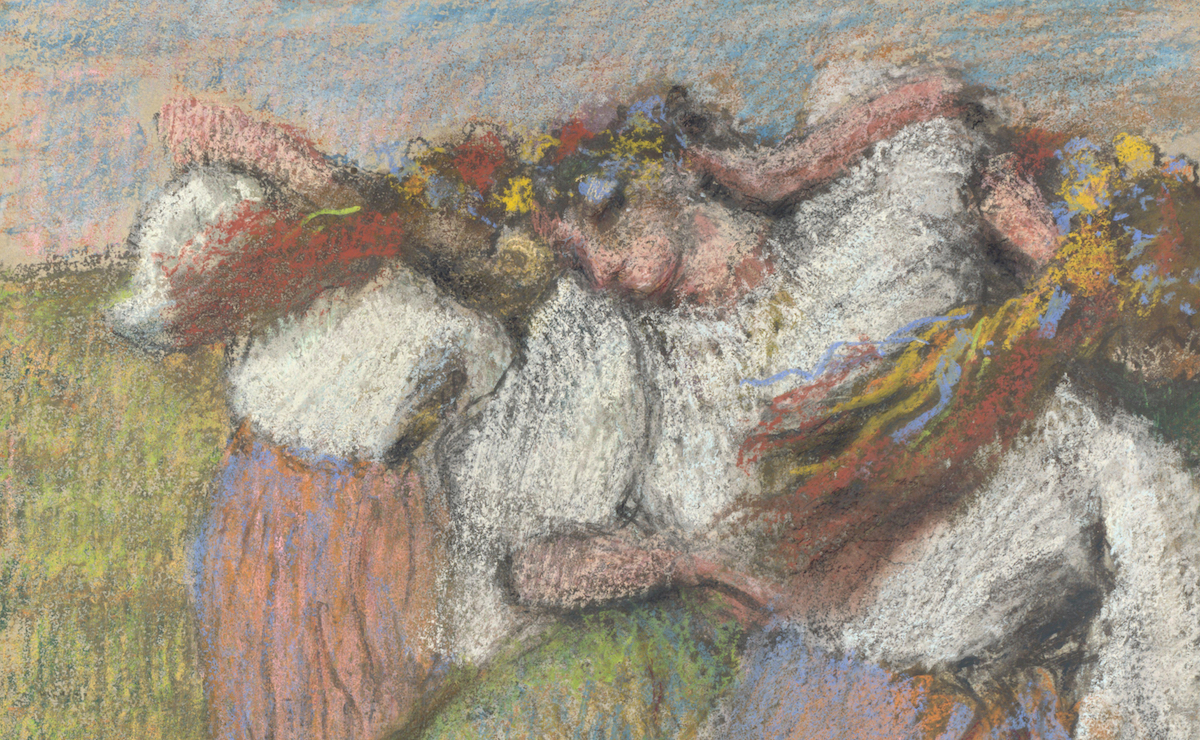 During the height of the Belle Époque in the late 1890s, dance troupes from Eastern Europe visited Paris and performed in its famous cabaret clubs: the Folies-Bergère, the Moulin Rouge and the Casino. of Paris among them. One of these exhibits probably inspired a pastel drawing by Edgar Degas, formerly known as “Russian Dancers” (circa 1899) and housed in the National Gallery in London. But the performers depicted are “almost certainly Ukrainian rather than Russian”, according to the museum, which has renamed the work to recognize its true protagonists.

“Ukrainian Dancers”, as it will henceforth be titled, depicts a dynamic mass of dancers in traditional folk costume, wearing hair ribbons and garlands, dotted with blue and yellow, in an apparent reference to the colors of the Ukrainian flag.

Since the beginning of the Russian invasion in February, calls for a renaming of the Impressionist work have multiplied on social media, led by Ukrainian voices denouncing the historical and continued appropriation of their nation’s culture by the Russia. Mariam Naiem, an Afghan Ukrainian artist and activist, says she emailed the National Gallery on March 14 asking for the title to be corrected and describes the museum’s compliance as a “micro victory”.

“For cultures that have experienced oppression for centuries, the time to understand and grow their culture is vital,” Naiem told Hyperallergic. “Russian imperialism destroyed everything related to Ukrainian culture for centuries: the Ukrainian language was subjected to linguicide, writers were exiled, poets were shot and some artists were killed in unthinkable ways.”

“Even after Ukraine’s independence, Russian culture remained hegemonic until 2014. More than ever, we need to understand what every forgotten Ukrainian artifact, appropriated artist or cultural object is worth to us,” Naiem added.

Tanya Kolotusha, a Ukrainian living in London, expressed her support for Naiem’s ​​campaign, posting an image of the artwork on Instagram and writing, “One of the reasons the Kremlin and its dictator invaded my country is the desire to own a history of Kyivan Rus! Should we wait for Ukraine to win the war before starting a big change on the cultural front?

President Vladimir Putin has always denied Ukraine’s statehood and cultural identity, notoriously referring to Russians and Ukrainians as “one people”. In an essay for Hyperallergic last month, Ukrainian film critic Daria Badior condemned this flattening of her country’s heritage, a deeply misguided narrative she says the Western art world and media often reinforce.

“In the mainstream media, few people can discern whether an artwork was created in the Ukrainian, Georgian, Estonian or Russian Soviet Socialist Republic – it just seems, to the general public, like the soviet art and therefore RussianBadior wrote.

“The ‘great Russian culture’ that everyone refers to today is great precisely because of its diverse representatives from Ukraine and other communities, captured throughout Russia’s imperial history,” he said. she added.

A spokesperson for the National Gallery told the Guardian that the title of the book “has been an ongoing topic of discussion for many years”.

“However, there has been increased attention to this topic over the past month due to the current situation, so we felt it was an appropriate time to update the title of the table to better reflect the topic. of the painting,” the spokesperson said.

An essay published by the J. Paul Getty Museum in Los Angeles in 2016 on the occasion of his exhibition “Russian dancers” and the art of pastel, which included a work by Degas from the same series, acknowledged the title as a misnomer. Despite their unique dress and cultural cues, the performers depicted were generically labeled “Russian dancers” because Ukraine was still part of the Russian Empire at the time, and subject to harsh “Russification” policies that were aimed at erasing the nation’s art, language, and language. customs.

The drawing exhibited by the Getty was lent by a private collection. It remains to be seen whether other institutions holding works from the same group, such as the Metropolitan Museum of Art in New York, will follow suit at the National Gallery.

“Because of Russian politics, we Ukrainians have to recreate the image and understanding of ourselves,” Naiem told Hyperallergic. “Western politics or any other culture will not help us in this. This is our path, which we begin now.