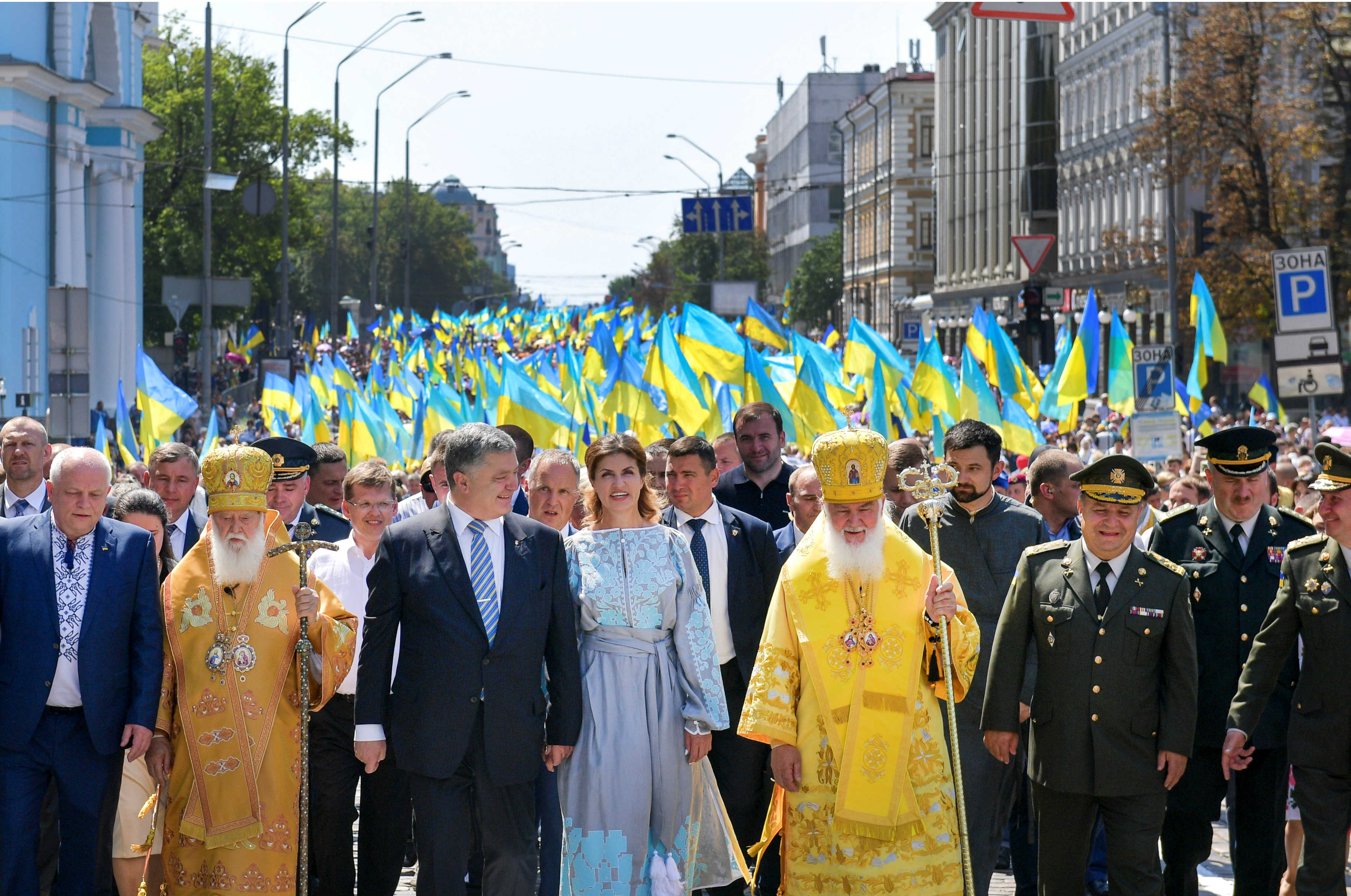 The head of the Ukrainian Orthodox Church of the Kyiv Patriarchate Metropolitan Filaret, Ukrainian President Petro Poroshenko and his wife Maryna take part in a procession marking the 1030th anniversary of the Christianization of the country, then known as Kyivan Rus’, in Kiev, Ukraine July 28, 2018. Mykola Lazarenko / Ukrainian Presidential Press Service / Document via REUTERS

One of the biggest differences between Eastern and Western Europe is the role of the church. On paper they are separate, but in Eastern Europe tradition trumps law and the influence of the church is immense. In Ukraine, the church is the most reliable institution, which is a good thing, but the fact that one of its strongest branches openly sympathizes with Russia means that the secular world can no longer choose to ignore this question.

Ukrainian religious life is best known for its division between the Kiev and Moscow Patriarchats. The split took place in 1992 on the grounds that an independent country should have its own church. Since then there have been many attempts to unify the church from within but the ideological differences seemed too great. The Kyiv Patriarchate was known for its strong pro-Ukrainian stance, while the Moscow Patriarchate was seen as a supporter of “Russkiy mirÂ»Ideology (Russian world) and unity between Russia and Ukraine. This stereotypical division was confirmed by the church’s reaction to Euromaidan and the Donbass War that followed.

The Kyiv Patriarchate strongly supported the Euromaidan movement. Priests were not only among the Maidan protesters at all times, but the churches and monasteries in central Kiev were used by the revolutionaries as hospitals, canteens and dormitories. The Moscow Patriarchate has remained loyal to the now disgraced former president Viktor Yanukovych and his allies and has even praised the riot police’s brutal actions against peaceful protesters.

But the true face of the Moscow Patriarchate was revealed when Russia invaded Ukraine in 2014. The church turned a blind eye to Russia’s direct involvement in the war, calling it a civil war instead. He also succeeded in scandalizing Ukrainians with his numerous refusals to bury Ukrainian soldiers who died as fallen heroes while defending their country. This did not go unnoticed by the faithful.

The actions of the Moscow Patriarchate have become a catalyst for further talks on an independent and united Ukrainian church. The presidential administration has been actively engaged in this process, but has contented itself with tackling a hot issue for some time. But something has changed. The Verkhovna Rada and the government had never supported the president’s overtures in the past. The government’s now unanimous position reflects the state’s willingness to play a mediating role if necessary, but more importantly, it signals that Ukrainian society is ready for this step.

Most experts and religious authorities claim that the granting of the Ukrainian Patriarchate Tomos – or a document from the Ecumenical Patriarchate of Constantinople acknowledging his autocephaly so that the bishop does not fall under any higher authority – is almost a done deal and in a few month. It would redraw the religious borders of Eastern Europe for the first time in almost 400 years.

The importance of this decision is hard to overestimate. The Orthodox Church and its influence on its neighbors is one of the last vestiges of the Russian Empire. It is also one of the most effective instruments for disseminating Russian stories and influencing opinion. In the case of Ukraine, the stakes are even higher because it gives the aggressor state direct access to the hearts and minds of Ukrainians. It is no exaggeration to regard the Independent Church of Ukraine as a matter of national security.

Second, an independent Ukrainian church will greatly diminish the position of the Russian Orthodox Church. Without its Ukrainian parishes, it will no longer be the largest Orthodox church in the world, which Russian priests have used to demand more rights and a stronger position among world Orthodoxies. For Russia, it will be a double blow: losing both Ukraine and its international position in the religious world.

Finally, a united church will have an impact on Ukrainian political life. If successful, Poroshenko will get the credit. However, many still speculate whether the unification of the church will increase Poroshenko’s popularity and whether those who support the idea will become Poroshenko’s supporters by default. Undoubtedly, Poroshenko will use the church as one of the cornerstones of his presidential campaign, with the strengthening of the army and the status of the Ukrainian language.

Granting a Tomos to the Ukrainian Patriarchate in Kiev will be an important step, but it will only be the beginning of a long process of unifying the Ukrainian Church. Parishes will then have to decide whether they wish to join the new church, an issue that revolves around power and ownership. As complex and lengthy as it is, this process must start. A united national church is the last piece missing to make Ukraine truly independent.

Kateryna Kruk is a Ukrainian political scientist and communications expert at StopFake and the European Values â€‹â€‹Think Tank. In 2014, the Atlantic Council awarded him its Freedom Award for communicating the Euromaidan revolution to the world via Twitter. She tweets @Kateryna_Kruk.