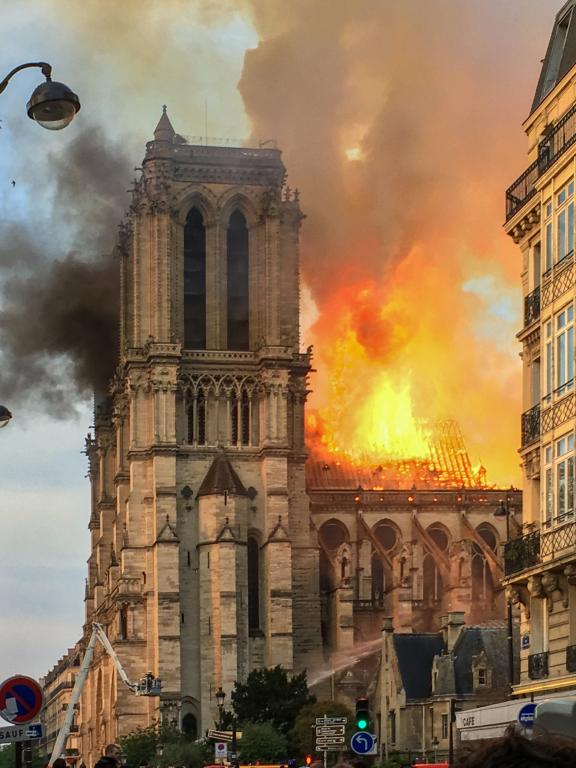 The globalization of Notre-Dame de Paris: for the Great and Holy Tuesday

Paris, according to Marxist geographer David Harvey, is the Capital of modernity. There is a path through Harvey’s voluminous work, as he himself shows in his essays on the city, in which Paris as a city is the common thread that connects much of his analysis of geographies. unequal capital. The operative concept here is creative destruction, that the modern, that is to say the new, must come out of the old by being destroyed. The magical year for Harvey is 1848, the revolutions that would have caused a break in Parisian consciousness, a break between daily lives with a sort of romantic alienation to an all-out revolutionary consciousness at least in the realm of theory. The general wisdom that new life comes from the ashes is the modern creative destruction ideology, the genre that burns the old and the quaint to make way for the new and the stylish.

It has been a week since the Notre-Dame de Paris fire, and many comments have been rumored about it. My favorite was my friend Chris Schaefer’s in Common good, because his narrative is so non-ideological, the sight of another person in the streets of Paris felt like the heartbreaking pain of the architectural heart of his city undergoing immolation. What I said in the heat of the moment is that it is also our home, because the Greek Catholics found themselves in this house of prayer, even in the enthronement of the bishop of our country. church for Western Europe at the time, Borys Gudziak, in 2013 .; it is now going to be our metro in the United States. Other commentators weren’t quite so good, with some noting how symbolic and even more than metaphorical the flames were for the blaze of Western civilization, mainly because its Catholic heart had long been evacuated – and this line of thought in particular, mainly because the commentators recycled the counterrevolutionary propaganda which Harvey also speaks of at the end of his book on Paris when he speaks of the Basilica of the Sacred Heart. A few have even speculated that Muslims burned down the cathedral, a terribly Islamophobic thought that feeds on the paranoia sparked by the Charlie Hebdo shootings, the other Bataclan shootout, and the images of Islamic hegemony that arise through the novel by Houellebecq Submission.

The truth is probably much more commonplace. A friend of mine pointed out to me that VICE made a documentary last year on Notre-Dame de Paris in need of serious architectural repairs. The building was becoming structurally unstable and wealthy Americans had started to contribute by the thousands and tens of thousands to have it repaired. One of them is interviewed in the video. He compares his own transatlantic gifts to how Notre Dame was built in the first place: “It’s amazing when you think about it, that Notre Dame has survived for 850 years. Even then, they were sourcing raw materials from all over Europe, like wood would come from Scandinavia, and I thought, how is that possible? It’s like 1400, and there was already, you know, like, globalization. The rest of the story almost tells itself. The repairs were in progress. Something caught fire. Workers notified firefighters before it was too late. The visitors were evacuated. The building burned down. The billionaires have decided to give more. That was it, you know, like globalization.

I’m not cynical enough to think the building was intentionally destroyed to make way for a new one. But it’s a bit awkward to consider, unlike conspiracy theories about the fire’s origins, the mundane way the cathedral likely burned down: by its repairers, funded globally, in need of more repair, with funding always at the global level. It is creative destruction as a nonchalant reality, that as the world changes, new technologies will have destructive side effects that will be redeemed by a future of new things replacing the old one.

I’ve been reflecting on this dynamic over the last week, and since it’s the Great and Holy Tuesday, it’s finally a good time to write about it. The synaxarion, as well as the kondak, focus our attention on the ten virgins awaiting the Bridegroom, five of whom are wise and carry oil in their lamps, and five who are foolish who have none. Today’s meditations are emphasized in their reflection on how the focus on each of these parabolic people is a virgin means that they have all succeeded in practicing the one virtue of chastity. Being chaste is not the problem, although it is often elevated to the rank of one thing often by social conservatives who believe that the core of Western, or European, or Christian, or Catholic, or Orthodox “civilization” is. attacked by a ‘sexual revolution’ from which a number of options would have to be put forward to stem its tide: adopt draconian laws against sexual non-normativities, fall back into intentional Christian communities, carry out social experiments in our families to re-educate our children to abstinence. The synaxial reading delves into the tropars of the canon to say that the five foolish virgins were the ones who focused on chastity at the expense of the more social virtues – alms, they say at one point, and love to another, but really in the context of the kingdom of heaven which culminates in the series of three parables which begins with the virgins and ends with the sheep and the goats, social justice. Focusing on chastity at the expense of social justice puts you in danger of the fires of hell, says the orthodox commentary on Great and Holy Tuesday. The oil in our lamps must be the work of love, almsgiving, and service on a personal and structural level if we are to be prepared for the arrival of the Bridegroom.

From this perspective, the commentary on the outpouring of generosity at Notre-Dame de Paris takes on a new meaning. Cynically, the meme has circulated that there is still a colonial obsession with the burning of the church in the metropolis, and Indian country today reminds us that the destruction of all sacred space, including indigenous places of prayer and black churches, must also be deplored. The capital which has now become visible in the repair of Notre Dame has led to some criticism that this money should be taken and given to the poor, that if only billionaires had the political will, world hunger, scarcity of water and climate change could be easily solved. Some responded that it was a question of both / and; channeling Jesus responding to his traitor Judas that the breaking of the alabaster jar by Mary of Bethany could have been avoided by selling it to donate it to the poor, they tell us that Our Lady is priceless and that the The money that will be spent on it, a government building leased exclusively to the Latin Church (and which we Kyivians borrow from time to time), is well worth it.

But as with any commentary that comes from mothers and fathers in the church, the words cannot be taken at face value, but viewed in the biblical context and contemporary reality. The synaxist speaks of virginal chastity as marking all virgins, but the context of the Gospel of Matthew launches a broader criticism of both the Temple authorities and the anti-colonial separatists who gang up on Jesus. When the Lord criticizes the scribes and Pharisees sitting in the seat of Moses, it is not about their works of chastity, but rather their obsession with liturgical decorum, the details of the ceremonial law, the aesthetics of the cult and a kind of rad trad proselytizing where a separatist could cross oceans and rivers to make a twice proselyte a son of Hinnom’s Vale as one of them. Theological aesthetics, especially that with a saving civilizational impulse, without social justice, in other words, makes a dead faith; it is, in the final analysis which is also exposed in the third chapter of the book of William Cavanaugh Theopolitical imagination, a facade of Christian communion which serves as an ideological mystification of the processes of creative destruction inherent in the functioning of world capitalism, of which globalization is a number.

The problem of the fires of Notre Dame that we face on this Great and Holy Tuesday, in other words, is not so much the rise of attention on a burning sacred space in the world at the expense of the churches. black and indigenous places of prayer, nor even the naive idea that global philanthropy could save the world if only there was the political will. Rather, it reveals what kind of site Notre-Dame has itself become in the global imagination: a pole of globalization mystified by an ideology of Western Catholic civilization to be deployed against atheists as against Muslims. It is indeed ironic that in the end, the so-called “globalists” whom the far right blames for the weakening of “Judeo-Christian civilization” and those who invoke the trope of the restoration of European Christianity to from the creative destruction of Notre Dame are really saying the same thing, probably without knowing it. Neither of the groups, the irony continues, is really concerned with Notre-Dame as a house of prayer for the Parisians who make this city their home. It is the fantasy of what Notre-Dame could be for a Paris without symbols and without people that feeds the funding.

For this reason, the Parisians who saw the heart of their house burn were right to rush into the streets. If the ideology of globalization devastates anything, it is the idea that a city is above all the home of people whose daily life makes urban spaces places of prayer, family, food and laughter. . Having such a sense of rootedness is the source, generally, of a sense of social justice, that because I live in this space and am rooted among this people, I want to work so that these commons are truly fair for everybody. Globalization and social justice are often at odds with each other; the conservative nostalgia for a civilization that never existed masking the processes of world capital and a rooting in love and place are like oil and water. The message of the Gospel is that it is in fact the latter which is the oil that the wise virgins bring in their lamps to meet the Bridegroom, the fuel that burns like light in darkness in opposition to fantasies of destruction. creative by which houses are burned and hearts are devastated.

The death of a grandfather: on the resurrection of Lazarus from the dead