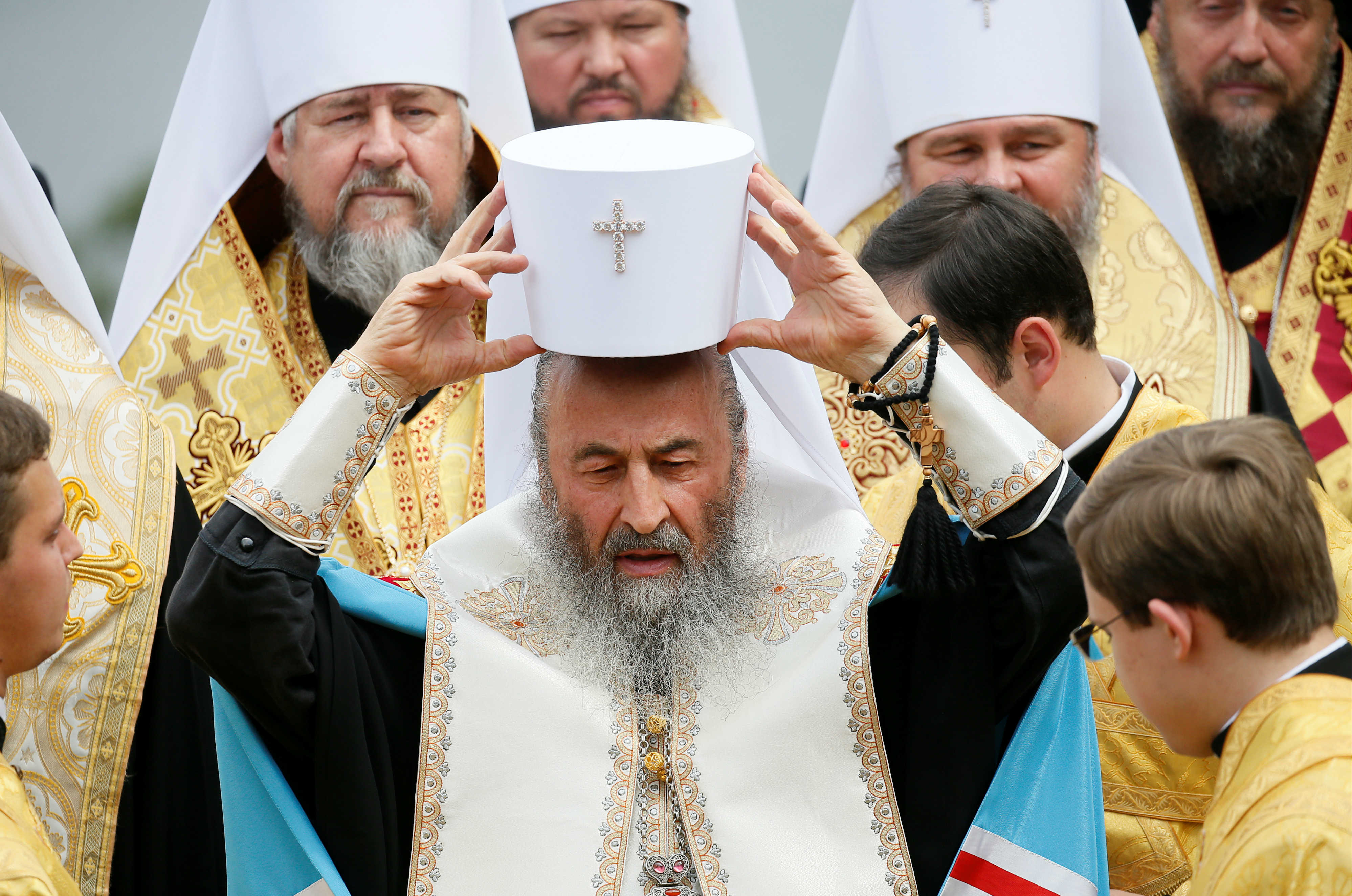 The geopolitical divorce of the century: why Putin can’t afford to let Ukraine go

The Metropolitan of Kiev and All Ukraine, Primate of the Ukrainian Orthodox Church of the Moscow Patriarchate, Onufry, participates in a ceremony marking the 1030th anniversary of the Christianization of the country, which was then known as Kyivan Rus’ , in Kiev, Ukraine July 27, 2018. REUTERS / Valentyn Ogirenko Next month, Europe’s leading low-cost airline will start scheduled flights from Ukraine to a host of EU destinations. This is the latest stage in a Ukrainian aviation boom that sees additional routes announced every week and a record number of passengers at the country’s airports. Each new flight serves to broaden Ukrainian horizons and to anchor the country more firmly within the wider international community. Meanwhile, there has not been a single direct flight between Ukraine and Russia since October 2015.

The changes in Ukraine’s airline industry are just one of the many ways the country has turned away from Russia and globalized since the height of the Euromaidan revolution in early 2014 and the beginning. of Vladimir Putin’s Hybrid War. Since then, Russia’s share of Ukrainian exports has fallen from 24% to around 9%, while Russian imports to Ukraine have halved. As economic ties between Kiev and Moscow loosen, Ukrainian businesses have begun to discover life after Russia. In 2017 alone, trade between Ukraine and the EU increased by almost a quarter and India has become the largest international market for Ukrainian agricultural exports. Domestically, US companies are replacing longtime Russian partners. The first General Electric locomotive engines recently arrived in Ukraine, while the Soviet aviation flagship Antonov is now working with Boeing.

Growing international mobility makes it easier for ordinary Ukrainians to look beyond Russia. The advent of visa-free travel to the EU for Ukrainian passport holders in the summer of 2017 is transforming attitudes towards the rest of Europe and helping Ukrainians shed the psychological shackles that have long locked the country in narrow confines of the post-Soviet world. Even Ukrainian migrant workers are more likely to go west than north. Poland has become the destination of choice, accounting for almost three times the volume of remittances as Russia in the first quarter of 2018.

To make matters worse, Moscow is running out of soft power tools to counter the collapse of Russian influence in Ukraine. Kremlin-related social media platforms, like the Russian version of Facebook, are technically banned for Ukrainian users, while quota restrictions and outright bans have excluded Russian products from the Ukrainian media market. Meanwhile, many Russian celebrities are no longer welcome in Ukraine as the notion of a common culture falls victim to the undeclared but ongoing war between the two nations.

The Kremlin has done no better in matters of soul. Millions of Ukrainians have turned their backs on the Russian Orthodox Church since the outbreak of hostilities, with entire congregations pledging their allegiance to Kiev. A greater threat to the position of Russian orthodoxy in Ukraine looms on the horizon. In the coming months, the Patriarchate of Constantinople is expected to largely grant Ukraine full Orthodox independence from Russia. It would strike at the very heart of Russia’s historic claims to Ukraine, denying Moscow’s authority over the country’s Orthodox worshipers while dramatically strengthening Ukraine’s sense of national identity.

Even if Russia still benefited from all the communication channels of yesteryear, a majority of Ukrainians would not be willing to listen. The trauma of the Russian invasion caused a massive shift in Ukrainian public opinion, with support for EU and NATO membership reaching unprecedented levels as enthusiasm for closer ties with Russia is shrinking to single digits. While it is certainly difficult to imagine Ukraine joining NATO or the EU anytime soon, a return to Russian orbit seems infinitely more outlandish. Indeed, pro-Russian positions have become politically toxic in today’s Ukraine, with the few remaining Kremlin-friendly parties being forced to disguise their positions in the language of pragmatism.

This was not Putin’s intention when he first gave the order to invade Crimea. Moscow had hoped to derail Ukraine’s defection to the West. Instead, the conflict slipped out of the Kremlin’s control, turning an awkward but ultimately intimate relationship into the geopolitical divorce of the century. It is a divorce that is fast approaching the point of no return. As Ukraine increasingly gets used to living beyond the familiarities of the post-Soviet comfort zone, reconciliation becomes less likely and separation takes on an air of greater permanence.

In public at least, Russian leaders remain in denial of this historic loss of influence. They speak of an inevitable future rapprochement with Ukraine while accusing external elements of fabricating the current divide. Moscow appears to be basing its hopes on the presidential and parliamentary elections in Ukraine in 2019, but this is little more than the wishful thinking of a great power reluctant to admit it made a big mistake. Deep in their hearts, members of Putin’s inner circle must know that the days of pro-Russian majorities in Ukrainian politics are long gone.

With little chance of regaining control of Ukraine, there is a real danger that Russia will decide that the next best option is chaos. Time and time again over the past four years, the Kremlin has demonstrated its willingness to pay a remarkably high price to prevent Ukraine from escaping from Moscow’s orbit. By refusing to withdraw from Ukraine, Russia has allowed its relations with the West to crumble. Moscow is initiating a similar break with the world leadership of the Orthodox Church, all because it cannot contemplate the notion of religious independence for Ukraine. These dramatic actions are more than the irrational actions of a despised lover or a rejected spouse. They reflect the widely held belief that the emergence of a fully Westernized and democratic Ukraine would spell the end of the Putin regime and, quite possibly, of the Russian Federation itself.

While most Russians have a somewhat disinterested view of the former vassal states that became members of the EU such as Poland and the Baltic states, they tend to view Ukraine as virtually indistinguishable from their own country. Thanks to this blurring of borders, any successful transformation of Ukrainian society to the European model would inevitably lead to calls for similar developments inside Russia. Many in Moscow believe that popular demands for grassroots democratization would soon put impossible pressure on the predominantly imperial structures that hold modern Russia together. Fear of a “Ukrainian domino effect” has haunted the Kremlin since the Orange Revolution of 2004 and helps explain why the popular Putin feels the need to maintain a large security apparatus while preventing the emergence of any real political opposition.

This willingness to defend Russia’s authoritarian model at all costs makes it unlikely that the Kremlin will ever accept Ukraine’s membership in the Euro-Atlantic community unless it is forced to. With little appetite in the West for direct confrontation, Ukraine finds itself in the precarious position of enjoying considerable international support, but essentially alone in the face of one of the most powerful and reckless nations in the world. Since 2014, Ukrainians have exceeded all expectations thanks to their ability to resist hybrid attacks from Russia while making significant progress towards greater integration in the world. They must now come to terms with the idea that Russia will continue to pose an existential threat for many years to come. This means indefinitely holding a front line stretching from the Sea of ​​Azov to cyberspace. There is no other option if the divorce is to become final.

Peter Dickinson is a non-resident member of the Atlantic Council and editor of Business Ukraine and Lviv Today magazines. He tweets @Biz_Ukraine_Mag.