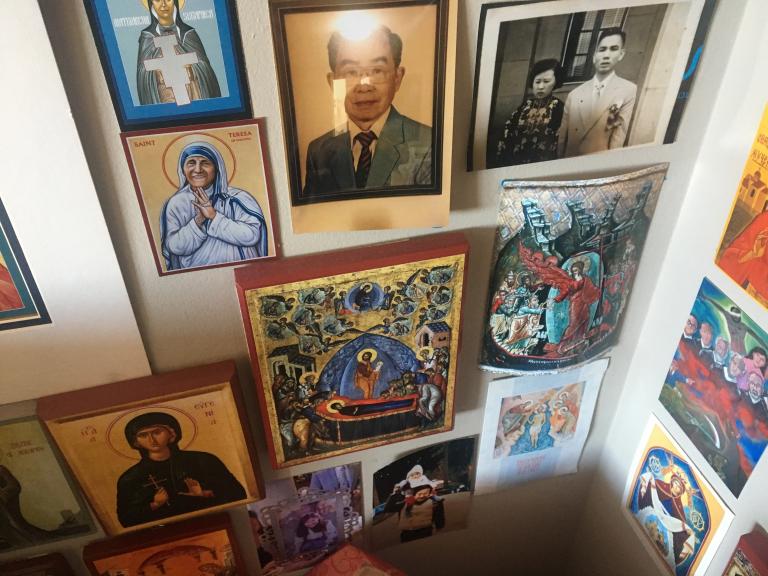 The death of a grandfather: on the resurrection of Lazarus from the dead

I was eleven years old when my grandfather died. He was not doing well when he did. A few months before his death, he had stopped taking his antipsychotic medication. He was clinically depressed, and he had been a long time before the fashion started, and he was about to get in a lot of trouble for just bringing a pair of scissors to a neighbor’s flowers. because he loved them and wanted to take them home. It turned out that he had even more problems with his colon. Having vomited feces, he was rushed to hospital, where he remained in intensive care for months, one day improving, another sliding into the abyss.

The night he died was just like any other, in the sense that he had many nights he was going to die and he didn’t. He was even revived twice. My sister and I were rushed to a babysitter, where I spent the night alternating between working on a ‘country report’ assigned to school (I had chosen China, only for realizing the story section was going to be murder) and strategy boards for Warcraft II at a time when my sixth grade teacher had yet to figure out that I was doing witchcraft. We got a call later that night that Grandpa was really dead. Most of him was not dead. He was all dead. There was no resuscitation this time.

My father told me how it went a few days later. Grandpa’s heart monitor had suddenly flattened as the family gathered, and there had been no return pulse. Knowing that this was the end, my father went into pastor mode; he was, at the time, the unpaid pastor of the Cantonese congregation of our Taiwanese church in the San Francisco Bay Area, and it became clear that our parents’ pastor in the city, as San Francisco is called for us, the commuters, was not going to do it on time. Dad said he took out his Bible, raised his hand to bless my dying grandfather and said in Cantonese: I am the resurrection and the life. Whoever believes in me, even if he has to die, will he live. For the first time in all this ordeal, grandmother, who had fought with her husband for years over his stupid decisions and incomprehensible Cantonese as the privileged son of a Shanghai tycoon who had lost everything at the hands of the Communists and made sure you knew that as an excuse. for his delusional activities, cried. As she said goodbye to him through sobs and even told him that she loved him, he died.

For me, this scene is a deeply theological moment, a moment which, in my opinion, crowns this Great Fast. During and outside of this fast, I thought about death, mainly because what started our mission in Chicago was that our dear friend, Fr. Myron Panchuk, passed away. At the end of this Lazarus Saturday, I come back to it, finding in its disorder a renewed sense of what it means that the Lord is the resurrection and the life although unlike Lazarus, my grandfather was not called to the tomb in his funeral clothes after four days of death. It is perhaps from the long meditation of mothers and fathers on Lazarus which began last week in the Sunday Matins of Saint Mary of Egypt that began my reflection. In the canon, the tropars speak of Lazarus, the poor beggar sitting in front of the rich man’s doors waiting to eat the crumbs at his table. It’s also a favorite of my father, who studied the passage in depth with his seminary teacher Joel B. Green in a class on wealth and poverty in the gospel of Luke. Dad always likes to point out every time he preaches this passage that the rich man was so filthy rich that he would use the bread at his table as a napkin to wipe his hands off and then throw it out the door where Lazarus was waiting for him. ‘to grab .

In last week’s Matins canon, the tropars of Lazarus and the rich man suddenly merge with Lazarus of Bethany, and the stichera of Vespers for all of the following days, including the liturgy of presanctified gifts on Wednesday evening, do the same. In the spirit of the church, the Bethany family seems to be a financial mess, Lazarus as poor, while Mary his sister is a double trouble, once to his sister Martha in Luke for sitting at the feet of the Master instead of helping him with the housework, and another to the disciples for breaking an alabaster jar on Jesus’ feet. There is indeed something to be said here about Mary of Bethany’s obsession with the feet of the Lord, but what is more relevant here is that Lazarus is probably not rich and certainly not powerful. It is telling that he is mourned by so many Judeans in the passage, except that after he is raised from the dead, they make plans to kill him again.

In this way, I often identify my grandfather with Lazarus. I wouldn’t say he was poor, even dispossessed by the Communists, because he worked in a big financial institution in Hong Kong. Of course, the real reason the family managed to belong to the middle class was that my grandmother was the breadwinner: she was the principal of a major Methodist school. My grandfather, meanwhile, was employed by a relative who ran the local branch of the company he worked for, and he was taught to look busy at his desk while smoking. The only result of this advice was that he became a diehard smoker – he was otherwise unproductive, which is why he was never promoted – and smoking destroyed his health, first his skin, then his system. digestive. This is why grandmother, like the two sisters in Bethany, often fought with him. The two, both refugees in Hong Kong after the Communist revolution in the north, had been reunited by a matchmaker, who was unaware that they were both dating other people in Shanghai and Guangzhou, respectively. They didn’t even speak the same Chinese language: he spoke Shanghainese, she Cantonese, and during the first years of their marriage, they communicated through sign language. She has had tremendous success in her career, when nothing has ever worked for him. The only people who loved him were the children, to whom he told long, winding stories. I know: he told me so many classic stories Travel west he could before he died.

The resurrection of Lazarus reminds me that even this man, my grandfather whose every aspect of life, from dispossession to employment to health, marks him as a loser, will be raised from the dead. This is what it means that my father raised his hand to him and pronounced the resurrection and the life over him. It is because he, along with Lazarus as well as any person whose life is marked by alienation and oppression, will hear the voice of the Lord on the last day which emerges from the tombs. This means that even I will hear that voice, I who have to admit that if there have been difficulties in my own career – I have spent five years in the college job market cursing every father figure who had me. assured from the start that it was a profession until I finally got a permanent position – they have nothing to do with feminism or affirmative action or anything else people blame for alienation male and underemployment. I come from a family of at least four generations on both sides of strong career women and weak men who make terrible business decisions. And yet, we will all be resurrected on the day of resurrection.

I carry this reflection, which has been simmering since the beginning of the fast, in the Great and Holy Week. More than any other year, this year’s fast has been almost atheist, my thoughts focusing on who we are as ordinary inhabitants of this land without masters to set us free. If there is anything cosmic supernatural, it is in the stuff of ordinary life; if we can speak of a theology of the body, it will be in the language of our bodies instead of the words of a Holy Father whose feet of clay have been revealed in the most devastating way in the crisis of sexual abuse. If fasting is for me a time to relive my catechumenate, the teaching that I received this year concerns the absence of God precisely because he is present in our midst. Along with Lazarus, my grandfather, and the rest of alienated humanity, I am now heading to the city for Palm Sunday, anticipating the events of this week which will show the Lord suffering among us so that we all rise up with it. him.

The globalization of Notre-Dame de Paris: for the Great and Holy Tuesday