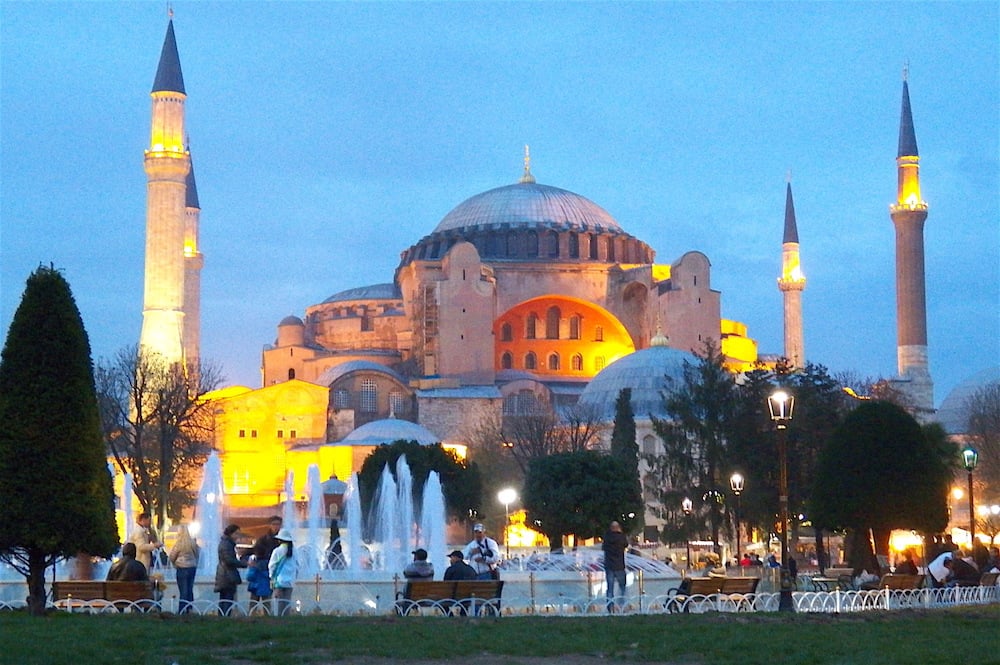 Hagia Sophia in Istanbul remains the symbolic center of the Greek Orthodox faith, even nearly six centuries after its fall to the Ottomans and its conversion into a mosque.

From 537 to 1453, the â€œGreat Churchâ€ – as the Byzantines called it – was the eastern heart of Christianity.

The massive temple contained a total of 23,000 worshipers and 525 priests, deacons and cantors served its liturgies.

However, the importance of Hagia Sophia (“Holy Wisdom” in English) was certainly not only because of its imposing size.

Built on a strategic point of the “New Jerusalem”, as Constantinople was called at the time of its construction, it was a symbol of the greatness of the Byzantine Empire and the domination of the Christian faith after decades of persecution. By the Romans. .

It served as the absolute center of religious, political and artistic life for the entire Byzantine world.

The role of Hagia Sophia in politics and religion remains controversial even today, nearly 600 years since the ultimate symbol of the Byzantine Empire was taken over by the Ottomans, and a century since the collapse of the ‘Ottoman Empire.

The cathedral in its most recent form was completed in 537 AD, but the original church at the site of Hagia Sophia is believed to have been built during the time of Constantine I in AD 325, on the foundations of a pagan temple.

His son Constance II consecrated the great cathedral in 360. It was damaged in 404 by a fire during a riot following the second banishment of Saint John Chrysostom, then Patriarch of Constantinople.

It was rebuilt and enlarged by the Roman Emperor Constans I. The restored building was consecrated again in 415 by Theodosius II, but it was again set on fire during the Nika Uprising in 532.

The burning of the cathedral sparked Justinian I’s vision to build a magnificent cathedral to thank God for saving his throne during the Nika uprising and to honor Christendom. At the same time, the massive building would present to the world an undeniable demonstration of Justinian’s power and wealth.

It was on February 23 that the Emperor gave the order to build Hagia Sophia. The architects Anthemius de Tralles and Isidorus de Milet were called upon to erect the magnificent cathedral, which would become the greatest symbol of Christianity in the world.

Hagia Sophia combines a longitudinal basilica and a centralized building in a very original way, with a huge 32-meter main dome supported by pendentives and two half-domes, one on each side of the longitudinal axis.

In plan, the building is almost square. There are three aisles separated by columns with galleries above, and tall marble pillars rising up to support the dome. The supporting arches of the dome were covered with mosaics depicting six winged angels, called “hexapterygon”.

The walls above the galleries and the base of the dome are pierced with windows which, in daylight, obscure the supports and give the impression that the canopy is floating in the air.

The marble used for the floor and ceiling was produced in Anatolia and Syria, and the bricks used in the walls came from as far away as North Africa. The interior of Hagia Sophia is lined with huge marble slabs that are said to have been designed to mimic moving water.

The 104 columns of Hagia Sophia were imported from the temple of Artemis in Ephesus, as well as from Egypt. The building is some 93 meters (9,305 feet) in length and 81 meters (266 feet) in width and, at its highest point, the domed roof rises some 61 meters (200 feet) in the air.

The architects of Hagia Sophia, by creating a space that is unique in the world in its overall impression and incredible attention to detail, created a building that has an undeniable ethereal and otherworldly quality.

The Cathedral has its own unique and eerie spiritual meaning which is felt by all who enter it and cannot be explained by any rule of architecture or engineering.

This architectural masterpiece only took six years to build, a remarkably short time for a work of such magnitude. The inaugural liturgy was conducted by Patriarch Minas on December 27, 537. The emperor was amazed when he entered the temple. He went up to the pulpit, raised his hands to the sky and cried, â€œThank you, God, for you have done this work with me. I beat you, Solomon.

The great earthquakes of 553 and 557 unfortunately affected the stability of the great dome of Hagia Sophia. On May 7, 558, during restoration work, the eastern facade of the dome collapsed and crushed the altar and the pulpit.

Justinian gave the order to rebuild the temple, and the restoration also took almost six years. The altar having been destroyed, the temple had to be re-inaugurated.

The second inauguration ceremony was performed with the same majesty as the first, on December 24, 563, by the Ecumenical Patriarch of Constantinople, Eutychius.

Hagia Sophia became the center of the Greek Orthodox

Hagia Sophia became the seat of the Orthodox Patriarch of Constantinople and a primary setting for Byzantine imperial ceremonies such as coronations. But like other churches across Christendom, the basilica also offered a sanctuary from persecution to outlaws.

In 726, Emperor Leo the Isaurian banned the veneration of images, ordering the army to destroy all religious icons, ushering in the period known as Byzantine iconoclasm. All religious images and statues were then removed from Hagia Sophia.

Over the years, the huge church has suffered damage from fires and earthquakes, but it has always been restored. During the Fourth Crusade, Hagia Sophia was ravaged and desecrated by the Crusader Knights of the West.

During the Latin occupation of Constantinople, which lasted from 1204 to 1261, the church became a Roman Catholic cathedral. Enrico Dandolo, the Doge of Venice who commanded the sacking and invasion of the city by the Crusaders in 1204, is buried inside the church, most likely in the upper eastern gallery.

After the city was recaptured by the Byzantines in 1261, the temple was restored, as it had been nearly destroyed in previous years. The Byzantine emperors who followed attempted to return the iconic church to its former glory, but had little success.

On May 29, 1453, after more than nine centuries in the service of Christendom, the glory of Hagia Sophia came to an end, with the Byzantine Empire. Despite the courageous efforts of the last Byzantine emperor, Constantine XI Paleologus, who fought valiantly to defend Constantinople, the city fell into the hands of the Ottomans led by Sultan Mehmed II.

Despite the fact that Hagia Sophia was in poor condition, the Christian cathedral still made a strong impression on the new Ottoman rulers, and they decided to convert it into a mosque. Four minarets were added to the exterior corners of the building.

Many changes have also taken place inside the building. All surviving mosaics and sacred icons were covered with plaster or yellow paint, with the exception of the Theotokos (the Virgin Mary, depicted with Jesus).

The unique architectural style of Hagia Sophia, and the dome in particular, would influence Ottoman architecture, especially in the development of the Blue Mosque, built in Istanbul in the 17th century.

In 1934, Turkish President Kemal AtatÃ¼rk transformed the iconic building into a museum. In recent years, restoration work had been carried out on Hagia Sophia and several of the mosaics had been discovered.

Despite the ravages of time, Hagia Sophia remains universally recognized as one of the most beautiful buildings in the world. It was named a UNESCO World Heritage Site in 1985.

In early July 2020, the Turkish State Council overturned the 1934 Cabinet decision to establish the museum, revoking the monument’s status, and a subsequent decree by Turkish President Recep Tayyip Erdogan ordered the reclassification of Hagia Sophia as a mosque.

The 1934 decree was ruled illegal under Ottoman and Turkish law because the Hagia Sophia waqf, endowed by Sultan Mehmed, had designated the site as a mosque; supporters of the decision argued that Hagia Sophia was the personal property of the Sultan.

The new designation is controversial, citing condemnation from the Turkish opposition, UNESCO, the World Council of Churches and many international leaders.