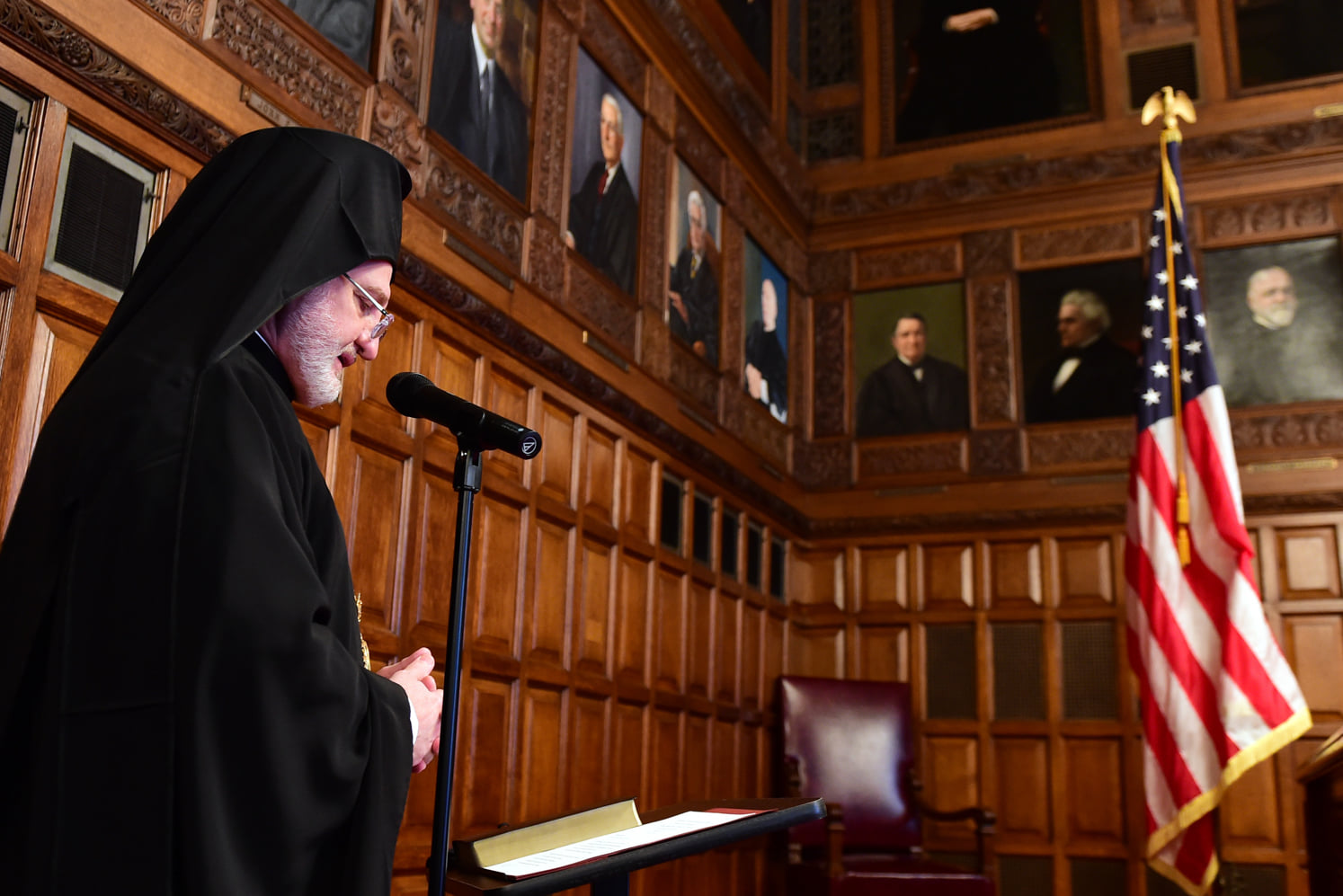 Approaching the bench of New York State’s highest judicial authority, Archbishop Elpidophoros of America advised the court:[God is] the source and foundation of the law” and “and he asks only that we act justly, and that we practice love and mercy, compassion and understanding”, opening the ceremony of investiture of three new associate judges : Madeline Singas, Anthony Cannataro and Shirley Troutman, who are the final Associate Justices of the New York State Court of Appeals on April 5, 2022.

Judge Madeline Singas, who previously served as the Nassau County District Attorney, is the first Greek-American to serve on the state’s highest court. A first-generation American, she was born in Massachusetts in 1966 with roots in the Epirote villages of Glina and Argirochori.

Like many Greek-Americans, his parents worked in the restaurant business. They moved the family to New York when Judge Singas was only six years old, where they operated a pizzeria in Astoria. “I come from very humble beginnings,” Singas pointed out.

“My parents didn’t speak English – they came as immigrants to this country and today I’m here to show that the American dream is alive and well,” she said upon her appointment. the judiciary in 2015.

“Philotimo” is a distinct attribute of the Greek community passed down to him by Singas’ parents, teaching him by example the importance of service to others.

“My mother, who died too young, believed that everyone, regardless of their means or position in life, had the ability to make life better or easier for someone else. She taught me to be strong but humble, to be selfless and generous. My parents never turned away anyone who needed their help, and they dedicated time and support to their church and community. For Judge Singas, this example instilled a lifelong sense of duty to others, no matter who they were.

Hellenism and Orthodox Christianity were strong and influential presences that figured prominently during Singas’ formative years.

“My Greek-American upbringing was very important to me and defined me.” She said in a 2015 interview with NGTV. She attended St Demetrios Greek Orthodox Cathedral School in Astoria until eighth grade and continued at Bronx High School of Science.

She completed her undergraduate studies at Barnard College, Columbia University in New York, then enrolled at Fordham University School of Law, earning a Juris Doctor in 1991.

But it was her peers at St. Demetrios School in Astoria, where she was in bands like GOYA and Maids of Athena, who are still her closest friends today. And the importance of its Greek Orthodox upbringing and community is as strong as it has ever been.

“I got married in the church where I was baptized and I also baptized my children in this community. Today, my children go to Greek school and play sports through the church. In fact, they play sports with my classmates’ children! This sense of ethnic pride, of belonging, was solely the result of my upbringing,” Judge Singas proudly rejoiced.

Singas served as a prosecutor in Queens for 15 years before joining the Nassau District Attorney’s Office in 2006. She specialized in domestic violence, sexual abuse, and narcotics cases, and served as Deputy Chief Prosecutor of Nassau.

As the county’s Chief Assistant District Attorney, she oversaw the prosecution of approximately 30,000 criminal cases each year and helped design and implement many innovative programs in cases involving teenage offenders, ex combatants and people with mental illness or addiction.

Despite all her pioneering work and accomplishments, Justice Singas remains true to her humble roots, rooted in the Orthodox and Hellenic Christian values ​​instilled in her by her parents and community.

She says one of her proudest moments was watching the contentment of her father, “an immigrant with limited knowledge of our justice system, sitting in the courtroom proudly watching his daughter on trial, knowing that his hard work for his family had paid off.”

“Be proud of your heritage and respect everyone,” Judge Singas urged.

The significant personal meaning of Greek Orthodoxy for Judge Singas was evident from her earliest moments on the bench of New York’s highest court. Calling on Bishop Elpidophoros to open the investiture ceremony with prayer, Chief Justice Janet DiFiore remarked, “I know Justice Singas is very moved by the presence of the Archbishop here today.”

While praying, His Eminence asked that God grant the Judges grace and wisdom, and enlighten them with enlightenment for the people, just as He inspired the Judges of Israel and the Prophet-King Solomon.

“May they persevere in justice and righteousness…so that they may always render sound and just judgments for all,” the Archbishop concluded, standing before the seven judges in black robes, his own flowing black robes reflecting theirs; a tacit affirmation of their deep duty: to render justice in love and mercy, compassion and understanding.