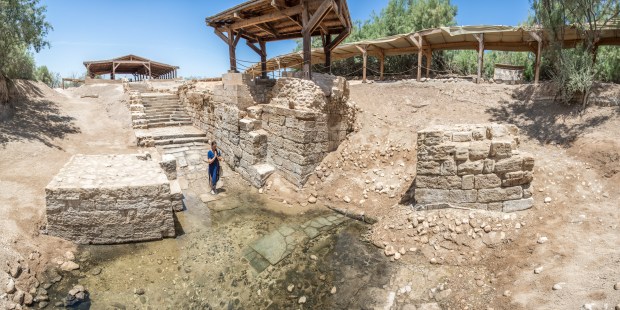 From the ruins of the old Church of St. John the Baptist to the “new” church atop Mount Nebo, Jordan is home to some of the most interesting and beautiful churches in the Middle East.

The Jordan Trail is a 700 kilometer hiking route linking all of Jordan, from north to south. It is the Holy Land equivalent of the Camino de Santiago or the Via Francigena, but with one important difference: while the Camino covers a number of medieval routes associated with one of Jesus’ apostles (namely, James the Great,) the Jordan Trail spans over three thousand years of biblical tradition and history and includes a significant number of holy sites for all Abrahamic faiths.

The trail begins (or ends) at the shores of the Red Sea. It follows the path which tradition claims to have taken by Moses, passes through the areas in which the prophet Elijah lived and ministered, reaching the site of Jesus’ baptism and the places where John the Baptist preached and was martyred. For those who don’t hesitate to combine pilgrimage, devotion, adventure and even a healthy dose of extreme sports, the trail is a dream come true. On foot (although mules, jeeps, camels and other means of transport are available in different parts of the trail), the ideal complete route takes at least 40 biblical days – enough time to pass through 52 villages, four different types of landscapes (from cold deserts of red sand to fertile green valleys with thermal waters), and several ancient pilgrimage and trade routes.

Considering how deeply Jordanian history is tied to biblical tradition, it’s no wonder these roads are full of the ruins of ancient biblical cities, or are mostly paved with the remains of early Christian Byzantine basilicas, such as those at Tel Mar Elias, Umm Al Jimal, or the impressive Church of St. Stephen at Umm Al-Rasas, which even includes a stylite tower. Some other ancient basilicas are still in use and have been carefully rebuilt, preserving most of its original mosaics and decorations. They are among the most impressive, oldest and most interesting churches in the Holy Land. Here we wanted to share some of the most important ones, which you must visit on your next trip to Jordan.

Biblical tradition (as well as extra-biblical sources) maintains Moses traveled all over the Jordan, from the shores of the Red Sea in the south, all the way north to Mount Nebo. Deuteronomy recounts how Moses ascended to the top of the mountain, where “the Lord showed him all the land—from Gilead to Dan, all Naphtali, the territory of Ephraim and Manasseh, all the land of Judah as far as the Mediterranean Sea. , the Negev and all the region from the Valley of Jericho, the City of Palms, to Zoar”, then died there, “in Moab”, that is to say the Jordan of today.

The burial place of Moses, continues Deuteronomy, is unknown. But a monument at the top of Mount Nebo commemorates his death after seeing the whole Jordan Valley: a sculpture by the Italian artist Giovanni Fantoni, representing the brass serpent of Moses and the cross of Jesus (Cf. Numbers 21, 4 -9) The carving is recent, but the place has been a destination of pilgrimage since the 4th century: a Byzantine-era Christian church once stood here, and its richly ornamented mosaic floor and columns are still preserved in the new and sober new church – the “Modern Memorial of Moses”.

During the excavation of the old church (between 1933 and 1938), the basilica, its various chapels and the annexes of a monastery which had been built in the mountain were brought to light. It was then that the exquisite mosaics that can be seen today were first discovered, and a sustained effort to preserve them began, until the new modern basilica was completed in 2007. And even though the complex was finally fully reopened to visitors in October 2016, the place was visited by Pope John Paul II and Benedict XVI during their visits to the Holy Land in 2000 and 2009 respectively.

2.- Early and Modern Churches of Saint John the Baptist

Al-Maghtas (meaning “immersion” and, by extension, “baptism” in Arabic) is the name given to the place considered since Byzantine times as the place of origin of the baptism of Jesus. It is also the region in which John the Baptist lived and ministered, and where tradition claims that the prophet Elijah was taken up into heaven. Al-Maghtas, also known as Bethany-Beyond-the-Jordan, is clearly thick with layers upon layers of biblical references, lore, and thousands of years of history. It is natural that there are not one, but two churches dedicated to Saint John the Baptist: the remains of an old, Byzantine, and a “modern”.

Located on the eastern bank of the Jordan River, just nine kilometers north of the Dead Sea, the site consists of two large areas. One of them is Jabar Mar-Elias, “the hill of Elijah”. This is the place from where tradition claims that Elijah was taken up to heaven in the 9th century BC. The scriptures say that Elijah would return before the coming of the messiah, so when John the Baptist started baptizing people in the area, the villagers came to ask if he himself was the messiah or not. The two biblical figures are therefore intimately linked to each other. One of the many caves near the baptismal site is said to be the one in which John himself lived. A monastery was built around it in the 5th century. Indeed, it was the first monastery on the eastern bank of the river.

The other area, closer to the river, is that of the baptism site itself. This is where archaeologists found the ruins of the First Church of John the Baptist, a major Byzantine church and monastery, built during the reign of Emperor Anastasius (491-518). According to historical sources, the church was once considered the most notable memorial church of St. John the Baptist on this side of the river. Around the site itself, in addition to the modern Baptist Church, there is also the Residence of Russian Pilgrims, its church being profusely adorned with impressive Orthodox icons.

Half an hour south of the Jordanian capital, Amman, lies Madaba. Throughout history, the city belonged to the Moabites, Nabataeans, Romans, Byzantines, Rashiduns and Umayyads. It is now home to the largest Christian community in all of Jordan, proportionally: Catholics and Greek Orthodox make up around 10% of the city’s total population.

Archaeologists claim that Madaba has been inhabited since the Middle Bronze Age. In fact, it is mentioned twice in the Bible: once in Numbers 21:30 and once in Joshua 13:9. The city was then at the very borders of the Moabite empire. But during Roman (and therefore Byzantine) rule, it belonged to the larger Arab province, founded by Trajan to replace the Nabataean kingdom. It was during these centuries, from the 2nd to the 7th century, that the Christian community of the city was established. Indeed, we already find “Medaba” mentioned as an episcopal seat in the acts of the Council of Chalcedon, in the 5th century.

The Greek Orthodox Church of St. George in Madaba is home to some of the region’s finest icons. But it is also the location of the most intriguing (and revealing) map of the Holy Land: the legendary “Map of Madaba”, an intricate mosaic dating from the 6th century, the oldest cartographic representation of the Holy Land preserved until daylight. It covers most of the region, from Lebanon to the Nile Delta, from north to south, and from the Mediterranean Sea to the Eastern Desert, from west to east. In it, more than 150 cities, towns, cities and places of interest are presented, including exceptionally intriguing symbols that some archaeologists believe represent places of pilgrimage.

This content has been brought to you in partnership with the Jordan Tourism Board.