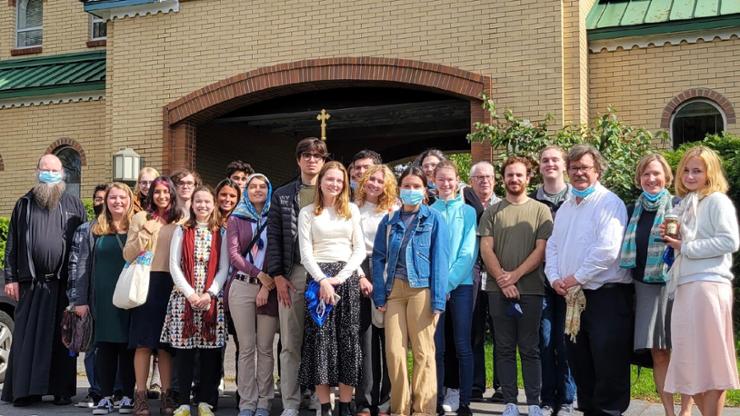 Office of Communications student writer Libby Militello ’22 was among students in two classes who recently visited the Holy Trinity Monastery in Jordanville to gain insight into Russian Orthodox traditions. She describes the visit here.

The interior of a Russian Orthodox church is meant to deeply engage the senses, keeping devotees away from earthly troubles and distractions. From observing the colorful frescoes lining the walls to the smell of fragrant incense filling the air, my classmates and I learned firsthand some Orthodox traditions on a trip to the Holy Trinity Monastery. in Jordanville, NY, just 30 miles from the Hamilton campus.

Students in my Russian Civilization course, taught by government professor Sharon Rivera, traveled with Prof. John Bartle’s Russian class to Holy Trinity last weekend to experience one of the most influential parts of the world. Russian culture: Orthodox religious tradition.

My class particularly focused on icons, or sacred artistic renderings used in religious devotion. Upon entering, I was amazed by the totality and detail of the iconography of the church. One of the defining aspects of Orthodox churches is the iconostasis, a wall of icons depicting key figures and elements of the faith that was historically used to communicate religious principles across the barriers of literacy.

Because this wall is located between the main body of the church and the altar, the iconostasis has been called the â€œwall that separates two worldsâ€. Although we discussed this belief in class, seeing this barrier and its stunning images in person deepened my understanding of the value of iconostasis in connecting devotees to the divine realm.

After a visit to the church, our classes were guided by a guided tour of the monastery icon and artifact museum, once again adding visual context and historical background to my understanding of religion in Russian culture. Our guide also explained the history of Holy Trinity, including its role as a center for publishing Russian Orthodox literature during the Soviet period, when religious life was in conflict with the government’s state atheism policy.

Our trip to the Holy Trinity not only provided a refreshing break between lectures and readings, but also allowed us to witness the traditions that have shaped Russia for centuries. It has been a privilege to learn through first-hand experience about Orthodoxy and its history, both around the world and here in central New York City.

Notice board | Bulletin board