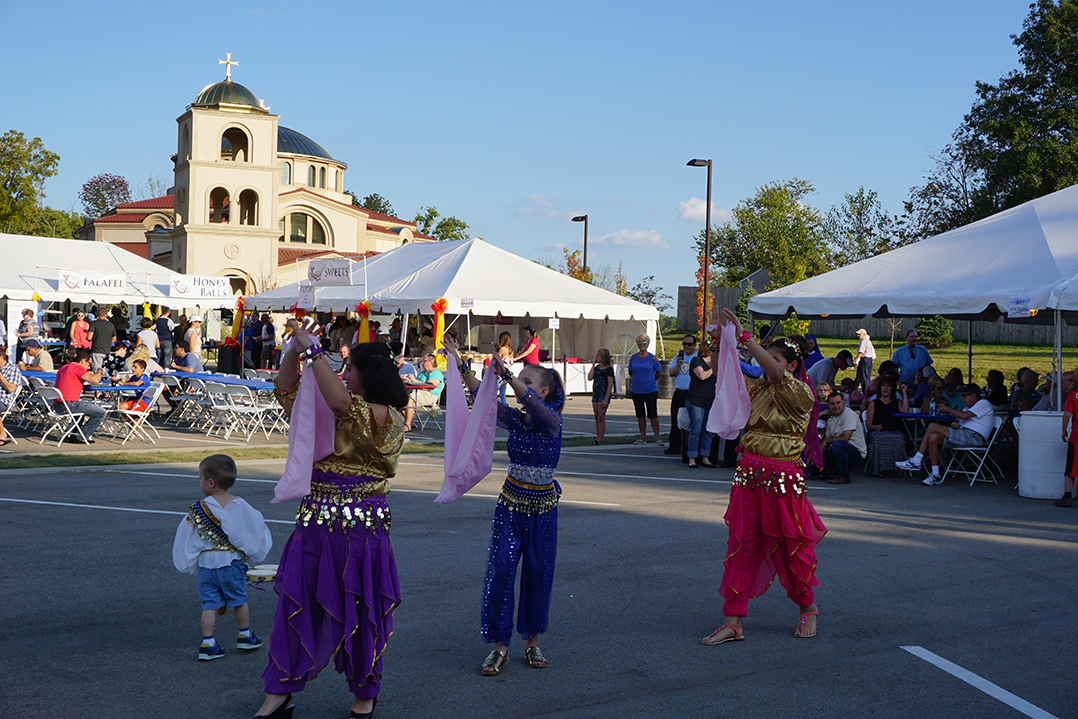 What started as a small smorgasbord of women’s churches at St. George’s Orthodox Christian Church in Fishers has since grown into a popular festival that attracts thousands of people.

The festival celebrates the Middle Eastern roots of the Orthodox Christian denomination. The church also invites those unfamiliar with the denomination and culture to take a look inside the gold-domed building on 116th Street.

Founded in 1926, St. George was one of the first Syrian churches in Indianapolis. According to arabindianapolis.com, the church’s goal was to hold “an Easter service in the city’s first and only Syrian church.” At the time, the church needed to raise $15,000 to open its own Orthodox church. Their first church was located at the site of the current Lucas Oil Stadium. And the road to its founding was not an easy one, but the church’s long history is part of what makes celebrating the festival so special, said Edward E. Curtis IV, professor of religious studies at IUPUI.

“Although St. George is now a multi-ethnic church, the festival honors Syrians and Lebanese cultural heritage of its Arabic-speaking founders – their food, dance, music, poetry and commitment to establishing an Arab community Orthodox Indianapolis Church, Curtis said. “It is important to remember these pioneers, who showed us how, a hundred years ago, it was possible to be Arab, Christian and American at the same time. They prove that Indiana has always been diverse.

The church moved to Fishers in 2013, where it holds services and hosts the annual festival. Today, the parish is more diverse, but when it was established, it sought to provide a safe space for immigrants from the Middle East in Indianapolis.

Riyadh Bannourah, the president of St. George’s Middle East Festival, has attended the church since 1982, when he first arrived in Indiana from his home in Bethlehem, Palestine. Bannourah has been president of the festival since 2017. He said he has seen the church and the festival grow during his participation.

“Our community is growing. From a hospitality perspective, we welcome them (new people) to our facility, sharing our tradition of food, music and culture,” he said. “And of course we do a church tour and we talk about the ancient church in Antioch, which is our mother church in Syria.”

Reverend Anthony Yagaze, pastor of St. George, is delighted to welcome people to the festival.

“(My) favorite part of the festival is welcoming all the visitors who come here,” Yagaze said. “It’s also a wonderful time for us as members of the parish to just be together and serve others, because that’s really part of the heart of our Christian life, it’s showing the love of God to others through our hospitality.”

Bannourah said the festival is a good way to shed light on Middle Eastern culture.

“It’s about understanding what the Middle East is and where we come from,” he said. “We try to pretend that we are peaceful people, Christians and Muslims. Not all Muslims are bad. We want to make sure everyone understands that. We live in harmony and peace, so that’s what I want everyone to take away from this festival – that we bring people together, share our tradition with them and give them comfort that we are a community very peaceful and loving.

IF YOU ARE GOING TO

Entrance to the festival is free. A dozen traders will be on site. Activities include live music, dancing, a market, church tours, a silent auction, traditional Middle Eastern dishes and desserts, beer and wine, and a children’s area with bouncy castles.