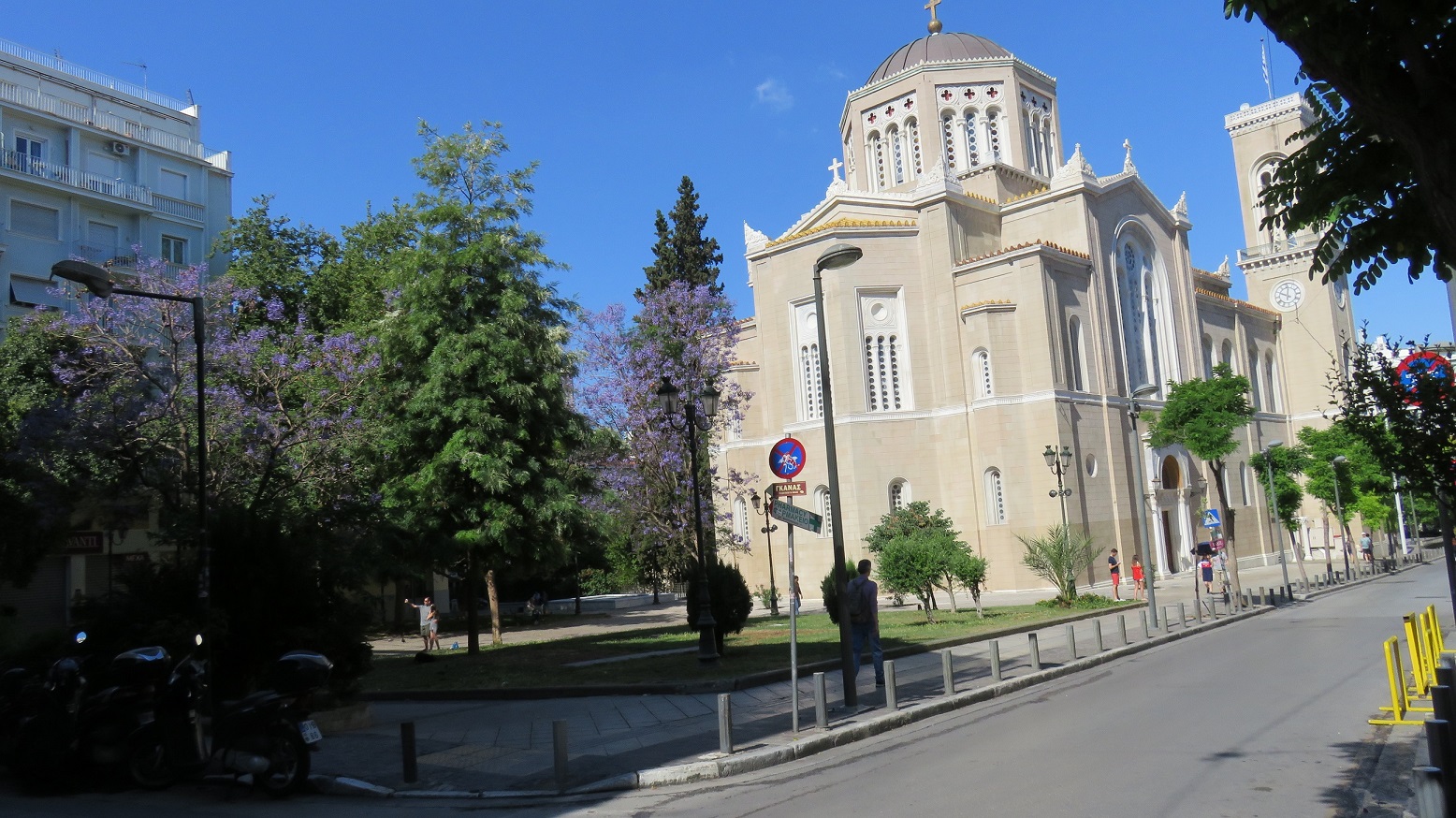 Souvenirs from Greece: Athens Metropolitan Cathedral of the Annunciation

On a pre-covid 19 summer day, I explored the deserted streets of central Athens. I passed through a typical urban center. Suddenly I came across an immaculate plaza with a statue of the last emperor of the Byzantine Empire Constantine XI Dragases Palaiologos. It was the only statue I saw of the last Byzantine emperor in a major Greek city. Architects and the monarchy remembered their Byzantine roots. The second is a statue of Bishop Damaskinos who was Archbishop of Athens during WWII and was Regent for King George II and Prime Minister of Greece in 1946. I was at the Metropolitan Cathedral of the Annunciation (Theotokou). The cathedral was closed. But the statues. icons on the entrances and architecture gave insight into the national significance.

Zorba renowned composer Mikis Theodorakis had a public funeral at the cathedral on September 6e-8e. The Metropolitan Cathedral remains a major landmark in Athens and the site of important ceremonies with national political figures in attendance, as well as weddings and funerals of notable figures.

Construction of the cathedral began on Christmas Day 1842 with the laying of the foundation stone by King Otto and Queen amalia. Construction began under architect Theophil Hansen and was continued by Dimitris Zezos, Panagis Kalkos and FranÃ§ois Boulanger. Workers used marble from 72 demolished churches to build the immense walls of the cathedral. On May 21, 1862, the completed cathedral was dedicated to the Annunciation of the Virgin Mary (Î•Ï…Î±Î³Î³ÎµÎ»Î¹ÏƒÎ¼ÏŒÏ‚ Ï„Î·Ï‚ Î˜ÎµÎ¿Ï„ÏŒÎºÎ¿Ï…) by the king and the queen. The three naves, in the shape of a dome Basilica has inside the tombs of two saints killed by the Ottoman Turks in the Ottoman era: Saint Philothea and Patriarch Gregory V.

The month of September 2021 commemorates the 99e Anniversary of “the fire of Smyrna” and end of 3000 years of presence of the Greeks in Asia Minor. Metropolitan Chrysostomos Kalafatis of Smyrna, canonized as Saint Chrysostomos for his martyrdom, worked in the cathedral. In a moving speech, he spoke to the cathedral community “of the dawn of the resurrection of the whole nation”.1 Like Byzantine Emperor Constantine XI Dragases Paleologus, Metropolitan Chrysostom did not desert his community, when the defeated Greek army withdrew, leaving civilians to the atrocities of an enraged Turkish militia. His torture and barbaric death are graphically recorded in Greek media from September 2021.2 Western governments watched, did nothing, leaving civilians to be exterminated. Private, non-governmental people rescued some of the survivors.

Who was the Byzantine Emperor Constantine XI Paleologous Dragases the man? One overlooked point in general history is that the last emperor of the Byzantine Empire, Constantine Paleologus, was half-Serbian. His mother, Helena Dragas was the daughter of Serbian tycoon Constantine Dragas. When he became emperor, he called himself Constantine XI Dragases Palaiologos after his mother Helena. 2021 tennis champion Novak Djokovic gives a glimpse of the Serbian character. Novak Djokovic said: â€œWe have a harder way to be successful in life as Serbs because of the past we had and because of the history we hadâ€¦Before being an athlete, I am an Orthodox Christian.“

The Byzantines were multinational in character, like the United States, united by Greek Orthodox language, culture, and faith. Emperor Constantine died in action defending Constantinople. After his death he became a legendary figure in Greek folklore under the name of Marmaromenos Vasilias, “the marble emperor” who would awaken and reclaim the Empire and Constantinople of the Ottomans. His death marked the end of the Roman Empire which lasted for 1,100 years.3

Constantine XI was the most capable, charismatic and courageous of the sons of the Byzantine Emperor Manuel II. He was keenly aware of the long and glorious history of Byzantium. He was determined to defend his dignity. Constantine XI regarded appeasement as another form of betrayal. The last Byzantine emperor would not be humbled in the eventual destruction.

At 43, he had spent half of his life fighting the Turks. He knew his enemy well. He faced the big guns of the Ottomans in his fight to save Athens. He lost and retreated. It was the age of the cannon. Unfortunately, he didn’t have the money to irritate Urban, the Hungarian gunmaker. Urban went to the Ottomans and created 2 huge cannons. Constantine XI knew that the fate of Byzantium was sealed. Yet he fought.4

Imperial ministers pleaded with Constantine to flee and set up a government-in-exile until the city was recaptured. Exhausted but firm, Constantine refuses. They were his people. The emperor would be with them until the end. His funeral oration during the last Greek Orthodox service at Hagia Sophia reminded his soldiers of their glorious history. â€œAnimals can run away from animals, but you are men,â€ he said. â€œYou are the worthy heirs of the great heroes of ancient Greece and Rome.5

In the end, from his position near the Porte Saint-Roman, Constantine knew that all was lost. With the cry, “The city is lost, but I saw, he threw down his imperial insignia and plunged into the breach wall, disappearing into history.” The body of Constantine XI has not been found. In death, if not in life, Constantine XI had escaped the grip of his oppressor. The shocked and shattered Byzantines were now in permanent exile. But they could reflect that their empire had met a glorious and heroic end.

Constantine Dragases Paleologus preferred death to surrender or a diminishment of his ideals. He had found a mass grave among the men he was leading. Proud and courageous, the 88e emperor of Byzantium has come full circle of empire. As the first (Constantine the Great) to rule the city by the Bosphorus, he had been a son of Helena named Constantine, the founder of Constantinople. It’s the factual Constantine Dragases Palaiologos who comes to life in Lars Bownworth’s unique masterpiece Lost To The West: The Forgotten Byzantine Empire That Saved Western Civilization.6

Mikis Theodorakis’ image to this writer was negative. My point of view changed on March 16, 2018 during the gathering of 1.5 million Macedonians in Athens, sponsored by the Federation of Hellenic Societies of Greater NY, the Pan-Macedonian Association of the United States and the Hellenic American Congress, regarding the opposition to any use of the word Macedonia in negotiations between the governments of Greece and FYROM (now North Macedonia). Dimitris Filippidis, journalist / Hellas FM radio / president of the Pan-Macedonian Association of the United States, explained in broadcasts that the left-wing faction had gone to Theodorakis to change his mind. His house was destroyed with negative graffiti, all to persuade him not to attend the 2018 rally.

Theodorakis wheeled through the crowd, to show that he was a Greek patriot. A man of contradictions, Theodorakis demonstrated that he was first and foremost a patriot and fought for Greece. I changed my perspective based on Mr. Filippidis’ positive portrayal of the composer who said his country came first. The Athens Metropolitan Cathedral of the Annunciation is a monument to the great men who are part of the history of Greece.