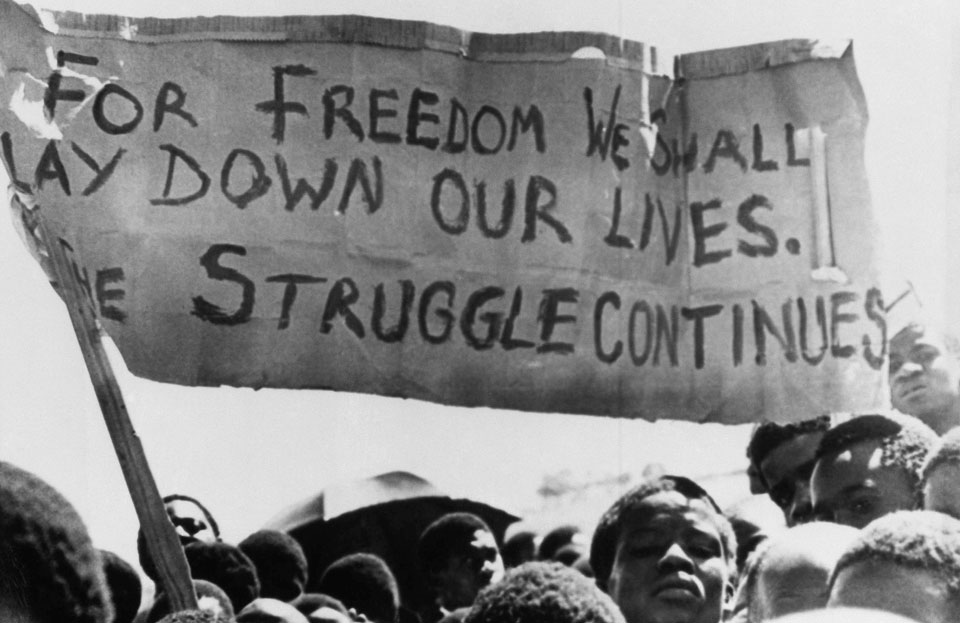 A banner is held up by students in Johannesburg, South Africa’s Soweto Township, October 18, 1976. | PA

Thirty years after the fall of apartheid in South Africa, two generations have now grown up without knowing firsthand the expansive and united movement that helped end the racist regime. The recently published book International Brigade Against Apartheid: Secrets of the People’s War that Liberated South Africa takes a closer look at the international solidarity that helped shoulder the brunt of the overthrow of apartheid.

This collection, edited by the indefatigable Ronnie Kasrils – former executive of Umkhonto we Sizwe (MK), the armed wing of the African National Congress (ANC) and former minister of the post-apartheid government – is composed of contributions from comrades -same members of the struggle. Contributors come from other southern African states as well as from Europe, North America, Palestine, Oceania, Asia and, above all, from the former socialist bloc. The tome is divided into two parts: first, the accounts of the underground struggle (mainly MK); then the broad anti-apartheid movement (AAM).

With over 300 pages and 64 separate articles, this collection is absolutely brimming with struggle, sadness, stress, triumph, questions and life. Readers may find it hard to follow at first, until the rhythm settles and a grand narrative begins to take shape. And what is actually taking shape is an amazing and powerful movement that shook the world, shook the most powerful governments of the time (Reagan in the US, Thatcher in the UK, Mulroney in Canada, etc. ) and gathered tremendous energy and solidarity. .

Contributors include several average people who chose to enlist in MK and participate in crucial ways to support the armed struggle: smuggling weapons across borders, building weapons caches, maintaining safe havens, and more. Others describe the struggle in other nations to raise awareness of the crimes of apartheid and mobilize resources for the struggle.

The struggle to get the labor movement on board was particularly important. Writing from Canada, for example, Domenic Bellissimo sheds a very instructive light on this issue, pointing to the timid approach taken by unions affiliated to the International Confederation of Free Trade Unions. Despite this curb on Canadian union solidarity, grassroots activists quickly found ways to challenge management and build strike funds for South African unions, participate in information campaigns and much more. Some unions also respected the boycott, refusing to transport South African goods, and generally resisted red-baiting which was the quintessential libel against anti-apartheid activists.

It would be wrong to overlook the support of the socialist bloc, especially the German Democratic Republic and the Soviet Union, which offered support that simply could not be found elsewhere. Training in military strategy, counter-surveillance, underground work, etc., was never offered, even by the most progressive governments in Scandinavia, who themselves offered generous funding to the ANC . Soviet and other socialist specialists provided most of the advanced training that MK and the ANC needed to succeed in their task of militarily challenging white supremacy.

Today, the term “apartheid” is still well known in relation to South Africa, but has taken on new meaning in the struggle to pit Israeli apartheid against the Palestinians. Indeed, the Palestinian boycott-sanctions-divestment (BDS) movement was largely influenced by a similar tactic in the original anti-apartheid movement. This book illustrates quite well why this tactic was adopted and what kind of movement Palestinian solidarity activists are trying to build. Those involved in the BDS movement would likely benefit from the context developed in this book. That said, we can all learn from the struggles of those who came before us.

The back cover states that the volume “reads like a wartime thriller” and it’s not wrong! But it’s more than that: it’s an education in international solidarity, in building unity, in working together, in what it takes to face a monster and win. Although many contributors express their disappointment with the current situation in South Africa, this does not detract from their courage and dedication to a worthy ideal.

International Brigade Against Apartheid: Secrets of the People’s War that Liberated South Africa

‘I’m always looking over my shoulder’: the anxiety of Russians in Estonia | Estonia