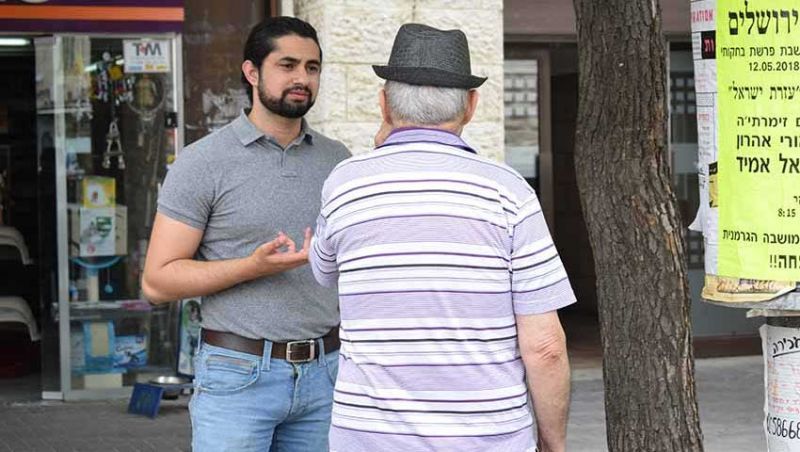 Should Christians in Israel Avoid “Offensive” Evangelism of Jews?

As the end of the pandemic brings more Christians back to Israel for visits to the Holy Land, should they evangelize the Jewish people when they visit?

That’s the question raised in a Jerusalem Post report on the return of Christians to Israel to mark the biblical Feast of Tabernacles, or Sukkot, earlier this month after COVID-19 restrictions were lifted.

It is estimated that more than 2,000 pilgrims from 70 nations would travel to Jerusalem from October 9 to 16 for the celebration, which was sponsored by the International Christian Embassy in Jerusalem (ICEJ), according to the news outlet.

But as the rally heralded the return of Christian tourism to Israel post-pandemic, some Jews, like Israel365 founder Rabbi Tuly Weisz, seem ambivalent about the trend – which for them also means the return of evangelization in the Holy Land.

According to Weisz, while non-Jewish tourists should be “warmly welcomed” to “get closer to the true fulfillment of Sukkot,” he appeared less welcoming to the evangelical practice of sharing the gospel with Jewish people.

“Unfortunately, some of the Christian visitors hope to use their time in the Jewish state to engage in missionary activity,” he wrote. “The International Christian Embassy in Jerusalem (ICEJ) is doing its best to prevent this, warning its guests to refrain from such offensive behavior.”

Weisz pointed to several Christians who expressed opposition to missionary activity while visiting Israel, including David Swaggerty, senior pastor of Charisma Life Ministries in Columbus, Ohio, who was among those in Israel for the celebration.

Swaggerty reportedly said, “As a Christian who believes in the Great Commission, I think the call to spread the gospel does not apply to the Jewish people. Especially in light of centuries of Christian anti-Semitism, I am here to support Israel unconditionally. and without any conditions.”

In an interview with The Christian Post, Swaggerty clarified that while he has no problem taking the gospel around the world at ministers’ conferences in faraway lands like Thailand and Tanzania, when he is in Israel, it’s a different story.

“When I go to Israel or with my Jewish friends to Columbus, the mission is not an option,” he said. “I don’t do that. I don’t believe it’s God’s will for my life to do that.”

Acknowledging that some — if not many — of his peers would disagree with his approach, Swaggerty said he doesn’t mind.

“They think you should convert everyone you meet, but I don’t see it that way,” he added.

Swaggerty said the Jewish people held a special place in his heart: As a teenager, he worked in a jewelry store where he was surrounded by “a dozen Jewish men who became my family.”

He said he also saw how they were treated by Christians who tried to evangelize them and, as Swaggerty put it, “almost force them to convert”.

“I don’t think it’s my responsibility. My vocation is to build bridges of trust and friendship between the Jewish people and Christians,” he added. “In doing this, I pledge to myself and to my followers, my congregation, not to mission the Jewish people.”

What about the messianic passages of the Old Testament, like Isaiah 53, which most Protestant theologians consider fulfilled by Jesus at his first coming?

For Swaggerty, whose ministry statement of faith affirms Christ’s death and resurrection, it is “no use fighting over whether he came once or not at all” because “when he comes he will not there will be no doubt who he is.”

“One day Israel is going to see the Messiah. They pray for him all the time, and one day he is going to show himself, and when he does, the whole land of Israel, the whole nation, is going to embrace him. than Messiah,” he explained.

While it’s unclear whether groups like the ICEJ — which didn’t respond to a CP request for comment — are discouraging Christians from evangelizing in Israel, Swaggerty said he’s been arranging several Earth visits. Holy and would warn people not to proselytize.

Now, he says, after attending this year’s Feast of Tabernacles with Weisz, he believes a new interfaith movement is afoot.

“What we’re seeing on a much larger scale…is like a spiritual phenomenon happening around the world between Orthodox Jews and Evangelical Christians, where they’re ready to walk across the aisle,” he said. .

“We find that when you build relationships of trust, we can work together because we serve the same God.”

But for Messianic Jewish author, radio host and columnist Michael Brown, such an approach to evangelism is a “terrible disservice” to the Jewish people.

“All Jewish believers I know urge Christians to share the Good News with our people,” Brown told CP. “It is the least loving thing you can do to withhold the water of life from a Jewish person. Jews and Gentiles are saved in exactly the same way. It is through faith in Jesus, through his death on the cross.

“And without it, there is no salvation.”

As a self-identified “Jewish believer in Jesus,” Brown said he believed it was “heretic” to exclude Jews from the Great Commission.

“I appreciate the sensitivity. I appreciate recognizing that for many Jews, Jesus is a dirty word. I appreciate that Jewish identity and the preservation of our people is important,” he said. . “But faith in Jesus will improve that rather than take it away.”

Instead, Brown added, the Bible teaches that for Israel there will be a national turn to the Messiah at the end of time.

Although Brown agreed that Christians visiting Israel should “recognize that they are not here to save Israel, they are here to see the country,” he also said believers should not go out of their way to avoid to share the Good News.

“If providentially they meet someone and can share the Gospel, that’s wonderful. But they’re not here to cold-shoulder into the country and annoy people going about their daily business,” he said. he declares.

“But if you’re in a taxi and you’re there as a Christian and you have the opportunity to share, do it! Why not? Why hide the news of the Jewish messiah from the Jewish people?”

Before the pandemic, Christians accounted for 55% of all tourism in 2019, according to data cited by The Jerusalem Post. More than a quarter of those visitors identified themselves as evangelicals.

Ian M. Giatti is a reporter for The Christian Post. He can be contacted at: [email protected]

Join thousands of others to get the FREEDOM POST free newsletter, sent twice a week by The Christian Post.

1953-1957: China implements the first five-year plan with the help of the Soviet Union, including the financing of 156 major industrial projects in China | National

A journey through war-torn Ukraine