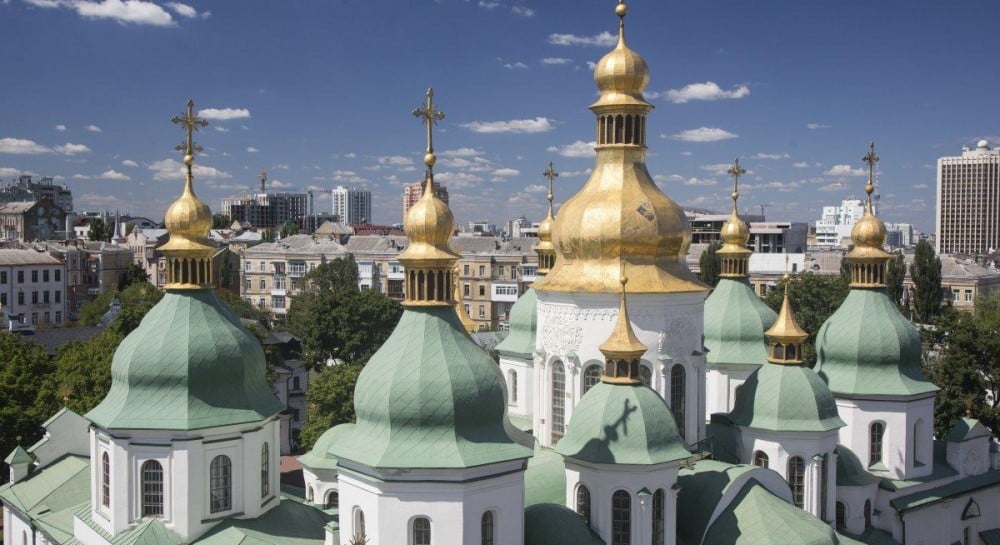 Service held at Saint Sophia Cathedral in Kiev to mark 1,031 years of Christianization of Kiev Rus-Ukraine

The event was attended by the representative of the Ecumenical Patriarchate, His Eminence Metropolitan Emmanuel of Gaul.

A church service was held at St. Sophia’s Cathedral in Kiev to mark 1,031 years of Christianization of Kyivan Rus-Ukraine.

It was conducted by Metropolitan of Kiev and All Ukraine, Primate of the Ukrainian Orthodox Church Epifaniy (Epiphanius), according to a UNIAN correspondent.

The high altar was placed in front of the entrance to the main building of the cathedral.

The number of members of the Orthodox Church and the clergy was limited in the territory of the cathedral.

Most of the church members who came to attend the service gathered in the square near the cathedral.

In addition to the Ukrainian clergy, the event was also attended by the representative of the Ecumenical Patriarchate, His Eminence Metropolitan Emmanuel of Gaul.

A solemn religious procession was planned after the service.

UNIAN memo. Kyivan Rus-Ukraine Christianization Day is a cultural milestone in Ukraine every year on July 28, the day church members honor Prince Volodymyr, a saint equal to the apostles.

In 988, the mass baptism of the inhabitants by Volodymyr the Great in Kiev, then in other cities, made Christianity the main religion of Kyivan Rus.