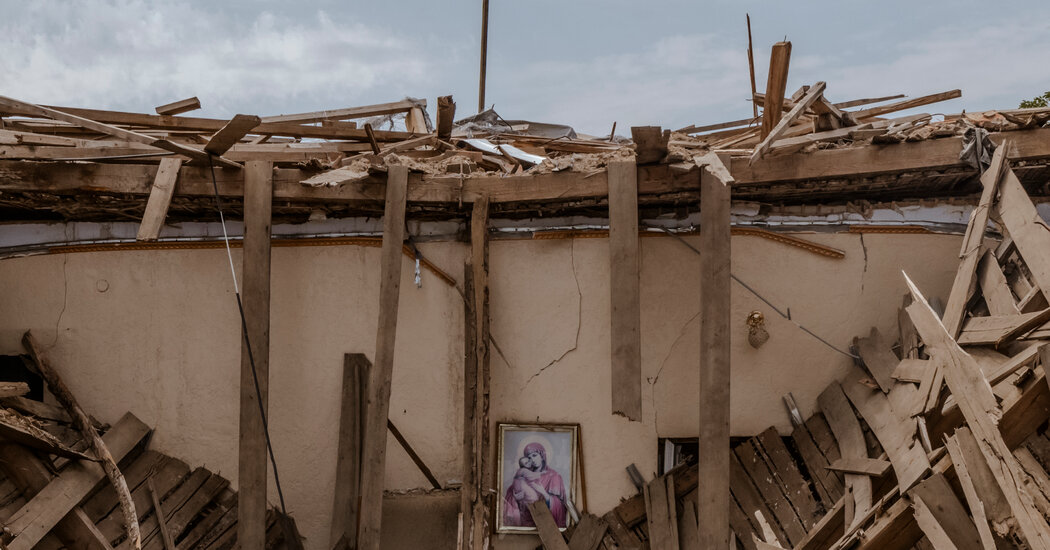 KYIV, Ukraine – Despite heavy casualties during nearly six months of war, Russia still holds a clear advantage over Ukraine in one-on-one combat with brutal artillery battles. The Ukrainian military is therefore seeking to wage the war on its own terms.

Supplied with a growing arsenal of long-range Western weapons and aided by local fighters known as partisans, Ukraine claimed to strike Russian forces deep behind enemy lines, disrupting critical supply lines and, more and more, hitting targets that are critical to Moscow’s combat potential. One of the blows dealt the Russians this week was a series of explosions at an air base on the occupied Crimean peninsula which a Ukrainian official said was the result of a strike carried out with the help of local fighters.

And on Saturday, the Ukrainians claimed to have rammed the last of four key bridges spanning the Dnipro River in southern Ukraine, leaving thousands of Russian troops further isolated and cut off from resupply, according to Western intelligence officials.

“Of course they will try to repair, look for an alternative to the crossings,” Serhii Khlan, adviser to the head of the Kherson region military administration, said in a Facebook post. “But it’s time, money, and as soon as they get ready and gain equipment and strength, we’ll destroy it again.”

It was the latest move in a campaign to retake southern territory that Russia had captured in the early days of the war, a push that the Ukrainians say is weakening Moscow’s forces to the point that they will be forced to retreat.

Ukraine’s change in tactics did not result in major territorial gains. But he managed to halt the Russian advance across the country and stem the heavy casualties Ukraine suffered in the spring, when up to 200 of its soldiers died every day.

The main Russian effort in eastern Ukraine is now focused on trying to gain ground in the Donetsk region, and there has been intense fighting in recent days in the area around the town of Pisky. The Russian Defense Ministry said on Saturday that the city had fallen, a claim that could not be independently verified.

Ukrainian Defense Minister Oleksii Reznikov said last week that both the US and UK defense ministers had given him advice: “The Russians are using meat grinder tactics – if you plan to fight them with the same tactic, we will not do it. be able to help you,” Reznikov said in an interview with Ukrainian media outlet Pravda.

“We don’t have the resources to litter the territory with bodies and shells, as Russia does,” he said. “Therefore, it is necessary to change tactics, to fight in a different way.”

Rather than engage head-on and try to beat the Russians with brute force, they employ a death-by-a-thousand-cut strategy.

Moscow’s control over Crimea, which Russia illegally annexed in 2014, is key to Russia’s efforts to hold onto land in southern Ukraine. Ahead of its full-scale invasion of Ukraine earlier this year, Moscow sent tens of thousands of troops to the peninsula, and they captured large swaths of the southern regions of Kherson and Zaporizhzhia within days.

Since then, rail lines from Crimea have been essential for Moscow to transport heavy weapons and equipment to southern Ukraine. Last week, Britain’s Defense Intelligence Agency said the Ukrainians had hit a key train line from the peninsula, making it “highly unlikely that the train link from Kherson to Crimea will remain operational”.

The Russians will likely rush to fix it, the agency said, but the attack highlighted a critical vulnerability.

Then on Tuesday, a series of explosions destroyed a Russian naval air base in Crimea, destroying at least eight Russian warplanes and dealing a severe blow to the naval aviation capability of Russia’s Black Sea Fleet, analysts said. Western military.

Whatever the cause of the explosions, they were not only a symbolically embarrassing episode for the Kremlin, but also underscored Russia’s vulnerabilities in the southern theater.

Vitaliy Kim, the head of the military administration in Mykolaiv, where the Ukrainian army is organizing forces for its counteroffensive, said the flexibility of its approach offered a distinct advantage.

“The Russians are working according to the rules, deploying combat formations as was planned in the Soviet Union,” he said in an interview last week. “Our guys have read this book and fully understand it, and use it for their own purposes.”