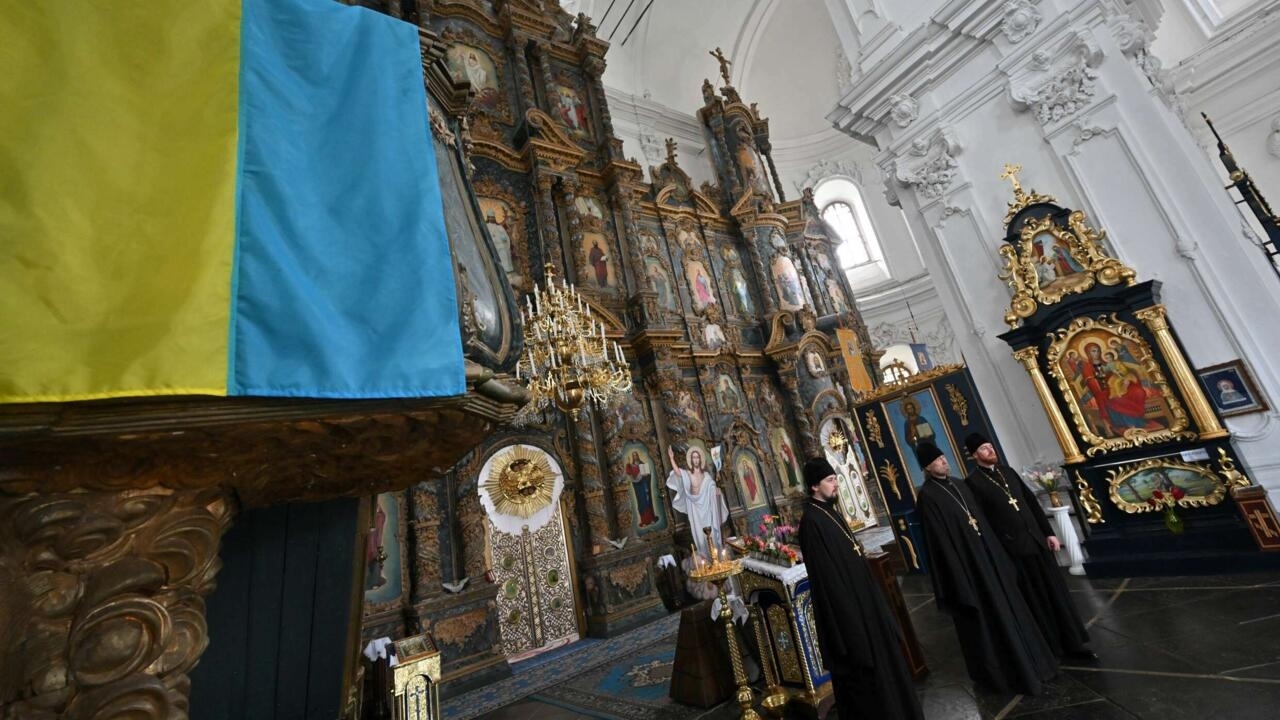 Kyiv (Ukraine) (AFP) – As war rages in Ukraine, Mykhaylo Tereshchenko is locked in his own spiritual battle that threatens to tear his parish apart.

The priest is lost. He is a member of the clergy of the Moscow branch of the Ukrainian Orthodox Church, which officially pledges allegiance to the Russian Patriarch Kirill.

But on the ground, Tereshchenko is a fierce Ukrainian patriot, shocked by the brutality of President Vladimir Putin’s invasion of his country.

“This war has brought nothing good,” Tereshchenko told AFP from his church in Kozelets, about 80 kilometers north of kyiv.

“It has brought us only grief, destruction and death.”

He sighed as he recounted the chaotic beginnings of the war, when he sheltered people fleeing nearby fighting in the church catacombs, among icons and the tomb of the parish founder.

“There are villages nearby where many people died and houses were destroyed. This pain is also ours,” the priest said.

Putin’s invasion has put Moscow-backed priests in Ukraine in a precarious position.

Russia lost a large number of Ukrainian parishes in 2019, when a historic schism fueled by the Kremlin’s land grab of Crimea and support for a separatist insurgency in the Donbass led to the creation of the Patriarchate of Kyiv of the Orthodox Church.

Today, with the large-scale invasion of Russia that Patriarch Cyril has aloud supported, the Russian Church is likely to lose even more clerics and parishes.

As waves of Russian forces swept into Ukraine, Kirill spoke out against “evil forces” opposed to historic “unity” between Russia and Ukraine.

Later, he urged his supporters to rally against Moscow’s “external and internal enemies”.

Kirill’s words led to Western calls for sanctions against him and a searing warning from his former rival in the Vatican, Pope Francis, to stop being “Putin’s altar boy”.

For Ukrainian priests like Tereshchenko, standing alongside their leaders in Moscow has become increasingly untenable.

But severing ties with the church also risks stirring up unrest among their own congregations.

Patriarch Kirill’s apparent blessing for Putin’s invasion has infuriated Ukrainians, where millions have fled their homes and the civilian death toll is rising daily.

“It’s hard to believe what the patriarch said,” Tereshchenko bristled.

“Ukrainians, Russians and Belarusians. We are all Slavs. And yet he gives his blessing to go and kill his people.”

Some of his religious colleagues in the Moscow church have gone further, with hundreds signing an online petition calling on Patriarch Kirill to appear before a religious tribunal.

The head of the Moscow-backed church in Ukraine, Metropolitan Onufriy, has so far refrained from criticizing his patron.

But his social networks are full of burials of fallen Ukrainian soldiers and support for the kyiv army.

He had also called for an Easter procession to collect trapped and injured Ukrainian soldiers from the Azovstal factory in Mariupol, besieged by the Russian army.

Ukrainian priests who have already broken ranks with Moscow say Kirill’s message confirms what they have long said about Russian religious authorities and accuse him of blasphemy.

“The behavior and statements of Kirill the Patriarch are simply terrifying,” said priest Oleksandr Shmuryhin of St. Volodymyr’s Cathedral – part of the Orthodox Church’s Kyiv Patriarchate – in the Ukrainian capital.

“It’s propaganda and theology in the service of war. It’s not Christianity.”

Now some in Ukraine want the Moscow church outlawed altogether.

In March, a bill was presented to the Ukrainian parliament which, if approved, would formally ban the Russian Orthodox Church from operating in Ukraine and allow the seizure of its property.

In Moscow, the clergy hit back, saying it proved Putin’s “special military operation” was justified.

The rhetoric risks backfiring and costing them more priests in Ukraine.

Some Ukrainians have turned their backs on the Russian Church.

“All Ukrainians around the world must unite now and follow one mission: to help Ukraine in this victory,” said Daria Kolomiec, a 33-year-old Kyiv resident.

But Kirill, who hasn’t been to Ukraine since Moscow annexed Crimea in 2014, still has his supporters in Ukraine, even in the heart of kyiv.

“Yes, I have concerns,” Iryna Gen, a 34-year-old practitioner, told AFP, comparing Putin to “Satan” before a service at a Moscow Patriarchate church in Kyiv.

However, she insisted that “Kirill has no connection” to the Russian president’s actions.

But for priests like Tereshchenko, the war has forced them to confront difficult issues that have dragged on for years and an uncertain future.

“I want us to have our own Ukrainian church – independent from Moscow and any other state (including Ukraine),” Tereshchenko said.

“You can’t do anything with aggression, only with love.”