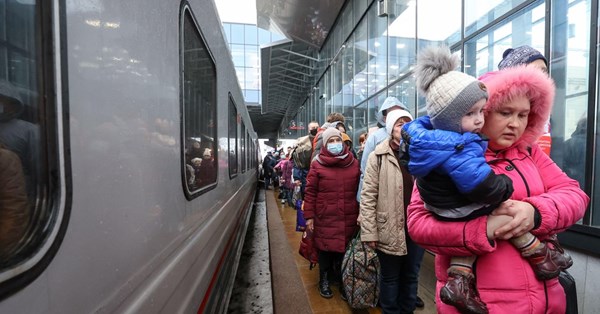 Religious leaders and charities seek to avert catastrophe in Ukraine

AID charities warned of a humanitarian catastrophe in Ukraine, as religious leaders in Europe continued to call for peace and an end to military confrontation (News, Commentary, February 18).

“The Ukrainian people have already endured eight years of armed conflict in the east, a largely forgotten conflict – more than 1.5 million people have been displaced, of whom around 2.9 million are currently in need of humanitarian protection,” the charity organization Caritas-Europe said in a statement. .

“A deterioration of political dialogue and a possible escalation of hostilities threatens to increase these needs exponentially, while rapid action is required to meet the already unmet humanitarian needs for access, food and non-food items and psychosocial support.

The call came as President Biden agreed to meet President Putin after talks scheduled in Paris this week between US Secretary of State Antony Blinken and Russian Foreign Minister Sergei Lavrov.

He said millions of Ukrainians would flee their homes if Russia invaded, triggering a “humanitarian catastrophe on a scale not seen in decades” and a “wider humanitarian emergency” in Eastern Europe.

Another group of charities said thousands of homeless Ukrainians were already dying every year from “hypothermia, heart attacks and frostbite”, and that tents, food and emergency medical aid were needed to help “combat an icy winter”.

“Tensions have continued to simmer over the past eight years, and the people of Ukraine have suffered the consequences as the economy has failed to recover – many of those who fled the initial fighting have faced the threat of destitution and homelessness, while the Covid pandemic has exacerbated the problem,” said Depaul International, a group of charities working with homeless and marginalized people.

“Unless the international community acts quickly to defuse the situation, thousands more will lose their homes.

Ukraine said on Monday it had recorded more than 100 truce violations in its eastern regions, amid an upsurge in heavy weapons fire.

Boris Johnson has warned that Russia is preparing “the biggest war in Europe since 1945”.

In Kiev, the Ukrainian Council of Churches and Religious Organizations, which called in late January for “a consolidated rebuff to the Russian aggressor”, called for a prisoner exchange and warned that a “terrible bloodbath” would leave an indelible mark for many generations.

The Primate of the Independent Orthodox Church of Ukraine, Metropolitan Epiphanius, has called on citizens to avoid debilitating panic and resist Russia’s ‘insidious aims’ of ‘intimidation, threats, lies and pressure’ .

In a Facebook post on Sunday, Metropolitan Epiphanius said Ukrainians should focus on “understanding and controlling” their fears, and remembering that “nothing in the world happens without the will of God”.

Mufti of the Spiritual Administration of Crimean Muslims Ayder Rustemov has urged Muslim soldiers in the Russian army to desert and return home. He warned that a war would force them to “fight Muslims defending Ukraine and their homes, families and honour”.

A well-known Pentecostal pastor and former Red Army soldier, Gennadiy Mokhnenko, who runs rehabilitation centers for orphans and drug addicts in Mariupol, also urged parents of Russian servicemen not to be “cheated by the bad guys in the Kremlin”. .

“My own children have seen the war on the front line from their bedroom for eight years – their whole childhood was a war,” Mokhnenko said in a post on the website. “Your sons could be thrown into a hellish massacre started by the Kremlin – and then even I, a pastor, will have no choice but to take up arms and defend my children.”

US sources said this week that up to 190,000 Russian troops were now deployed on Ukraine’s borders in 84 battlegroups, despite the arrival of US and NATO reinforcements in Eastern Europe, and have estimated that up to 85,000 soldiers and civilians could die initially on both sides in a full-scale war, according to Reuters news agency.

Ukrainian Greek Catholic Major Archbishop Sviatoslav Shevchuk, who chairs the Ukrainian Council of Churches and Religious Associations, told the Polish Catholic News Agency that he maintained “full faith” in diplomacy, but that the Ukraine was now “much better prepared” to defend itself than in 2014. .

The President of the Polish Bishops’ Conference, Msgr. Stanislaw Gadecki of Poznan, whose country currently hosts more than a million Ukrainian migrants and asylum seekers, called on citizens to “keep an open heart” in the face of a likely resurgence of refugees.

The All-Ukrainian Union of Evangelical Christian-Baptist Churches, which last week co-organized a visit to Kiev by Baptist World Alliance General Secretary Elijah Brown, distributed aid over the weekend to children in soldiers killed in past battles, and said in a statement that he was counting on God to “bless Ukraine, so that the plans of the devil and his minions are shattered”.

A churchwarden from Christ Church, Kyiv’s Anglican Chaplaincy, Christina Laschenko-Stafiychuk, said her small community had been “overwhelmed” with messages of “support and solidarity in prayer” from across the diocese in Europe.

“Of course we are afraid; but we are better prepared than eight years ago,” Ms Laschenko-Stafiychuk said in a message over the weekend. “Ukrainians have no other choice: this is our land, and we are ready to defend it, and to defend our identity.”

With war looming, will Kiev have a Catholic patriarch?