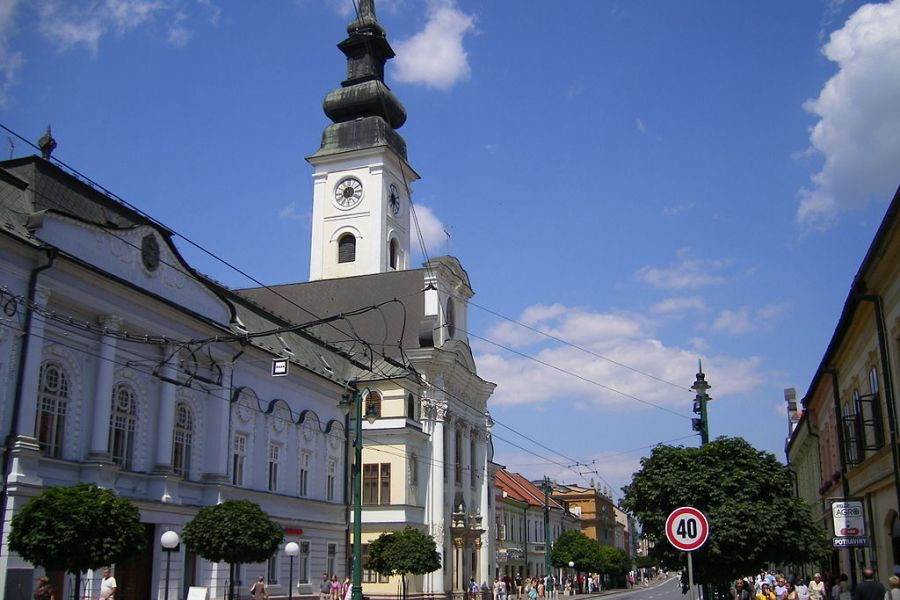 When Pope Francis visits Slovakia in September, one of his stops will be PreÅ¡ov. Located to the east, the city was part of the Kingdom of Hungary until the mid-20th century and is home to many of the country’s more than 200,000 Byzantine Ruthenian Catholics.

Although the official visit schedule has not yet been released, according to a source, Pope Francis may, on September 14, celebrate a Byzantine rite Divine Liturgy during his stay in PreÅ¡ov.

In April, Byzantine Catholics in Slovakia and around the world celebrated the 375th anniversary of the Union of Oujhorod, an agreement that brought the Ruthenian Orthodox Church into fellowship with the Pope after nearly six centuries of schism.

In 1996, Saint John Paul II wrote a letter for the 350th anniversary of the Union of Oujhorod.

He declared that union â€œconstitutes an important moment in the history of a Church which, by this act, reestablished full union with the Bishop of Rome. It is therefore quite understandable that I too join in the thanksgiving to God of all who rejoice at the memory of this important event.

â€œThe facts themselves are well known,â€ he wrote. â€œOn April 24, 1646, in the church of the castle of Uzhorod, 63 priests of the Byzantine rite of the eparchy of Mukachev, led by the Basilian monk Parthenius Petrovyc and in the presence of the bishop of Eger, George Jakusics, were received in full communion with the See of Peter.

Daniel ÄŒernÃ½, a Slovak and Catholic historian of the Byzantine rite, spoke to CNA about the importance of the Union of Uzhhorod, which was signed by 63 members of the Ruthenian clergy in 1646.

“This union must also be placed in the general picture of the time: it was the middle of the 17th century, when there was a lot of unrest in the history of this region,” he said, explaining that there had been civil, feudal wars. uprisings and clashes between Protestants and Catholics, represented by the Habsburgs.

He said that the Union of Brest, in 1596, showed the Ruthenian Orthodox Christians that it was possible to “preserve your rites, your traditions and still be part of the Catholic Church”, which was then supported by the government, protected from oppression, and gave equal social status to the clergy. The Brest Union united the Orthodox Christians of the Polish-Lithuanian Commonwealth with the Holy See, which gave birth to what is today the Ukrainian Greek-Catholic Church.

The Uzhhorod Union “has therefore contributed to an overall improvement not only in the structure of the Church but also in the quality of religious life” for Eastern Rite Catholics in the region, ernÃ½ said.

Saint John Paul II said: â€œThe joyous commemoration of the Union of Uzhorod offers a favorable occasion to give thanks to the Lord who dried the tears of his children at the end of a tragic period of severe persecution.

The Lord â€œsupported them in such a difficult period of their history, allowing them to preserve the richness of their Eastern tradition and at the same time to remain in full communion with the Bishop of Romeâ€, he continued.

â€œThey thus bear witness to this universality which makes the Church a diverse reality, capable of embracing, under the charism of Peter, this legitimate variety of traditions and rites which, far from harming its unity, manifests all its richness and its splendor.

On the anniversary of the union in April, celebrations were held at the Ruthenian eparchy of Mukachevo, which was formed as a result of the Union of Oujhorod and is located in what is today the western Ukraine.

“These are all the spiritual daughters of Mukachevo’s eparchy, and all the faithful and clergy of these ecclesiastical structures derive, or are really the heirs, of what was then the Union of Oujhorod,” said the historian.

He said that Pope Francis’ trip would be a good opportunity for him to visit the eastern and poorer part of Slovakia.

ÄŒernÃ½ said that like many places around the world, the coronavirus pandemic has isolated people and exposed deeper divisions in society, but the Pope’s visit is eagerly awaited.

“It seems that all of Slovakia are looking forward to this visit,” he said.

The majority of the Slovak population is Catholic, but the ruling political party in the country is rather liberal, ernÃ½ explained. Yet the enthusiasm for the Pope’s visit seems to unite both practicing Catholics and those who are not.

“I really hope that [Pope Francis] will bring calm, peace to the faithful, â€he said.

â€œThis time reveals how deep the divisions between people are. Especially during the pandemic situation where many people lost their social contacts and became much more isolatedâ€¦ â€

He said that a painful division is emerging in Slovak society. “And what we really need to focus on is bringing peace.”

â€œOf course, peace can only be achieved through Christ. So this is probably what the people expect from the Pope’s visit – [for him] to be the messenger of hope and peace, â€said ernÃ½.

Debate on Ethics and Religion: What’s Special about a Place of Worship? Part 1