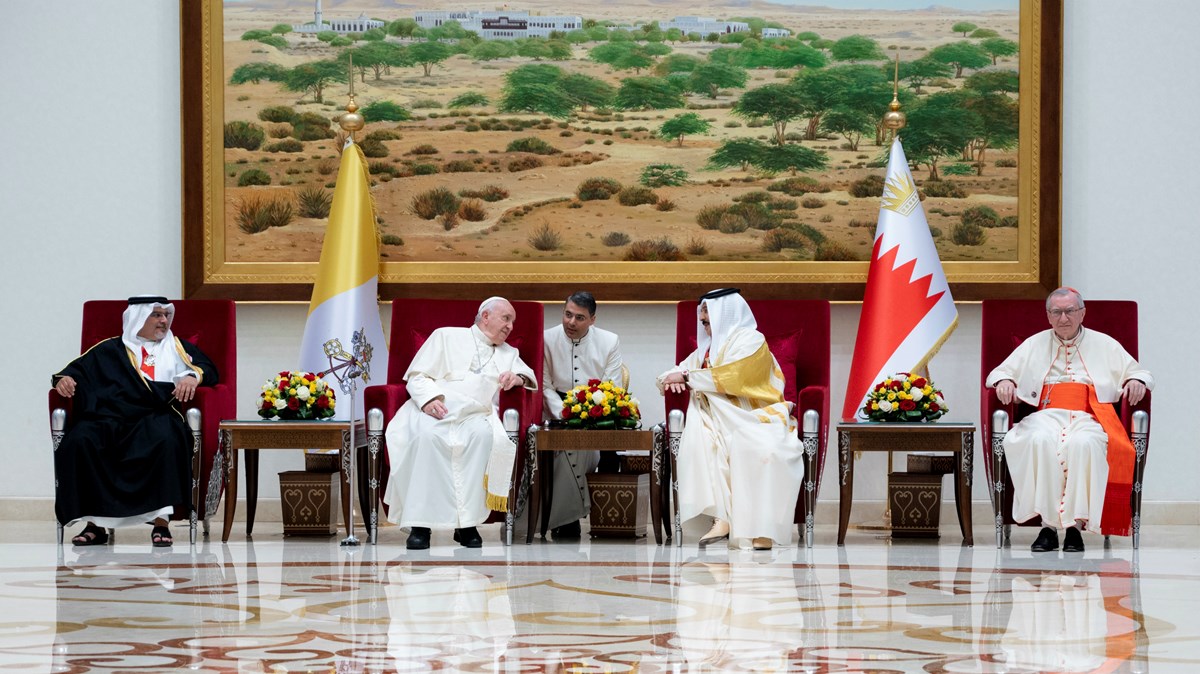 Pope Francis in Bahrain: a royal reminder of the ‘fr…… | News and reports

After greeting Pope Francis last week with a red carpet, a 21-gun salute and a contingent of horses to accompany his humble vehicle, King Hamad bin Isa Al Khalifa pointed to a document to characterize his kingdom:

The 2017 Kingdom of Bahrain Declaration.

“[Bahrain is] a cradle of mutual coexistence between followers of different faiths”, he said, “where everyone enjoys, under our protection after that of Almighty God, the freedom to perform their rituals and establish their places of worship, in an atmosphere of familiarity, harmony, and mutual understanding.

With Bahraini flags waving side by side with the Vatican banner, Francis was abundant in his praise. Enduring severe knee pain, he noted the country’s centuries-old ‘tree of life’, a 32-foot acacia that somehow survives in the Arabian desert.

The tree honors its roots.

“One thing stands out from the history of this land: it has always been a meeting place between different peoples,” Francis said. “It is in fact the life-giving water that the roots of Bahrain continue to feed on to this day.”

In the island nation the size of New York, flanked on either side by Iran and Saudi Arabia, from November 3-6, the pope visited his 160,000 Catholic migrants, mostly from the Philippines and the United States. India, living among a population of 1.5 million divided between foreign workers and citizens.

From 111 nationalities, 30,000 gathered last Saturday at the national stadium for mass.

Bahrain is a Sunni Muslim monarchy ruling over a small majority of Shiites. Christians make up 10-14% of the population, with up to 1,000 Christian citizens from Iraq, Palestine and Jordan who were present at the time of independence. Next to a 200-year-old Hindu temple, a renovated synagogue hosts the prayers of the few dozen Jewish citizens of Bahrain.

But in addition to pastoral responsibilities, Francis came ready to preach.

At the Bahrain Forum for Dialogue: East and West for Human Coexistence, his message was a quasi-homily on the 2017 declaration. Speaking to more than 200 religious leaders in the Gulf, he urged their leadership and introspection.

“It’s not enough to grant permits and recognize freedom of worship,” Francis said. “It is necessary to achieve true freedom of religion.”

The Bahrain Declaration, one of many similar charters issued by Muslim nations in recent years, has two main features. First, it was issued by the head of state, rather than an assembly of clerics and scholars. And second, where others spoke only to clearly defend the rights of Christian minorities, King Hamad’s document asserted that “freedom of choice” is a “divine gift”.

Bahrain does not proscribe any legal sanction for apostasy.

Francis’ message to the forum was discreet, not drawing the full implication of the statement. And his targets were many. He spoke of the need for education to counter religious fundamentalism. He promoted the role of women in the public sphere. And he called on listeners to oppose the agenda of the powerful that marginalizes the poor, migrants and the unborn.

But he centered his speech on prayer and the “meaningful relationship with God” that can only come with religious freedom.

His envoy, speaking to the press, provided the cultural context.

“I know a bit about the style of this part of the world,” said Paul Hinder, Catholic Bishop and Apostolic Administrator of Bahrain and neighboring countries. “They don’t like open criticism.”

“Religious freedom in Bahrain is perhaps the best in the Arab world,” Hinder continued. “Even if not everything is ideal, there can be conversions [to Christianity]who are not at least officially punished like in other countries.

The US State Department’s annual report on international religious freedom notes that converts in Bahrain are reluctant to speak out publicly, but for fear of family and social pressures, not government restrictions. And Abraham Cooper, vice chairman of the US Commission on International Religious Freedom (USCIRF), welcomed the statement.

“A lot of people talk about religious tolerance, but Bahrain lives it,” said the Center’s associate dean Simon Wiesenthal, who hosted the signature in 2017. “Just copy and paste this statement, and the world will become a better place .”

Francis’ visit was the 39th trip abroad of his pontificate, in which dialogue with the Muslim world was an important element. Two months earlier, he was in Kazakhstan and Bahrain was the 13th Muslim-majority place in his travel diary.

In 2019, in the United Arab Emirates, he co-sponsored the Document on Human Fraternity for World Peace and Living Together with the Egyptian Ahmed al-Tayyeb, Grand Imam of al-Azhar, the main center of learning in the world Sunni Muslim.

Francis referenced the document at the forum, and Tayyeb agreed.

“The Quran establishes…that man was created free and able to choose his belief, religion, ideology and doctrine,” he said. “It follows that they must be free to choose any religion.”

This is not yet true in many countries of the Islamic world.

In preparation for the International Day of Prayer for the Persecuted Church (IDOP), observed on November 6 and 13, the World Evangelical Alliance (WEA) has noted that 1.3 billion Muslims do not have the freedom to leave their religion, an act criminalized in 24 nations.

“The most dangerous thing you can do right now,” said WEA General Secretary Thomas Schirrmacher, “is to convert from Islam to Christianity.”

“I don’t think it’s that bad here,” said Johnnie Moore, invited by the king in his role as president of the Congress of Christian Leaders. “Much of what the pope said was meant to be heard in the region, including next door.”

“Bahrain is the most open and free country in the Gulf, then Kuwait, then the United Arab Emirates,” he said. “But it’s still a Gulf country.”

Agreeing with Hinder on the conversion, Jebejian said he believed the pope was indirectly calling on Bahrain and surrounding nations to give Christians the same freedom as Muslims in the West.

The Bible Society operates two bookstores in Bahrain, he said, one within the National Evangelical Church and the other within St. Christopher’s Anglican Cathedral. The nation hosted the Gulf’s first Catholic church in 1939 and last year opened the region’s largest, the 2,300-capacity Cathedral of Our Lady of Arabia.

There are no restrictions on their programs, Jebejian said, but to be more “comprehensive” – ​​quoting the pope – the practice of faith should also be welcomed outside of churches.

Critical analysts would also say: outside the mosque.

Bahrain is home to 598 Sunni places of worship and 763 for Shiites. But the “elephant in the room,” Amnesty International said, is the denial of full political rights to the Shia religious majority.

Saudi Arabia helped crush Arab Spring protests in 2011, and since then Shia activists have been arrested, deported and stripped of their citizenship. In 2016, the Bahraini government banned al-Wifaq, the main Shia opposition party.

Moore, a former USCIRF commissioner, warned advocates to be wary of Islamist political agendas seeking to protect religious freedom. The spiritual leader of al-Wifaq, he noted, is a known admirer of Iran’s Islamic Revolution and Ayatollah Khomeini. Still, he didn’t want anything to “distract for a second” from the beautiful gathering.

But USCIRF President Nury Turkel wanted the Pope to convey his concerns to the King. Even so, last year USCIRF removed Bahrain from its “special watch list” of offending nations, acknowledging improvements in recent years.

Without direct criticism and in accordance with his long-held conviction, Francis spoke out publicly against the death penalty. Since 2017, Bahrain has executed six prisoners. According to Human Rights Watch, 26 people are currently on death row, half of them for political beliefs.

And when Tayyeb called for an intra-confessional dialogue between Sunnis and Shiites, Francis hailed his initiative as “very courageous”.

But his public anger was directed outward.

“In the garden of humanity, instead of cultivating our environment,” Francis said, “we rather play with fire, missiles and bombs.”

An envoy from the Russian Orthodox Church was present. But lest his remark be interpreted one way, Francis called on religious leaders “not to support alliances against some, but means of encounter with all.”

And noting the Arabic meaning of Bahrain as “two seas”, his criticism was universal.

“Tragically, East and West are increasingly looking like two opposing seas,” Francis said. “We, on the other hand, are here together because we all intend to sail the same waters.”

Also in keeping with the pope’s style, the emphasis was on ecumenism rather than evangelism. Michael Lewis, Archbishop of the Anglican Diocese of Cyprus and the Gulf, praised Bahrain for its welcome to Christian communities and said they expressed a “comforting and overwhelming” appreciation to Francis.

And as the pope addressed the Muslim Council of the Wise, he returned to the image of the tree of life, this time in Eden. “Destined to embrace all of creation,” Francis said, human beings “turned their backs on the Creator” and “a flood of evil and death gushed out from the human heart.”

His answer: prayer and fraternity.

“Let us be guided by the word of Imam Ali,” Francis said, quoting the Shiite hero, Muhammad’s adopted son: “’People are of two types: they are either brothers and sisters in religion or similar men and women”. in humanity.

As he ended his apostolic mission in an address to the local clergy of the Gulf, the Catholic pontiff invoked the maternal intercession of the Virgin Mary. He also urged them to “spread Christian joy”, proclaiming the gospel in living witness.

And while he had previously urged the faithful migrants to ask for the grace to be kind to those who mistreated them by following the Sermon on the Mount, they were also to, through peace, “break the chains of evil.”

His last words invoked the imitation of the prophets.

“They challenge false human and religious certainties,” Francis said, “and they invite everyone to conversion.”