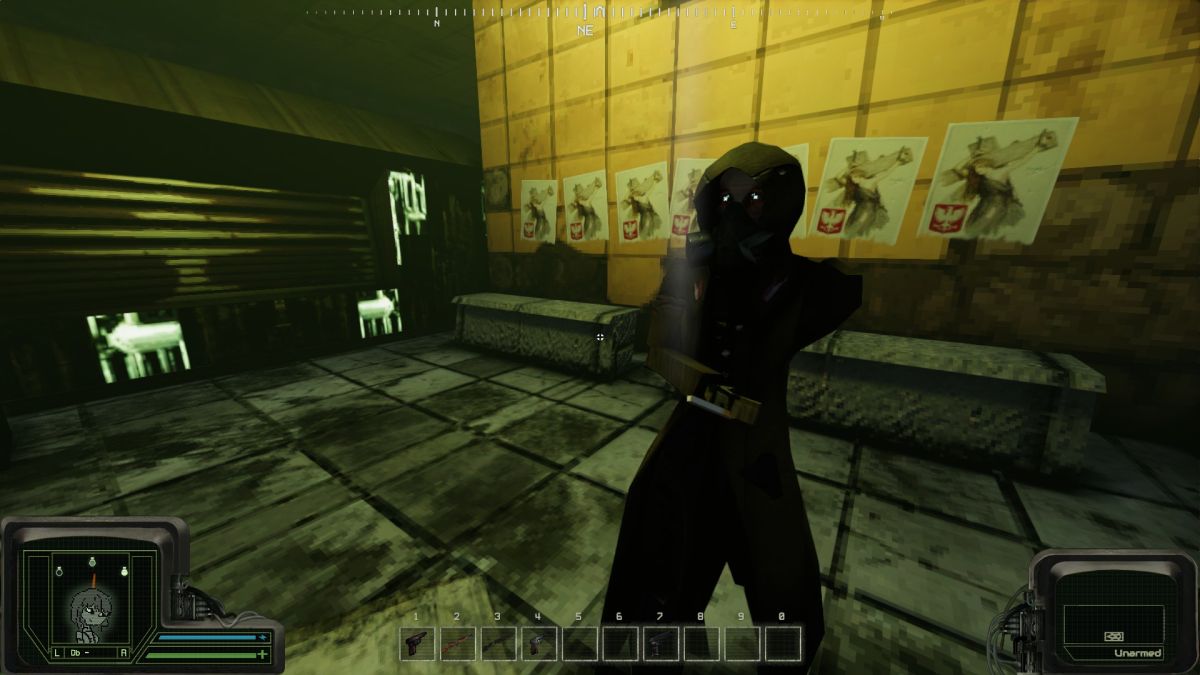 The first thing I did when I left the bar was stack crates out of an alleyway, so yes, Peripeteia is an immersive sim. You play as an ex-cyborg soldier named Marie, reduced to odd jobs and mercenary jobs in a town where the main source of heat and light comes from fires in the drum barrels. It’s Deus Ex except you’re Motoko Kusanagi from Ghost in the Shell, retired, in Poland.

The demo includes two missions and they are bigger than I expected. Huge towers, long corridors full of rubbish, roofs connected by pipes, underground tunnels. It’s a good thing that I can sprint forever, jump like it’s old fashioned and jump ledges which makes exploring so exciting.

It’s worth exploring because, of course, there are multiple ways to access each area. The bartender wants a key card from the gas mask thugs who have taken control of a neighboring building, which I enter by going up high. I pause to talk to a homeless rooftop about politics, because everyone in games like this wants to talk politics. The city belonged to the Soviet Union in the future of Peripeteia’s alternate history, and it is now being fought by various factions as well as scavengers in search of hidden caches of Soviet technology that may have been left behind. This is where I come in, myself a walking piece of leftover technology, called “living military surplus” in the Starting pitch.

I also try to talk to thugs, although I could have walked past them or just shot them. Their boss claims they are patriots, claiming what should be theirs, and we have a good talk about Soviet architecture before we make a deal. In return for the key card, I’ll have to put my cyber-soldier skills to use and kill a drug dealer they don’t like.

When I play immersive simulations, I usually end up finding an interesting route to a location when I leave it, and it’s the same here. I go out through an underpass, then after dealing with the dealer – the shoot is better than it’s ever been in Deus Ex – I find another way I could have taken in his apartment as well. Peripeteia is full of hidden places, accessible by climbing, taking a long detour, or hacking into a computer to unlock a door.

Note: this is the best hacking mini-game I’ve played in ages. You get a set number of attempts to guess a password within a given time, by pressing random keys that then flash red, yellow, or green. Green if you typed the correct letter or number, yellow if you are near and red if you are far. It’s a simple game of “hot and cold” played on your keyboard and I’m in it.

After exploring the neighborhood in depth, I collect the key card, put it back and take a train back to my apartment. A post-mission debriefing screen shows the train hurtling down the dark city, then moves on to the second half of the demo and finding a bunker full of Soviet tech. I’ll leave that to you to find out.

Peripeteia has a certain side to it, especially if you switch to third-person mode which allows you to see Marie’s animated face and goofy animations while sometimes sending the camera out of bounds. I don’t mind, neither the weird angles of the conversation scenes, nor the inventory of Tetris (actually, I like it). This demo has everything I want from a cyberpunk wind-crawler, and I can’t wait to go through each of the levels in the final game when it releases.

Peripeteia was funded through Kickstarter in August, raising its â‚¬ 10,000 goal more than three times. Its release date is scheduled for the end of 2022, and the demo is available on To smoke. If you are wondering about the name, “peripeteia” means the turning point in a story. It is a plot device. You know, like a deus ex machina.