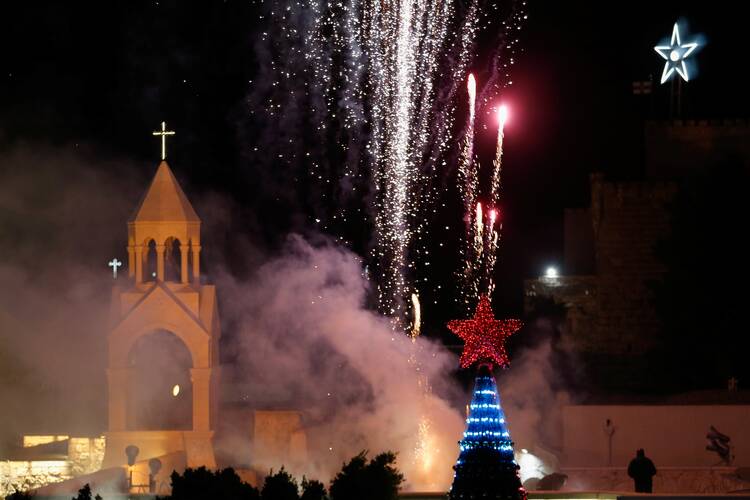 In a sobering message from the Holy Land, Latin Patriarch Emeritus of Jerusalem, Michel Sabbah, urged Catholics across the United States to recognize the small town of Bethlehem as it really is this Christmas, and not as that it is described in songs and tradition.

â€œAmid the nostalgia and old memories of First Christmas in Bethlehem, today there is a long-sustained religious romanticism,â€ he said. He called this Christmas romanticism “understandable … but not realistic”.

â€œWhen you celebrate Christmas, remember that in Bethlehem, in Jerusalem, life is not Christmas life. It is not the blessed life of the new redeemed humanity. The song of the Angels is far away.

â€œChristmas every year reminds us that there is no peace on earth, especially in Jerusalem and Bethlehem, and that we must do [peace] again, â€he said in a greeting to a New York-based Pax Romana group.

Patriarch Sabbah: â€œWhen you celebrate Christmas, remember that in Bethlehem, in Jerusalem, life is not Christmas life. It is not the blessed life of the new redeemed humanity. The song of the Angels is far away.

He declared that in the occupied territories, “everywhere there is a lack of justice”.

â€œWe know the pain. We taste the daily trauma. Unfortunately, we know that darkness still hangs over the Holy Night. We are to be the light of Christ, â€said Patriarch Sabbah.

â€œAs we focus on the Child Jesus, we must ask ourselves again: what about the children of Bethlehem, of Palestine? What about the protection and human security required for all of God’s children?

” In front of the [Israeli] occupation and insecurity, children are suffering, â€he said. â€œNatural innocence is stolen. Random violence and vulnerability deprive mothers of peace for their children in Bethlehem and throughout the Holy Land. “

Apparently referring to UN resolutions and the terms of the Oslo Accords that once seemed to offer a two-state solution to the Israeli-Palestinian conflict, Patriarch Sabbah said all the tough decisions have already been made and only the courage to see them through remain missing. He called on the political leaders of the United States and Israel to find this courage and urged members of Pax Romana to urge them to do so.

Patriarch Sabbah ruled the Latin Patriarchate of Jerusalem from 1987 to 2008, the first born Palestinian Patriarch in five centuries. In 2009, Patriach Sabbah, along with other prominent Palestinian Christian leaders, drafted the Kairos Palestine document which described the Israeli occupation of the West Bank territories as a â€œsin against God and humanityâ€.

Church leaders hope to establish “a special Christian cultural and heritage area to safeguard the integrity of the Christian Quarter of the Old City of Jerusalem and ensure the preservation of its uniqueness and heritage.”

The survival of the ancient Christian community in the Old City of Jerusalem was the subject of another statement from Christian leaders in the Holy Land this week. On December 13, the Patriarchs and Heads of Churches of the Holy Land, a group that includes leaders of the Catholic, Orthodox and Protestant Churches in Jerusalem, called for the protection of Christians living or visiting the Christian Quarter of Jerusalem and for the preservation of this neighborhood in danger. .

Church leaders hope to establish “a special Christian cultural and heritage area to safeguard the integrity of the Christian Quarter of the Old City of Jerusalem and ensure that its unique character and heritage is preserved for the well-being of the local community. , our national life and the world at large. They complained that Christians have become the target of “frequent and supported attacks by radical fringe groups” in a systematic attempt to drive the Christian community out of Jerusalem and other parts of the Holy Land.

According to church leaders, since 2012 there have been “countless incidents of physical and verbal assaults on priests and other clergy, attacks on Christian churches, with holy sites regularly vandalized. and desecrated, and continued intimidation from local Christians who simply seek to pray freely. and go about their daily business.

Patriarchs and religious leaders accused the “declared commitment” of Israel’s national leaders to the survival of the Christian quarter “to be betrayed by the failure of local politicians, officials and law enforcement to curb activities. radical groups who regularly intimidate local Christians. , assault priests and clergy, and desecrate holy places and church property.

The city’s Jewish quarter is already recognized and protected by Israeli law; religious leaders demanded a parallel status for the Christian quarter. Instead of this parallel treatment, they said that groups of “radical” settlers continue to acquire strategic assets in the Christian quarter, “with the aim of diminishing the Christian presence, often using underhanded dealings and tactics of ‘intimidation to evict residents from their homes, dramatically decreasing the Christian presence, and further disrupting historic pilgrimage routes between Bethlehem and Jerusalem.

Patriarch Sabbah called Jerusalem a holy city where peace and solidarity should prevail, but which is instead torn by conflict and discord due to the actions of powerful political forces.

Although there was no official response from the Israeli government to the Patriarchs’ statement, on December 14, President Isaac Herzog and First Lady Michal Herzog visited the city of Nazareth and met with church leaders. Christians at the Basilica of the Annunciation, where Mr. Herzog expressed the government’s commitment to the freedom of faith and worship of all religious communities in the country.

Addressing his audience in Arabic, the president called on “all of our brothers and sisters of faith around the world, and especially in the Middle East – Christians, Muslims, Jews, Druze and Circassians” to “always remember that we all pray to the same God and that we all want a life of peace and partnership based on understanding and brotherhood.

Only then, he said, “from our deep and shared faith in the Creator and …

About 13,000 Christians live in Jerusalem, including about 6,000 in the Christian Quarter of the Old City. Various civil bans on building or expanding homes for Christian and Muslim Arabs have been controversial, especially in comparison to the generous official treatment of property claims by Jewish Israelis.

The Jewish quarter of Jerusalem is already recognized and protected by Israeli law; religious leaders demanded a parallel status for the Christian quarter.

On December 17, another prominent Catholic leader expressed frustration at another Israeli policy that appears to offer preferential treatment to Jewish visitors to Jerusalem. A Jewish roots program, Birthright, was allowed to bring in participants despite the ban on other visitors. Allowing young Jews from abroad to come to Israel while banning pilgrims and Christian tourists during the Christmas season is discriminatory, Wadie Abunassar, counselor to the Assembly of Catholic Bishops, wrote on his Facebook page.

As the Omicron Covid-19 variant began to spread in late November, Israel closed its borders to foreign travelers, extending the ban until at least December 22. He did, however, allow participants in the Birthright Roots program to enter Israel.

â€œSuch discrimination is illegalâ€¦ and unethical,â€ Mr. Abunassar wrote. â€œRacist discrimination should never be accepted in any way! I urge the Israeli authorities to treat all those who want to visit the country on an equal footing, without any discrimination between one religion and another.

In a statement issued on Dec. 16, the Foreign Ministry said it “rejects and condemned” the “unfounded allegations of discrimination”, calling them “outrageous, false and dangerous”.

In his message to Pax Romana, Patriarch Sabbah called Jerusalem a holy city where peace and solidarity should prevail, but which is instead torn by conflict and discord due to the actions of powerful political forces.

â€œThe great of the earth have made Jerusalem a city of discrimination between peoplesâ€¦ they turn holy places into places of war. Today, Jerusalem is not in its natural status, the status of holiness as God wants it, â€he declared.

With reports from the Catholic News Service

Despite COVID, Christmas in Bethlehem brings joy back to hard times | Middle East | News and analysis of events in the Arab world | DW