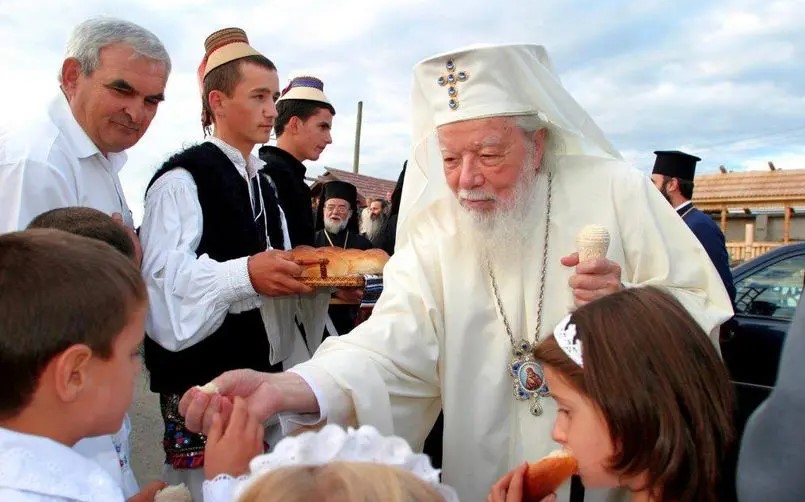 In a message marking the 15th anniversary of Patriarch Teoctist Arăpașu’s rest, His Beatitude Patriarch Daniel remembered his predecessor as a “pious and diligent hierarch” who spread the light of Christ’s light around him.

Patriarch Teoctist was the Patriarch of the Romanian Orthodox Church from 1986 to 2007. He rested on July 30, 2007 and was buried inside the Patriarchal Cathedral in Bucharest.

The funeral service was celebrated by Ecumenical Patriarch Bartholomew I, alongside Romanian Orthodox hierarchs and hierarchs representing other local Orthodox Churches. After the church service, the patriarch received state honors.

“Patriarch Teoctist remains in our memory, through all that he left us as a spiritual heritage of his personality and of his ecclesiastical and Romanian activity, as a sage, a patient shepherd and a pious and prayerful man”, underlined Patriarch Daniel in his message on July 30, 2022.

Patriarch Daniel’s message was read by Patriarchal Auxiliary Bishop Varlaam of Ploiesti, who celebrated a memorial service at the Patriarchal Cathedral on Saturday, July 30, 2022.

Patriarch Daniel praised his predecessor, who “pastored in times of communist oppression, but also of restless freedom, always in a missionary context that required great vigilance and fidelity, wisdom and struggle spiritual”.

“His prayer experience was a source of spiritual strength, courage and wisdom, kindness and forgiveness, dialogue and cooperation both in times of trouble and suffering and in times of new hope and many accomplishments.”

“In the hostile context of the communist regime, Patriarch Teoctist was for the Romanian Orthodox Church a diligent and wise shepherd, who worked for the preservation of the Romanian faith and cultural values ​​that are inspired by it.

“Patriarch Teoctist cultivated communion through fraternal relations full of light and warmth, carrying out a rich activity in the field of external ecclesial relations, promoting dialogue with the sister Orthodox Churches and other Christian communities and cooperation with European and world Christian organisations, as well as at the level of local inter-church relations”.

“Through all that he left us as a spiritual heritage of his personality and his ecclesiastical and Romanian activity, Patriarch Teoctist remains in our memory as a sage, a patient shepherd and a pious and prayerful man”, wrote the patriarch Daniel.

“Knowing his great diligence and devotion to the Church, the spiritual and cultural heritage left to us today, in a spirit of pious gratitude and esteem, we pay tribute with remembrance and honor to his memory as a great Romanian hierarch who guided the Romanian Orthodoxy Church in difficult times.

In conclusion, Patriarch Daniel offered prayers to the all-compassionate God to place the soul of Patriarch Teoctist in the tabernacles of holy servants, in the communion of saints, in the light, peace and love of the Most Holy Trinity .