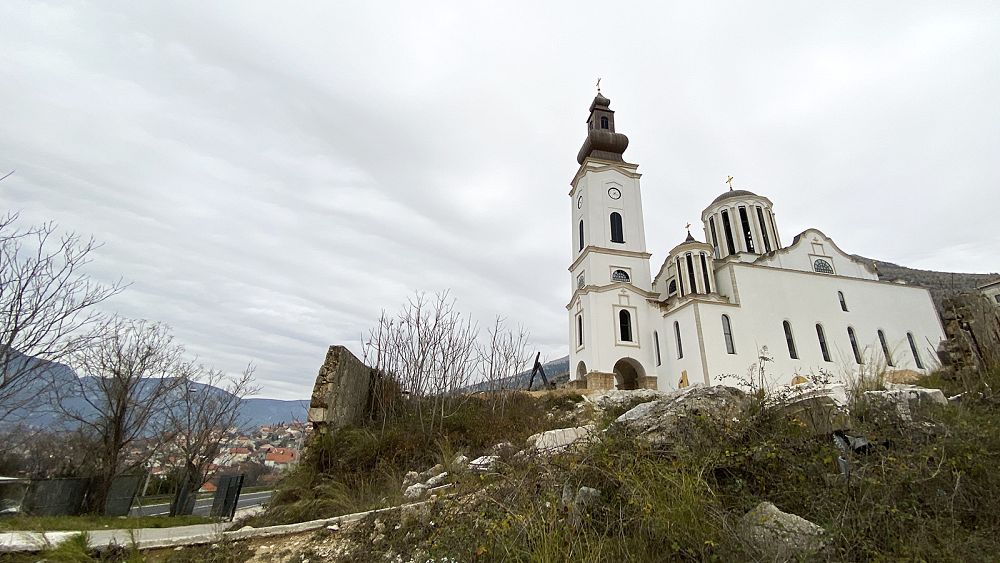 The rich skyline of Mostar, with its mosques and Catholic church towers looming over the buildings and leaning against a towering mountain range, again features the towers of an elegant Orthodox church – perched on a hill above on the east side of the city – after its destruction during the brutal war in the city almost 30 years ago.

The 19th-century Cathedral of the Holy Trinity is not yet ready for Mass and will not hold an Orthodox Christmas liturgy on January 7, two weeks after the celebration of Christmas Day in most parts of Europe western and central.

It will be the 29th consecutive Christmas that Orthodox worshipers in the Herzegovina region, the southern half of Bosnia, will not gather in the church that served as the main temple for that part of the country.

“We will be serving the liturgy in all the other churches in and around town, but the ongoing works and the cold make it simply impossible to do it there,” DuÅ¡ko KojiÄ‡, the parish or pastor of Mostar. the offices of the eparchy of Zahumlje, about 150 meters downstream from the temple.

Eparchies are provinces or territorial dioceses of the Orthodox Church, ruled by a bishop, each with its seat in a cathedral or “saborni hram” – usually the most representative church or the largest in the largest city in the country. region.

The Zahumlje, Herzegovina and Coastal Eparchy is headquartered in Mostar and oversees the Herzegovina region as well as parts of Dalmatia in neighboring Croatia and a small part of Montenegro.

The temple is included in the list of UNESCO World Heritage Sites and is a short walk from the Old Town which leads to the city’s most famous landmark, the Old Bridge with Sharp Arches.

It was the largest Orthodox church in the Balkans at the time of its construction.

It was first bombed in early June 1992, then seven days later it was set on fire and its steeples were knocked down. Eventually, the remaining walls were blown away.

This forced the eparchy to choose another church as the main temple, and it chose the more modest Temple of the Holy Transfiguration in Trebinje – some 135 kilometers south of Mostar – as its replacement.

Centuries of history destroyed during war

Before the conflict, Mostar was home to a dizzying array of cultures. The city sank into ethnic conflict, with civilians persecuted and forced into massive resettlement.

Today the two parts of the city which are divided by the deep blue waters of the Neretva River also mark the dividing line between its two main ethnic groups – the western part of Mostar has become predominantly Bosnian Croat. and the eastern part with a Bosnian majority.

The church was not the only UNESCO-protected monument in the town that was destroyed. Much of the historic center of Mostar, known for its slippery cobblestone streets lined with artisan shops, has been badly damaged.

Bosnian Croat forces also bombed and shot down the Old Bridge, a monument made famous throughout the former Yugoslavia for its frequent appearance in movies and music videos.

The number of Bosnian Serbs has also fallen sharply. What represented nearly a fifth of the city’s population according to the 1991 census was reduced to about 4,400 people or 4.2% in 2013.

Work on the reconstruction of the church did not begin until 18 years after its destruction, in 2010. Unlike many other places of worship usually linked exclusively to one ethnic group, the Orthodox Cathedral of Mostar was a beloved monument whose reconstruction has been delayed by politics, not the opposition. of the local community.

â€œIf you talk to people of Mostar of any faith or ethnicity today, you will see a great sense of sadness for the destruction of the church in all of them,â€ KojiÄ‡ said. He explains that this is what makes “Mostar what it is”, unlike the various communities of other conflicts which have maintained their divisions.

â€œAs citizens of Mostar, we do not feel any kind of division between us. And we don’t feel in danger in any way, â€he said. â€œPoliticians create this image of us divided and facing constant problems. They propagate this for their own benefit.

One of the most illustrative stories of its reconstruction, KojiÄ‡ points out, concerns its bell tower. Three people from Mostar – a Serb, a Croat and a Bosnian – approached the church to donate money for the reconstruction of the bell tower.

â€œThey came to see us and they insisted as truly religious people on remaining anonymous – the highest form of love is to do a good deed without anyone knowing it, without anyone slapping you. the shoulder. “

â€œSo we thought about what to do with their donation and decided that the three clocks on the steeple would now show the time in ancient Roman, Arabic and Slavic numerals. And the church and the city would be less beautiful if we didn’t have these three separate clocks now, â€says KojiÄ‡.

The largest Orthodox church in the Balkans

Although the Eparchy of Zahumlje historically has its headquarters elsewhere, it was moved to Mostar as the largest city in the region at the end of the 18th century.

The eparchy needed a large and lavish church as its main temple – something the city had not until now.

The local devotees organized a campaign to raise funds among themselves, and its construction began in 1863. It was built in record time, around 1873.

â€œIt is a witness to the city’s golden age, to the presence and wealth of the local Serbian population,â€ KojiÄ‡ explains.

â€œThe size of the temple is decided based on the number of people who come to the service. And the location has been chosen so that you can see it from any entrance to the city, both west, south and north.

Mostar, a trade hub near three countries and close to the Adriatic Sea, wanted to use the church in its ongoing rivalry with the country’s capital, Sarajevo.

“They [citizens] said we have the money and the location, but they also came with a request. And the request was to allow them to make the church bigger than the one in Sarajevo.

Permission was granted and Tsarist Russia and the Ottoman Empire made donations for its construction.

In addition to the city’s worshipers who funded the construction of the church, other citizens of all ethnicities also helped.

â€œIt took them 10 years to build it. Now it took over 11 to bring it back, and we still have no idea when it will be finished.

â€œBuilding it so quickly without the mechanization or building materials we have available today shows you the kind of love and unity they showed in building the temple,â€ he said.

â€œYou had given tasks to the inhabitants of the neighboring villages – one village would be responsible for bringing water from the Neretva, while another would prepare lunch for the workers. “

“I think it’s a good kind of rivalry, which forces you to get better.”

The town’s old church, located just behind the Cathedral of the Holy Trinity, was also the site of the country’s first mixed school.

The award-winning Bosnian poet Aleksa Å antiÄ‡, famous for his poems about Mostar and immortalized as the author of one of the most famous songs of the country’s traditional musical genre, the sevdah, learned to read and write there.

“You devotees of the East”

The Serbian Orthodox Church is one of many Eastern Orthodox churches around the world whose differences in practice and doctrine from those of other Christian denominations, such as Catholicism or Protestantism, are relatively unknown in the West and are less important in popular culture.

After the Great Schism of 1054 split the main faction of Christianity into two separate Churches, the Roman Catholic Church and the Eastern Orthodox Church, due to ecclesiastical differences and theological disputes, the two took completely different paths.

While the Roman Catholic Churches in different countries remained linked and ruled by their headquarters in the Vatican, the various branches of the Orthodox Church were much less connected and centralized.

This meant that the Roman Catholic Church could, over time, change its doctrine and practices more easily and administer the changes in a consistent manner. Orthodox churches have each kept their own rituals and ceremonies largely intact for centuries.

Besides being different from Catholic rites, they can also vary considerably even from one region to another.

According to KojiÄ‡, the Serbian Orthodox custom of burning a young oak tree or badnjak on Christmas Eve, believed to represent the way the manger was kept warm when Jesus was born in Nazareth, “would likely raise eyebrows” to a devotee of the Church. Russian Orthodox Church. .

At the same time, some traditions have infiltrated more than one religion.

But sometimes even the locals are confused.

The invitation to their annual concert – which often includes both church choirs and well-known rock bands – can be overwhelming at times.

The root of the “confusion” is that the Serbian Orthodox Church still uses the Julian calendar – promulgated by an edict of Julius Caesar in 45 BC – as opposed to the commonly used Gregorian calendar, introduced by Catholic Pope Gregory XIII. in 1582.

â€œSo when we send out invitations for the 2021 Christmas concert, and the card says the event is January 7, 2022, people are confused and call us to clarify,â€ he laughs.

Walking between bags of cement and construction tools, he is cheerfully greeted by a group of construction workers at work in freezing temperatures.

The facade was completed earlier this year, KojiÄ‡ points out, but interior work will take some time, especially since the frescoes that will cover the walls and represent Orthodox Christian saints – a hallmark of all Orthodox churches – take a lot. time to do correctly.

â€œWe suggested that using modern materials would make the job both faster and cheaper, but UNESCO refused,â€ he says as the workers deftly climb the scaffolding covering the inside of the building. church.

“So now we have to wait,” and that suits him, KojiÄ‡ explains.

Most important for KojiÄ‡ and the other parish priests who serve the cathedral, it is the citizens of Mostar who will come to visit it once it is completed.

â€œThe church has no value other than a pretty building. The people who come there make it a church.

And it is open to all its citizens, regardless of their faith, he stressed.

“We look forward to welcoming the Bosnians and Croats to Mostar as well – Christmas will never be Christmas without them,” he concluded.

Every weekday, Uncovering Europe brings you a European story that goes beyond the headlines. Download the Euronews app to receive a daily alert for this and other last minute notifications. It is available on Apple and Android devices.