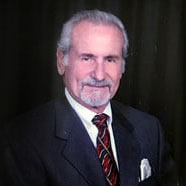 In an extraordinary manifestation of love and devotion to Our Blessed Mother Church, Theodore and Mary Athanasakes Joint Living Trust donated $ 431,054.02 to the Order of St. Andrew the Apostle, Archons of the Ecumenical Patriarchate .

After a long and productive life marked by multifaceted service to the Greek Orthodox Church, Archon Theodore â€œTedâ€ Athanasakes passed away on November 29, 2017; his beloved wife Mary, to whom he was married, herself passed away in 2019.

Archon Ted had a distinguished career with ground support for Project Apollo, as well as with the Department of the Navy. For many years he was a dedicated parishioner of St. Catherine’s Greek Orthodox Church in West Palm Beach, Florida. In 1976, Archon Ted started the annual Greek Festival of Saint Catherine and has served as the festival president on several occasions. He served numerous terms on the Parish Council of St. Catherine and served as president on several occasions, most notably during the planning and construction of the Hellenic Cultural Center of St. Catherine in 1979.

One of the greatest gifts Archon Ted gave to church was his love of dancing and music. In 1986, he became an advisor to the dance group Sainte Catherine’s Heart of Greece, which sometimes had more than 50 children. He researched Greek music and produced recordings that the dancers performed on. He has traveled with the dancers and chaperoned them on countless performances across the United States, encouraging young people to stay in touch with the Greek Orthodox Christian faith and keep Greek culture alive.

In 2001, Archon Ted was appointed to the Atlanta Diocese of Hellenic Dance Festival by His Eminence Metropolitan Alexios of Atlanta as the coordinator of the Southern Conference, and in 2005 he was named â€œAmbassadorâ€ of the Conference. of Southeast Florida, also by Metropolitan Alexios. In 2009 he was invested as Archon of the Ecumenical Patriarchate by His Holiness Ecumenical Patriarch Bartholomew for his outstanding service and commitment to the Church and the community as a whole, and as a well-known and respected leader. of the Orthodox Christian Community.

Xi’s Dream Could Be Others’ Nightmare | Harikumar column